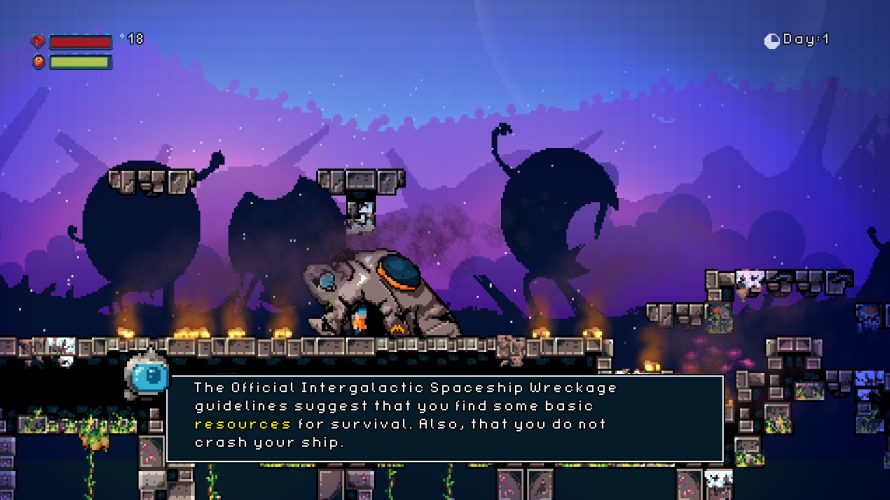 There are many ways to approach alien planets in search of alien tech, ancient lore, and other goodies. Crashing your spaceship into one? Probably not the best, and yet, that is where Residual kicks off, leaving you all by your lonesome in a hostile environment. Except you’re actually accompanied by the snarkiest of snarky… Personal Disaster Bot (PDB). Oh boy.

Alright. First of all, forget about mapping out the place for future runs as, seeing how Residual very much falls into the ‘survival’ category, planets are procedurally generated. Is this where PDB gets to shine, helping you navigate these hazardous environments? I somehow doubt it. Seems far more likely he’ll provide colorful commentary as you go about exploring, maybe sometimes helping you uncover the history of the planet. Maybe. My money’s on snark though.

As such, it’s pretty much up to you to get this party started by way of teleporters, force fields, and other sci-fi survival tools. You’re going to need everything you can get to stay alive, scavenging for food, making campfires, mining, and hopefully also repairing the ship at some point. Oh, and as you venture forth, mining ever deeper, hunger soon turns out to be the least of your concerns. How about some cosmic storms and mysterious ooze? Eek!

I should probably have mentioned this sooner, but… Residual is a non-violent affair, which means none of that running and gunning found in so OrangePixel’s other platformers. Speaking of which, another thing that’s become a bit of a recurring feature in his games does make a return: the beautiful pixel art!

I’m sure some of you are tired of that kind of aesthetic by now, but I’m still quite fond of it. That also goes for a genre entry with customizable survival parameters to ensure everyone gets as much or little challenge as they crave. Like me, who’d rather enjoy the story and experience than spend every second trying not to get completely demolished by a hostile plant. Which I believe is very much a thing in this game. The plant that is. Which will destroy you.