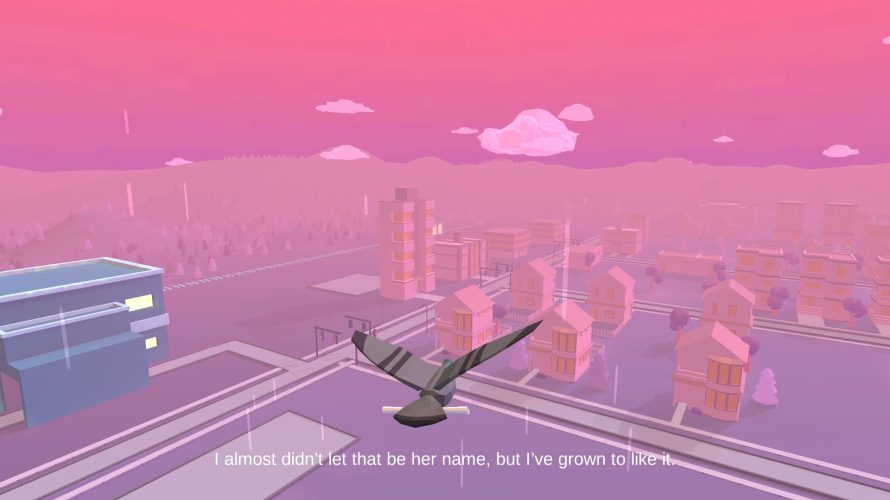 I’ve always enjoyed stories that manage to walk the fine line between letting the reader in on too much and not sharing enough to keep things interesting. Especially ones that know how to build with proper pacing. Homing, a game that has you playing as a messenger pigeon on a pre-determined path through a city, manages that quite well, which some might find surprising. I certainly did, and pleasantly so.

Prior to launching Homing, I read on its itch.io page that it was “SAD and QUEER”. My reaction? Opened my favorite text editor in preparation for this review you’re currently reading, because that combination – for some reason – generally results in a favorable experience for me. Little did I know just how SAD or how QUEER a game this would turn out to be, in spite of lasting only a handful of minutes. By which I mean that it hit all the right notes.

As you control the aforementioned pigeon, veering left and right, blue buildings acting as additional story bits, you’ll hear the contents of the letter you’re delivering. One that starts out as someone wanting to catch a friend up on what’s been happening, a letter of reminiscing with someone who’s moved away. It doesn’t take long before that idea is washed away, however, as more and more is read aloud, the curtain is pulled back, and the player realizes… exactly what’s going on.

To say that Homing is a bittersweet experience would be an understatement – at least in that of its two endings I got. Details about the current state of affairs in what I believe to be a small town are shared, what’s changed and what hasn’t; much like regrets and second thoughts. In fact, at the risk of repeating myself: it’s impressive how much a talented writer can convey over the course of a rather brief experience such as this.

Oh, the bird’s name! Great. Love it almost as much as how openly queer the story is, and on several levels, too. Nothing is wrapped carefully in metaphors or otherwise hidden behind synonyms. A spade is a spade, and… wait, how about you you take control of the messenger pigeon to find out for yourself? Be sure to bring a handkerchief though. You’ll very likely need it by the time Homing rolls its credits.

Homing is available on itch.io, carrying a $3 price tag.