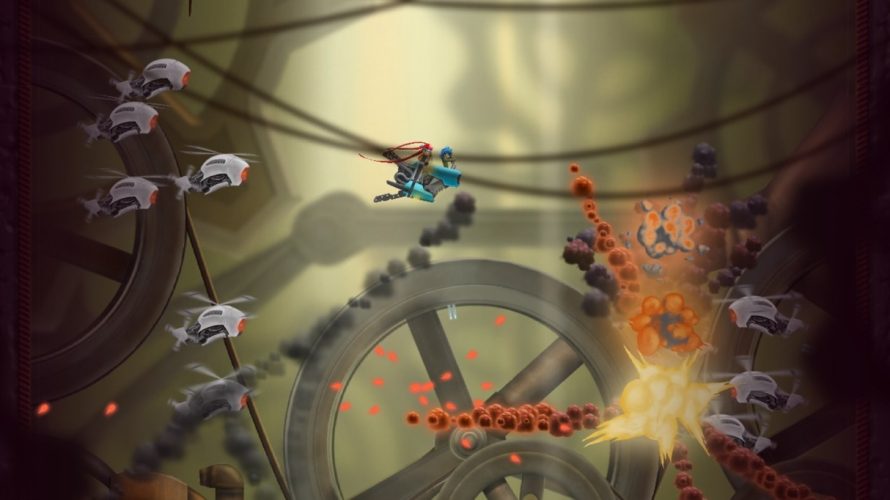 One by one, nations are being occupied by G.R.I.P. (the bad guys). Not cool. As such – unsurprisingly – your job as the Allied Nations (the good guys) is to stop them; maybe prevent a nuclear strike at the same time. Too late to say no because the clock’s ticking! Besides, what better way to start the day than with a suicide mission?

The plan in this against-all-odds campaign is to send a small team behind enemy lines, under the radar and all that, to encounter as little resistance as possible. But as is the case with most wars, that’s uncharted territory, so no one knows what the two soldiers – Rydia Cross, gunner and Rook Bishop, ace pilot – will have to face.

Shoot, bomb, explore and solve puzzles in order to put an end to the evil organization G.R.I.P. and their campaign to rule the world.

With Rydia wielding an M-177 Tank Buster and Rook flying the Dragon Mark V, firepower’s certainly plentiful, and even fun weapons await throughout the game, to really let ya put the hurtin’ on G.R.I.P.’s forces. Although surprisingly, given its twin-stick shooter roots, there are also environmental puzzles to be found in the game – some are even part of its boss fights! Oh and Metroidvania-style exploration, because, sometimes war needs to be ever so slightly different. Ya know? Of course ya do.

Now, before any of us will be able to go in guns blazing, there’s still the matter of getting Red Cobra funded. The goal is to hit $60,000 by November 13, 2014, and at the time of writing, $2,325 has been pledged. Not a lot, unlike the amount of time left (23 days), and this is where you can help. Spread the word, bust out your wallet, or both. Keep in mind that the latter will take but a moment of your time.

As far as the “why?” part goes, it’s quite simple: the team is more than willing to work on the game full-time, they simply lack the finances to do so. Solid reason, I’d say.