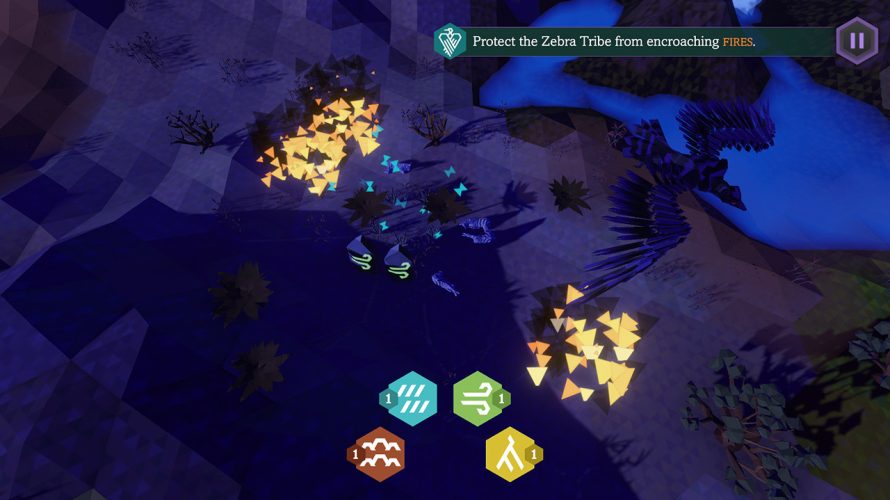 It’s time. Time for the Elephant Tribe in Quench to make its once-in-a-generation pilgrimage. Only… something is not quite as it should be, this time. Which is where you, the player, come into, well, play. Powered by the ability to manipulate the environment through elemental mysticism, you’re definitely the right choice for the job. The job of settings forests ablaze, drying up and creating new rivers, lakes, and trees – all that fun stuff that’s totally not going to completely ruin the Earth by the time you’re done.

Okay, so you’re actually here to help escort herds of animals safely through treacherous terrain with aforementioned powers, not “just” play a gone-mad-with-power god. Although that is undeniably tempting, I must admit. But alas, such would likely lead to an untimely game over, zero progress having been made prior. Which simply won’t do. Someone has to take care of those poor animals after all, and you know what they say: with great power… and so on.

Protect your herds as they are beset by flood, fire, drought, and the dark smokebeasts that have spread across the land.

As such, overcoming the temptation to simply wreak havoc across the land will likely be the first obstacle to deal with, after which the whole animal herding follows. Speaking of which, don’t ya just love the way everything looks? Might not be an art style suited for everyone, but I’m sure most will still agree that it is at least a gorgeous and rather fitting choice for an experience such as this. One which, unless you play it very safe and slow, will likely feature one or more casualties. Who’s to say what nature has in store for your ever-growing group of animals, after all, and whether you’re even properly equipped to deal with whatever Quench throws at you?

Quench is available on Steam, itch.io, and Switch, carrying a $19.99 price tag.