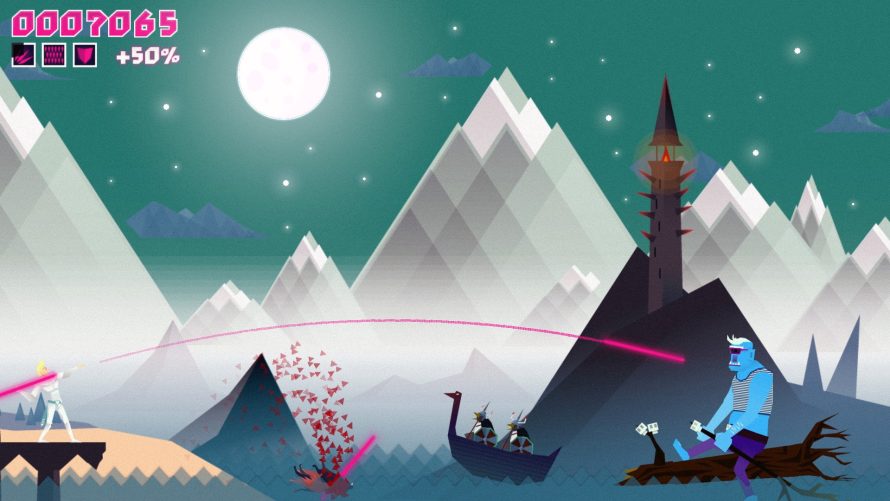 Have you traveled through time in a video game recently? Yes? Well, okay. Hm. Oh! Surely you didn’t visit the Ancient Germanic Future and got to puncture everything that moved with lichtspeer, as demanded by the lichtgods? Ah, you haven’t? Then the time (hehe) is right for a journey through the many battles found in Lichtspeer: Double Spear Edition! Bring a friend along for the ride too, because it is very dangerous to go alone. No really.

Still here? Great, because in case you hadn’t picked up on that part, the lichtgods are looking for a champion – someone to fight for their, well, entertainment. Someone like… you! Which is why Lichtspeer: Double Spear Edition – alone or with a friend by your side – has you spearing the crap out of all kinds of weird enemies. Who may or may not actually be hostile, but what can you do? The gods have spoken, so pick up the mighty lichtspeer and fight! Fight like your life depended on it, because, well, it actually does.

Decapitate your enemies with headshots, execute special attacks, and generate zuper massive combos to improve your score and impress your friends!

Survive enough encounters in this “über fantastisch mix of arcade action and lightspear-throwing simulation” and you just might end up with enough favor to acquire special powers of Licht. Based on the trailer below, you’re going to need every advantage you can get, fighting Wurst Zombies, Evil Spacedwarfs, Skater Walruses, and… uh… other things. Did I mention how the lineup is a tad on the odd side? Then again, you’re fighting in neon-soaked arenas, throwing magical glowing spears. The bestiary is almost normal by comparison. There’s even a groovy arena called the Disco Express. Doesn’t get much better, in the Ancient Germanic Future of Lichtspeer: Double Speer Edition, I’d say.

Lichtspeer: Double Speer Edition is available on Steam, via. the Humble widget, and on PlayStation 4, carrying a $9.99 price tag.

Lichtspeer: Double Speer Edition (PC)
Facebook Twitter LinkedIn Pinterest Tumblr WhatsApp Telegram E-mail
Previous article Become an Avatar of Nature in 'Quench' to Guide Animals Safely Through a Lo-Fi World
Next article 'Singled Out' Puts Players on the Clock With Only Ten Seconds to ID and Shoot the Criminal