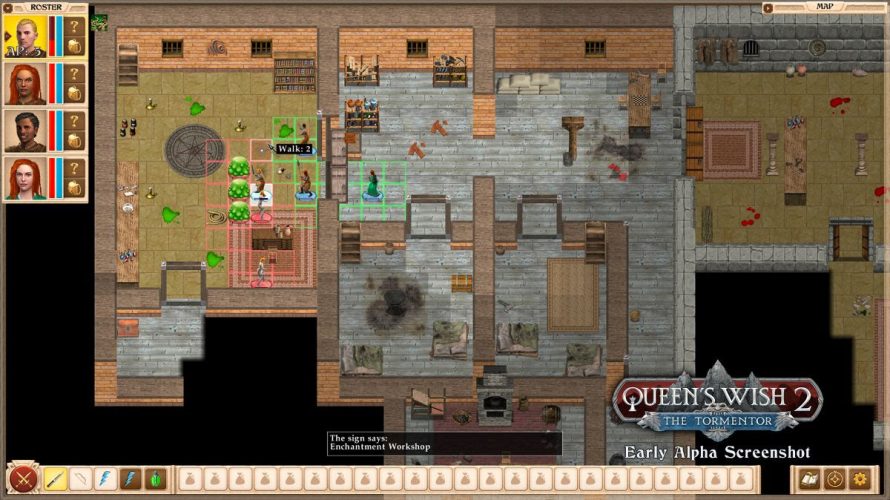 The saga continues with part 2 of the Queen’s Wish trilogy in Queen’s Wish 2: The Tormentor. Or rather, it will at some point, but for now, there’s crowdfunding to deal with. While most fans know Spiderweb Software for their RPGs, which they’ve been making since 1994, they’re no strangers to Kickstarter either as this is their third campaign. With a little luck, this too will end up succeeding long before the deadline. But… what’s the game about?

Well, from what I can gather… giving the middle finger to your royal family, following an assassination attempt. If you opt for that path, anyway. Spiderweb Software’s games tend to be full of choice-driven gameplay, and Queen’s Wish 2: The Tormentor will be no different in that regard. Diplomacy or battle, do the bidding of your royal family or play by your own rules, and so on. The world is yours to shape however you see fit. To quote the developer: “We create worlds in which you have the freedom to wander, pick a side to join, and choose your own path to victory.” Sounds pretty darn groovy to me. Never did understand why games in this genre had to abide by the classic – and frankly, at times rather stale – good vs./or evil setup.

The epic, indie fantasy adventure continues! Build forts, crush foes, use diplomacy, and restore your Empire! (Or betray it.)

All that said, no matter how diplomatic you choose to be, combat is inevitable as you go dungeon-crawling and/or, you know, ‘accidentally’ pick a fight with someone. While your arsenal of powerful abilities might seem like enough to settle these tactical bouts, it is still very dangerous to go alone, and as such, you should probably at least try to enlist some help to fill out the ranks – strength in numbers, and all that good stuff.

Just don’t forget to take a breather from all the slaughtering every now and then to get a haircut from your butler (which is actually a thing in this one), maybe build a fort or two, or simply take someone else’s to help improve your troops. Oh, and do keep in mind that minimizing potential bloodshed might also have other benefits. Like, you know, not spending resources to ensure your troops are in tip-top shape 24/7, ready for battle at a moment’s nice. Still might not be a bad idea though. Never know what’ll happen.

Anyway, seeing how this is the second part of a trilogy, like any developer worth their salt, Spiderweb Software took notes and learned more than a few lessons from the first – what worked, what didn’t, and such – detailing improvements, changes, and additions, in this blog post.

That pretty much just leaves the Kickstarter, which is at $9,002 of $40,000 at the time of writing, with 29 days to go. I have no doubt it will be reached – the stretch goals are another matter entirely:

I mean, the optimist in me says even the Android stretch goal will be reached, but time will tell. If you feel like helping Queen’s Wish 2: The Tormentor on Kickstarter, hit the links below; even if just to spread the word, as even that is undeniably helpful and it won’t cost a single cent either.

Queen’s Wish 2: The Tormentor will be on Kickstarter until September 16, 2021.