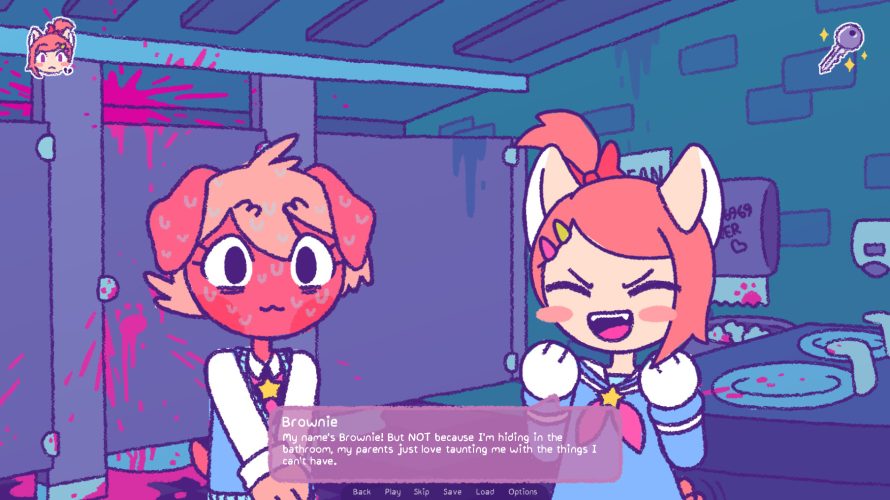 Olive is a dog on a mission. A mission to find that special someone… before demons have killed every last potential romance candidate. Suddenly the trials and tribulations the average human faces on Valentine’s Day don’t look so bad by comparison. But will Olive end up with Brownie the snack-loving corgi, Sparky the sporty husky, Patches the dalmatian bookworm, or none at all, in Purrfect Apawcalypse: Love at Furst Bite?

Before we go any further, however, mention has to be made of how Purrfect Apawcalypse: Love at Furst Bite is actually a remake of Purrfect Apawcalypse, featuring updated art, new music, dialogue, and other lovely tweaks/additions. I believe the original was released back in early 2019, meaning approximately two years later it’s had some QoL work done and now comes with a price tag, which is not exactly a bad thing – especially in light of how Purrfect Apawcalypse is still available, and free. Much like its two sequels, although that’ll change at the end of February.

Oh, and the game features “cartoon gore, bifurcated dogs, headless dogs, generally dogs not having a great time”. I know, hardly the scariest content warning ever, but eh, at least it fits the experience, which is described as “dark comedy interactive fiction”. I mean, demons are pretty much ruining Olive’s chances at romance, while I suspect he’s still more interested in that aspect than, you know, saving the world from the apawcalypse. Priorities. Yup.

Demons have been slaughtering their classmates and they’re certain it’s inevitable that they too will meet their untimely end… Which means there’s only so many dogs left to spend their last moments with!

In a bit of an unfortunate twist, Olive can actually very much perish in this tale, resulting in a big ol’ game over. No happily ever after if that happens. So be sure to make the right choices (because you can totally tell them apart – oh wait). Hmm… just try to be the best Olive possible. That’ll have to do. Surely, if you search long enough, true love shall reveal itself. Unless a demon beats you to the punch. Welcome to the apawcalypse!

Purrfect Apawcalypse: Love at Furst Bite is available on Steam and itch.io, carrying a $4.99 price tag.