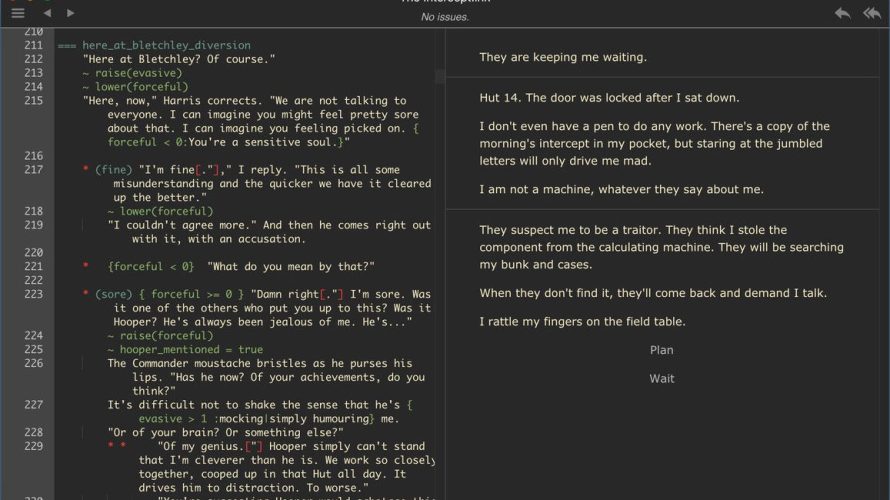 It’s been a long time coming, but ink – the incredibly flexible, open-source scripting engine – recently reached the fabled version 1.0 milestone, and while that does mean it’s ‘stable’, inkle is far from done working on their editor. There’s always going to be something to add or tweak, ya know?

Speaking of which, the update to 1.0 comes with a rather unique, yet very interesting new feature, described by its creator as ‘parallel, shared-state story-flows’. This enables switching between multiple currently ongoing conversations… while still allowing them all to affect each other. Confused? Eh, I’m not quite certain I fully grasp the concept either, but it does sound like something with a serious potential; a way to make your story come alive in new and exciting ways, as it were.

Ah, and since dark mode is all the rage these days, ink now has that too, alongside zooming, word count, a stats menu, and better syntax highlighting, among other lovely bits. Did I mention how it’s still free to use, or how incredibly powerful the language is? I mean, the current iteration did after all power inkle’s Heaven’s Vault (2019) and Pendragon (2020), while prior titles like Sorcery! and 80 Days used an older version of ink. Flexibility was definitely emphasized when building ink, and it shows.

Even more so once your project starts to grow, as the fact that code and technical information is handled via. mark-up should make things like proofreading and re-editing/making large-scale alterations easier, reducing the amount of potential rewriting required. Oh, and you’ll probably want to use inky to write and test, as it really is the tool for ink related tasks like that.