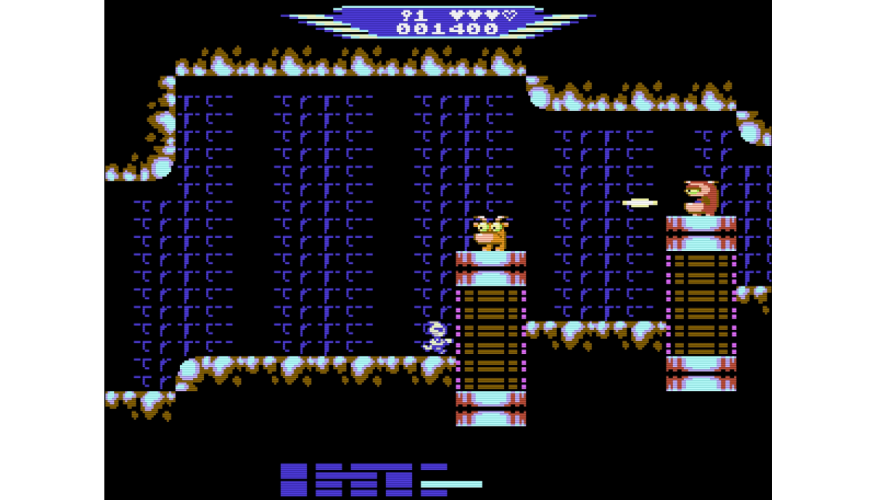 Most would likely associate the word ‘powerglove’ with Nintendo’s unpopular product, but in this game, it’s actually – for all intents and purposes – a weapon. A weapon capable of rapidly spewing projectiles, enabling the protagonist to dispose of evil robots on a quest to restore mankind’s only energy source. Without it, all is lost. But hey… no pressure, right?

As you can probably tell from the above screenshot, Powerglove is yet another ‘retro’ game, although unlike most which simply claim to be old-school in design, this one actually is. Its creator did after all originally build the entire thing to run on a Commodore 64 – how’s that for nostalgic dedication? While this [Windows, OS X, Linux] port does come with a few enhancements, like parallax scrolling, far as I can tell, everything else has been retained; right down to the awkward landing after jumps and respawning enemies.

Speaking of which, most of these fellas don’t really prove much of an obstacle, as one shot will eliminate most. This is somewhat balanced by your own health pool being quite finite though, as the fourth hit will result in a game over. No credits, checkpoints or saving. Just old-school run ‘n gun fun, complete with both an in-game and a PDF map, which should help with the exploratory aspect, to say the least. Note that the latter version does show where everything is, from enemies to various items, so keep that in mind if you’d rather enjoy an experience without such assistance.

Guide the hero through the polar thermal reactor complex, navigate the complex network of transport tubes, locate the five control diamonds and blast away every rogue robot that stands in your path!

Now, while most will probably be playing the Windows, OS X or Linux build of Powerglove, it is also available in its original Commodore 64 form; both as a downloadable version and in physical (ie. boxed) form. Groovy, eh?

Facebook Twitter LinkedIn Pinterest Tumblr WhatsApp Telegram E-mail
Previous article 'Zzzz-Zzzz-Zzzz' Has You Traversing Dream and Nightmare Alike, to... Wake Up?
Next article A Quartet of Greenlight Escapees to Keep an Eye On