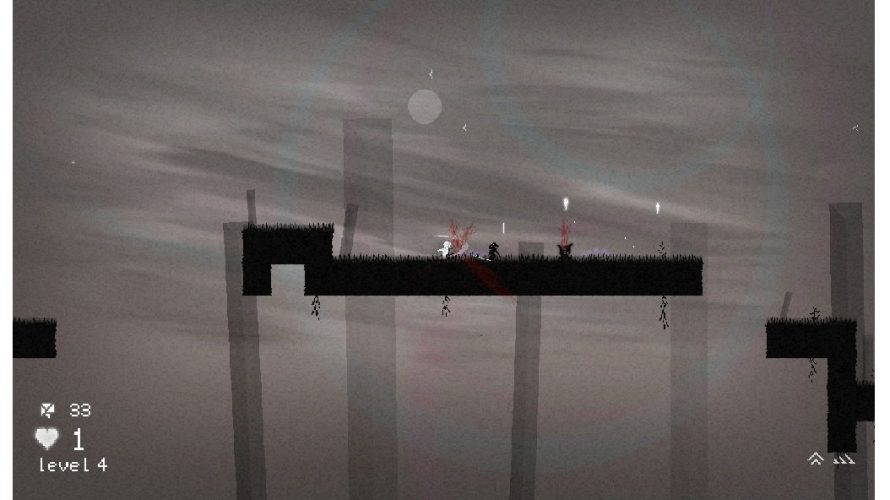 You know how some platformers feature an in-depth background story for its protagonist, acting as a motivator for many players? Well, none of that in Paperthin, as you’re immediately dropped into this dangerous world, left to fend for yourself, double-jumping over spike pits and slicing up bad guys as you go along. Oh and it sounds a lot simpler than it is, tight controls and all.

There’s no doubt that this one places a strong emphasis on minimalism, what with its grayscale visuals and very little in terms of ‘feedback’. That’s a good thing though, far as I’m concerned, as it also means less confusion while you attempt tricky platforming and fast-paced combat, to avoid losing health; It is, after all, a rather finite resource, and a grand total of fifty fragments (tiny white diamond-shaped figures) is required to replenish it.

It’s a fast, fluid and fun experience, and one which those with enough skill could potentially speedrun. That is if the ‘dash strike’ wasn’t such a pain to pull off, as I often found myself taking a hit instead of landing one, which is certainly less than optimal. Even more so, since this particular move is required to get rid of spiky blocks. See, in most games, such an obstacle should simply be passed by, but in this case, randomly generated levels and all, they could very well be blocking progress, which is annoying, to say the least.

Ah, did I mention that once your health is gone, that’s it? Yup. Back to level 1. That is unless you’ve actually reached level 8, 15 or ‘the end’, at which point heading left immediately upon starting a new game will let you jump to any of those. I never made it past level 4 though, as that was when the enemies got the better of me, every single time.

Nice variety among the lot though, new faces joining the crowd every so often, keeping you on your toes. The fliers were more troublesome than fun, but that’s just the way it is sometimes. Besides, minor frustrations aside, Paperthin is plenty enjoyable and seems to pack just the right amount of challenge, even if I am pretty bad at it.

Facebook Twitter LinkedIn Pinterest Tumblr WhatsApp Telegram E-mail
Previous article The Greenlight Groove: 'Désiré', 'Without Within 2' and More
Next article Get Spooked by the Pointy and Clicky 'Bulb Boy' Demo