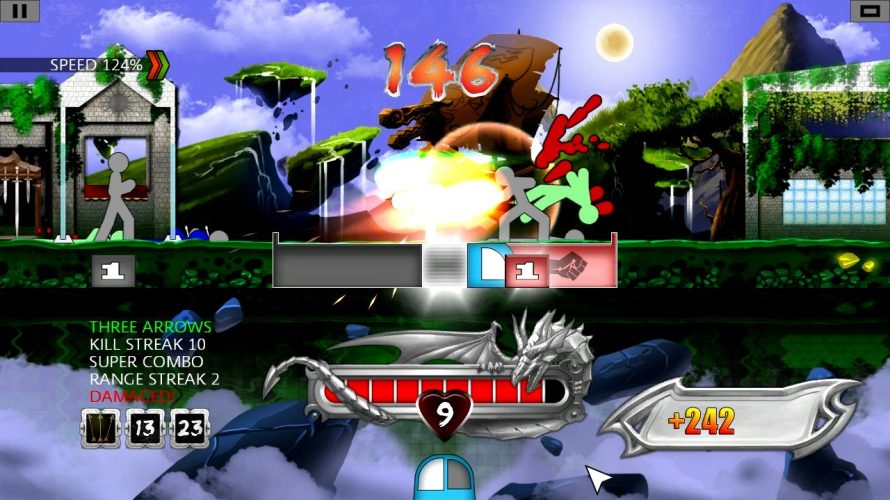 One stick figure ninja against an entire horde of enemies. They approach from the left, then right, then left again. Some require multiple hits to take down, others have an uncanny ability to dodge attacks, and then there are those… wait, did I mention this guy only has two buttons with which to defend himself? Also, he can’t move. Some ninja, huh?

In terms of controls, One Finger Death Punch is easily the most simple brawler I’ve ever played. Its two-button setup allows you to attack either left or right, and that’s it. Doesn’t mean it’s boring though, quite the opposite. There’s deep and challenging gameplay under the surface, and enough variety to keep fans hooked; at least for a while. But let’s take it from the top.

At first, everything’s simple, slow and easy. Enemies approach from either side of the screen and clicking either the left or right mouse button attacks in that direction. Note that button-mashing won’t get you far in this one, because unless an enemy is in the ‘zone’, it won’t connect. Missed opportunities leave you wide open for a counter-attack, and you’ll definitely want to avoid those, seeing how your health is finite. 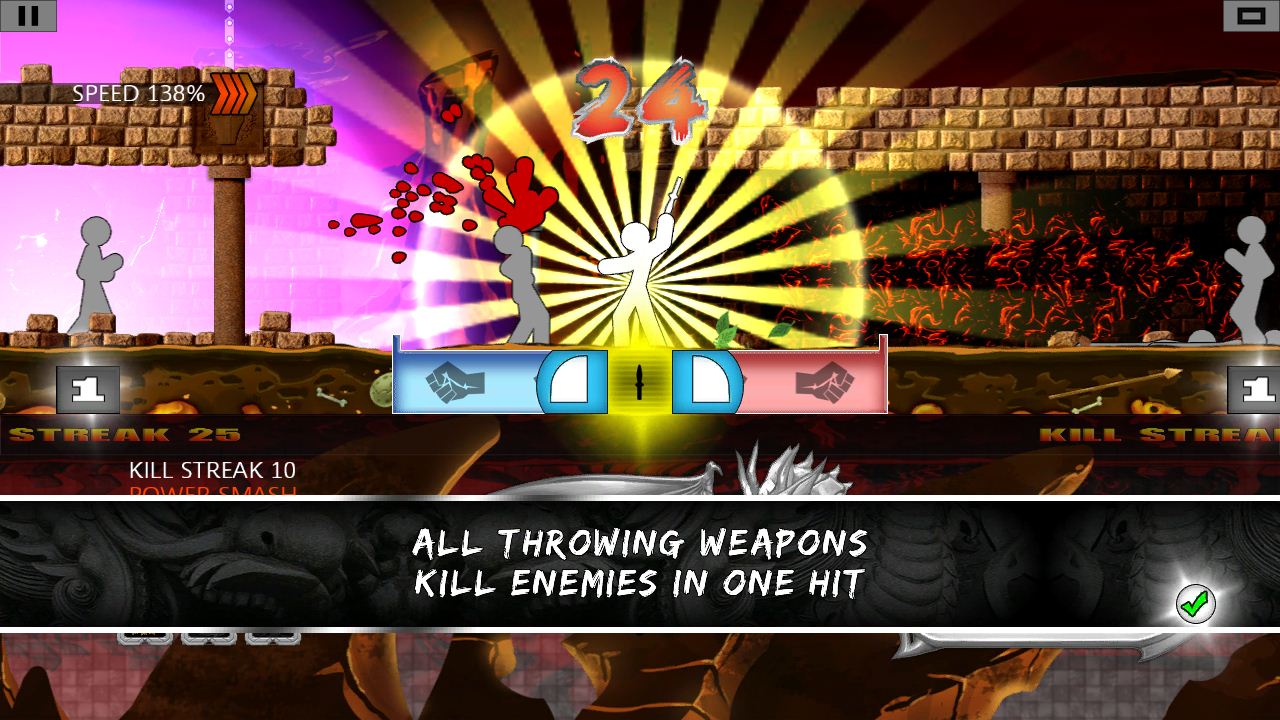 It’s a simple enough system that most will be able to learn after a few minutes, and the game does a good job of ensuring familiarity with each new addition before introducing another; the first of which is … weapons. Since enemies won’t hesitate to hurl these towards your face, it’s a good thing that you’re able to return the favor. Oh and thrown weaponry kills everything in one hit. Everything. Not entirely sure whether or not melee ones are actually advantageous or not though, but bows and daggers? Heck yeah. One hit – dead. Lovely.

However, no matter how interesting the combat of a brawler is, enemy variety is key to minimize repetition in terms of gameplay, and One Finger Death Punch did a fine job of mixing things up there. After a while, I did start seeing beefed up versions of the same foes as opposed to new versions of old ones. But at that point I was too busy focusing on my survival and beating the crap out of everything in sight, to really care. Left, right, left, left, right, right, dagger to the face… next! It was fast, furious and fun. Wasn’t easy, but there was rarely a dull moment.

Come to think of it, I’d recommend enjoying kicking and punching the basic gray stick figures while you can, because soon enough there’ll be those that dodge left and right (literally), often several times in a row, along with mini-bosses that are almost a rhythm game… along with the constantly increasing pace! Have to admit that there were times when I couldn’t keep track of what was going on, with so many different enemies starving for a boot to the abdomen or an arrow to the face, though. Since it wasn’t a frequent issue, I guess it could be chalked up to a mere obstacle to overcome (which I did, by the way – time and time again). 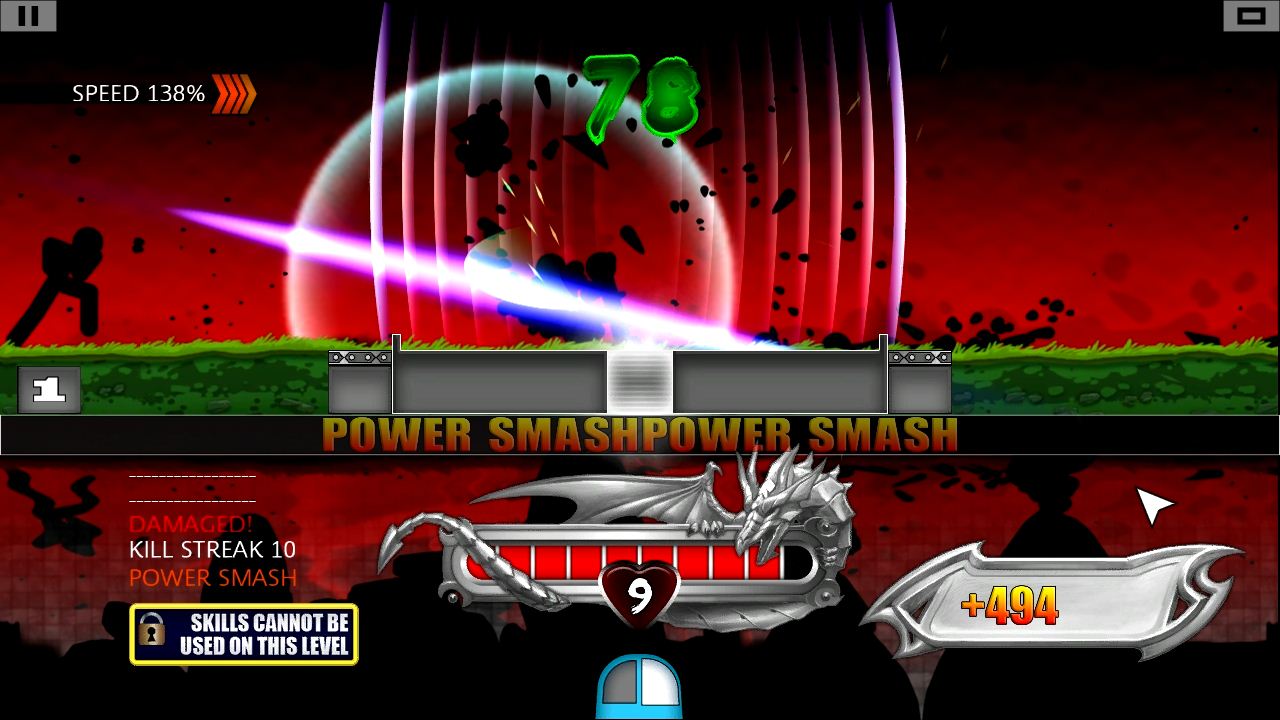 Considering the sheer amount of stages (or “rounds”), I’m glad they aren’t just limited to a single type, as simply fighting enemy after enemy over and over again would get boring fast. As you journey across the world map, which acts more as a hub area than anything else, you’ll get to experience lightsaber battles, boss fights, dodge challenges and more. My personal favorite is definitely the survival ones; what can I say? I like combining the challenge with a guaranteed victory!

In contrast, I utterly despised the ‘lightning’ rounds. Being unable to see the color of each enemy is far more challenging than one might think, and I had to replay these several times before I achieved sweet victory. The boss encounters can be interesting too, even if they are a more slow-paced affair than the rest, relying more on proper timing than being able to react quickly; I guess in a way, they were more… methodical.

Scattered across the aforementioned world map, you’ll also find a variety of skills, which give combat-related boosts. Some activate after a certain number of kills, providing a temporary buff, while others extend the use of a specific weapon type. Personally, I found the lot to be somewhat lacking, with the most useful being ones that ironically rarely saw any use. The one that grants 1 health after 99 kills might be fun in survival, but other than that, nothing noteworthy.

Speaking of, after reaching a certain point, you unlock a survival mode in the main menu, and this is where your skill will truly be put to the test. Figured I was good at the game, so I tried it a few times, hoping to unlock Blind Survival (“reach 500 kills in survival”); after the sixth defeat around 490 kills, I gave up. Turns out I overestimated my skill level somewhat. There are also two difficulty modes to unlock for the story, both of which require beating the final level of the previous to access. Plenty of content for those seeking a proper challenge.

Generally speaking, One Finger Death Punch is an impressive brawler. Some might find it a tad bit repetitive given its simple nature, but if you can look past that, there’s a fun and unique experience to be had here. Who needs complex controls and fancy visuals anyway? In this case, less is definitely more.

One Finger Death Punch is available from Steam, carrying a $4.99 price tag. .