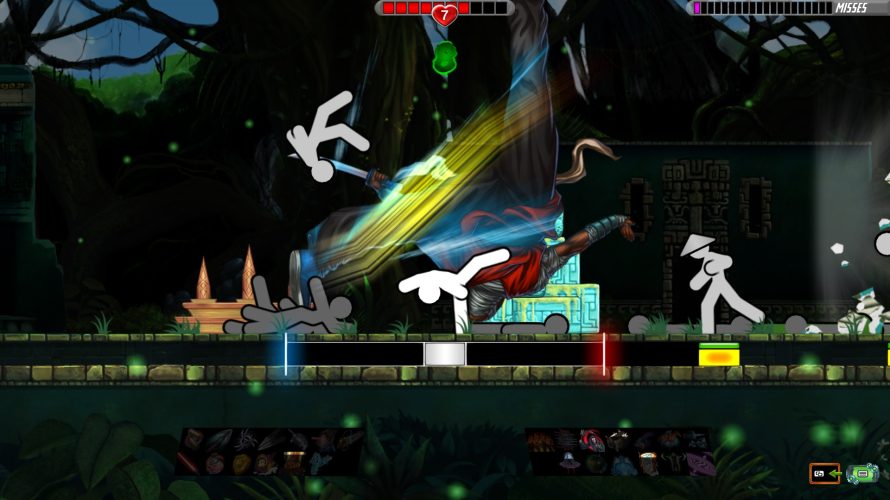 There’s no escape. You’re surrounded, numerous enemies approaching from both sides in One Finger Death Punch 2, and worse yet, you’re entirely unarmed! Or are you? Of course not, the deadly art of kung fu long since mastered. As such, it is time to punch and kick while looking like an absolute badass… with just two buttons. Because overly complex moves are for other fighting games.

Those not familiar with the original might be wondering how on Earth such a control scheme can provide any kind of depth or, better yet, fun. Well, anything’s possible in a video game, and rest assured that this much-improved sequel is more than capable of providing an experience with that ever so lovely “just one more try” appeal. For while the tutorial – which cannot be skipped, I might add – does make the whole thing seem somewhat simple and easy, believe me, that’ll definitely change.

“But how does it play?”, you ask, staring at the above screenshot in confusion? Quite well, I’d say! Oh right, I suppose a more in-depth explanation of just what is happening is in place, so let’s take it from the top: the stick figure in the middle of everything is you, and below him, a blue and a red zone/bar. The moment either of these fills up – and only then – you’ll want to hit the corresponding button to attack in that direction in order to thwart off an attack. While everything from an enemy to a projectile could be heading for your face, it’s all taken care of the same way – by a well-timed button press. Also, don’t mash, for an attack that doesn’t land will leave you open to a painful counter, and your health is a very finite resource. 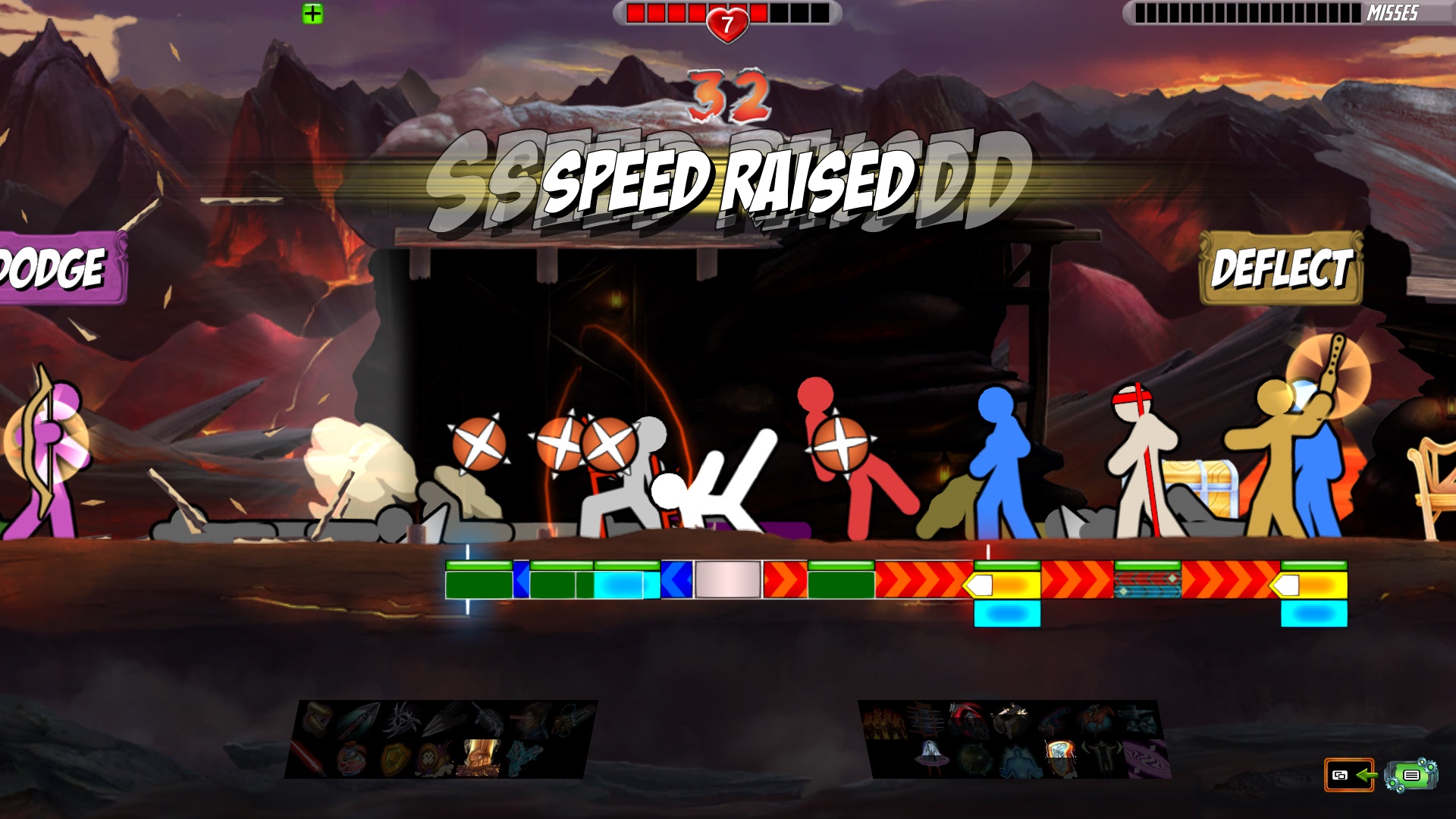 That’s just the core of the experience, however, and sooner rather than later, you’ll have to keep an eye on exactly what is rushing towards your stick figure (who, this time around, can be customized a fair bit), or pay the price. Enemy variety can be a bit of a problem if you’re unaware of how the colored bars underneath each work after all, as more than a few will actually leap to the other side after one or more attacks – sometimes even multiple times! Throw in several of these in a row and you’ve got the making of a proper battle, one which will test your spatial awareness as well as your ability to think fast… and react even faster.

Oh, and let’s not forget about the brawlers or boss encounters! Yeah. Given the challenge these two enemy types bring to the table as the pace quickens, it’s not uncommon to breathe a sigh of relief at the sight of more regular combatants. See, taking out even those who jump from side to side was rarely a problem during my time with the game, but brawlers? My goodness, the pace of these encounters was absolutely brutal at times, players forced to rapidly attack left/right in rapid succession (what was that about never mashing?), every other opponent somehow frozen in time during these. And bosses are even worse!

Take the ‘brawling’ mini-game and throw in a bunch of rapid left/right jumps in-between, and you’ve got the boss battles. They were quite rare in my experience, however, and unlike that of One Finger Death Punch, its sequel does provide players with optional benefits to make dealing with these somewhat easier. Even if the trigger, much like weapon drops, is quite random. But those moments when RNG is in your favor and a brawler or boss goes down in a single hit are just too darn glorious to be matched by anything else, really. 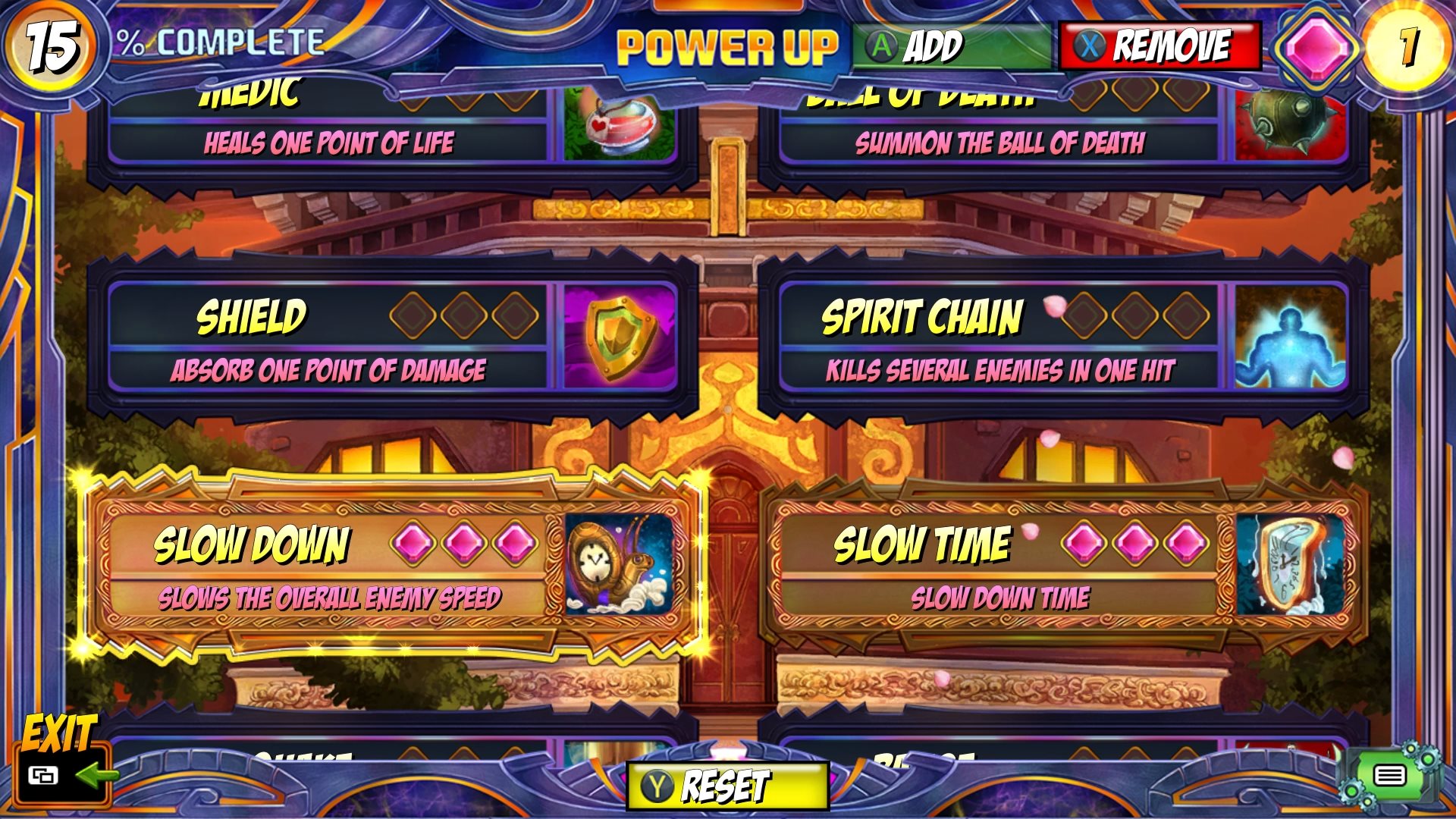 What am I talking about here? Oh right, forgot to mention that One Finger Death Punch 2 has a fully customizable skill tree, complete with free resets to allow for plenty of experimentation. This is an undeniably good thing, seeing how skill points are only found in certain levels in the ‘main’ mode, and only upon clearing said levels the first time (in other words, they are not easily acquired).

Said skill tree includes quite the variety of boosts, from additional ammo in weapons to the aforementioned death sentences to special enemies and one of my personal favorites, the chainsaw! None of these are required to trigger the effect/activation/spawn either, as their sole purpose is to increase the odds of it happening; like, say, going into ‘windmill’ (aka. auto attack) mode for x number of seconds. Getting a sniper rifle is also fun, or of course, the mighty chainsaw! Because what martial artist doesn’t enjoy the means to… shred his enemies? 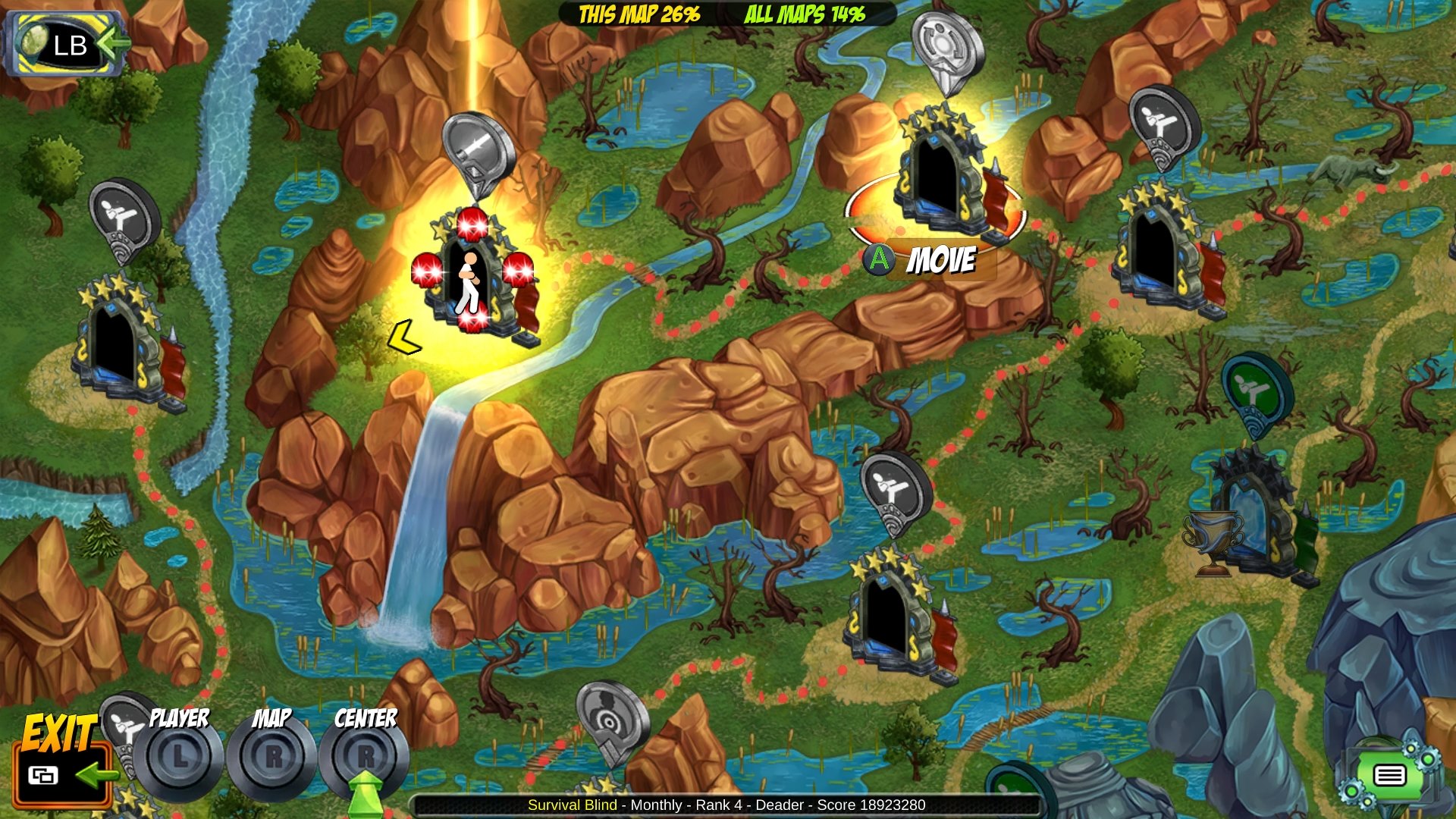 Now, while it can be tempting to simply jump into survival mode, climbing that ancient tower one tier at a time, I would strongly recommend traversing the main mode’s vast maps first, picking up as many skill points as you can muster along the way. Appropriately enough, these actually require players to stray from the path of progression, their levels only available on alternate paths leading to dead ends. Yes, this does mean you’ll have to work a bit more for them, but the reward is most certainly worth the effort. Because far as I can tell, skills work across every mode: levels (“story” mode), survival, gauntlet, co-op, and even no luca no. That last one is a bit of an odd duck in that it’s pretty much survival… with a cat obscuring your view at all times. Yeah. Fun and different, but also quite weird.

While I suspect survival is where most will be spending their time once a sufficient amount of skill points has been acquired, the amount of content in the game’s main mode is not to be dismissed either. Even though I only ventured through a handful of its maps/worlds prior to writing this review, I did manage to find some rather unique levels: one that equipped my stick figure with a permanent chainsaw and another where x number of enemies had to be killed, except only deaths caused by way of sending them smashing into props were counted. Or how about having to kick the aptly named ‘ball of death’ around to rack up kills? So much fun.

Survival should need no further introduction, but just in case, here’s a brief summary: rack up x number of kills in each tier to unlock the next, after which you’re able to pick any of them as your starting point. Higher tiers are more difficult, but also bring about a larger score multiplier. Simple, yet quite addictive. And then there’s the gauntlet, in which one death forces you to restart from scratch. Health doesn’t reset between levels either, and it’s up to you to find the optimal route across the board, deciding whether to risk annihilation for rewards to potentially help you push further. Definitely a welcome change of pace after climbing the tower for hours on end, or failing all attempts at grabbing that one additional skill point. 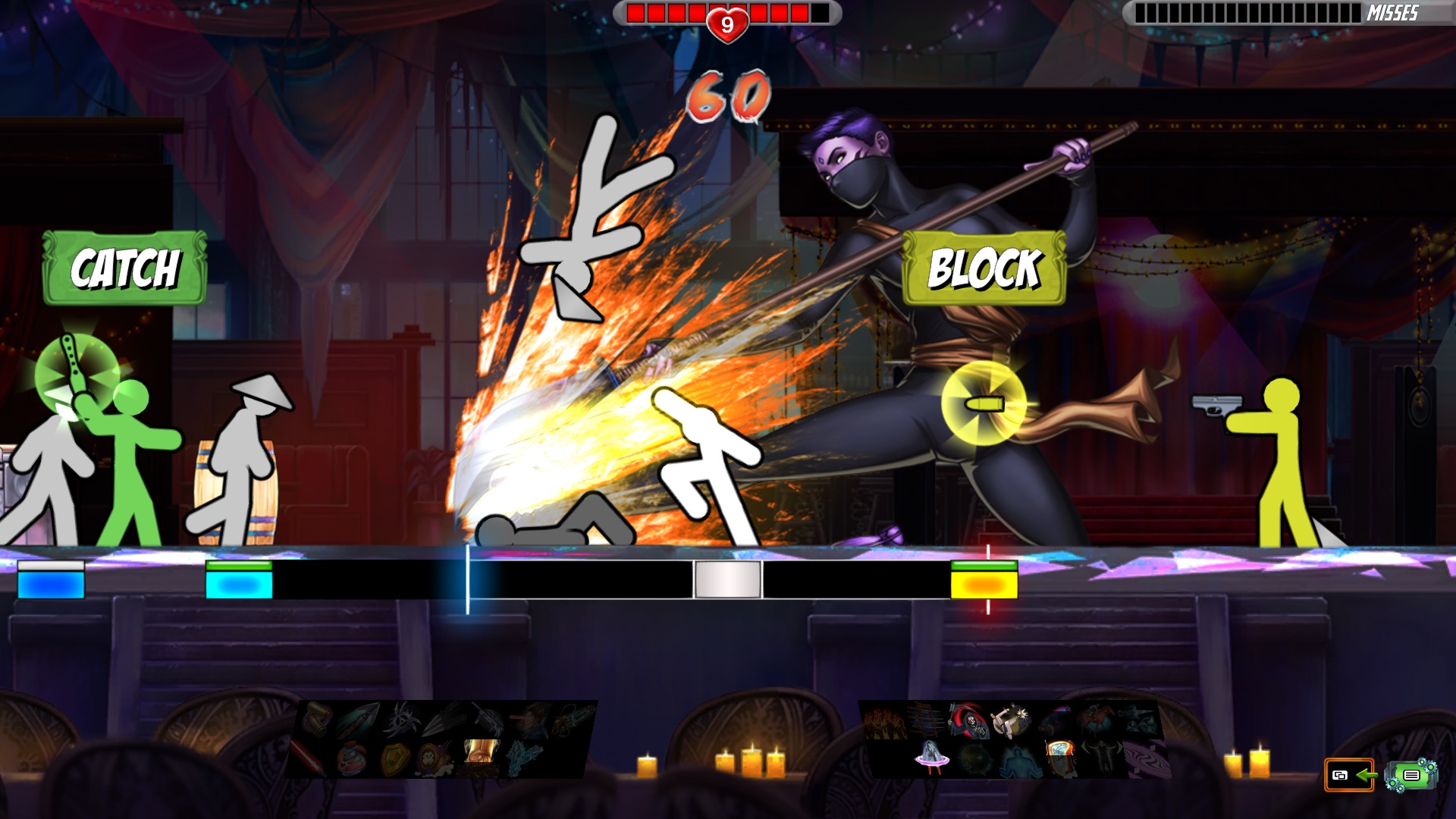 In case all this sounds a tad overwhelming, well, here’s the thing: successfully landing a hit in any level/mode triggers a very brief window during which time is slowed down (much like in The Legend of Zelda: The Wind Waker), and you better believe that this helps. Especially as the pace quickens, enemies making a mad dash from both sides at once, projectiles flying left and right, and you’re down to a sliver of health.

Another helpful tidbit that I discovered while playing is that, unless there’s an enemy on the screen – whether in range or not – attacking in that direction actually doesn’t result in a ‘miss’. Quite beneficial for those looking to get five stars in every single level, since five missed attacks will bring you down to a meager four stars upon completion. Not that these unlock anything, far as I can tell, but hey – a five-star rating looks better on your resumé than four, ya know? 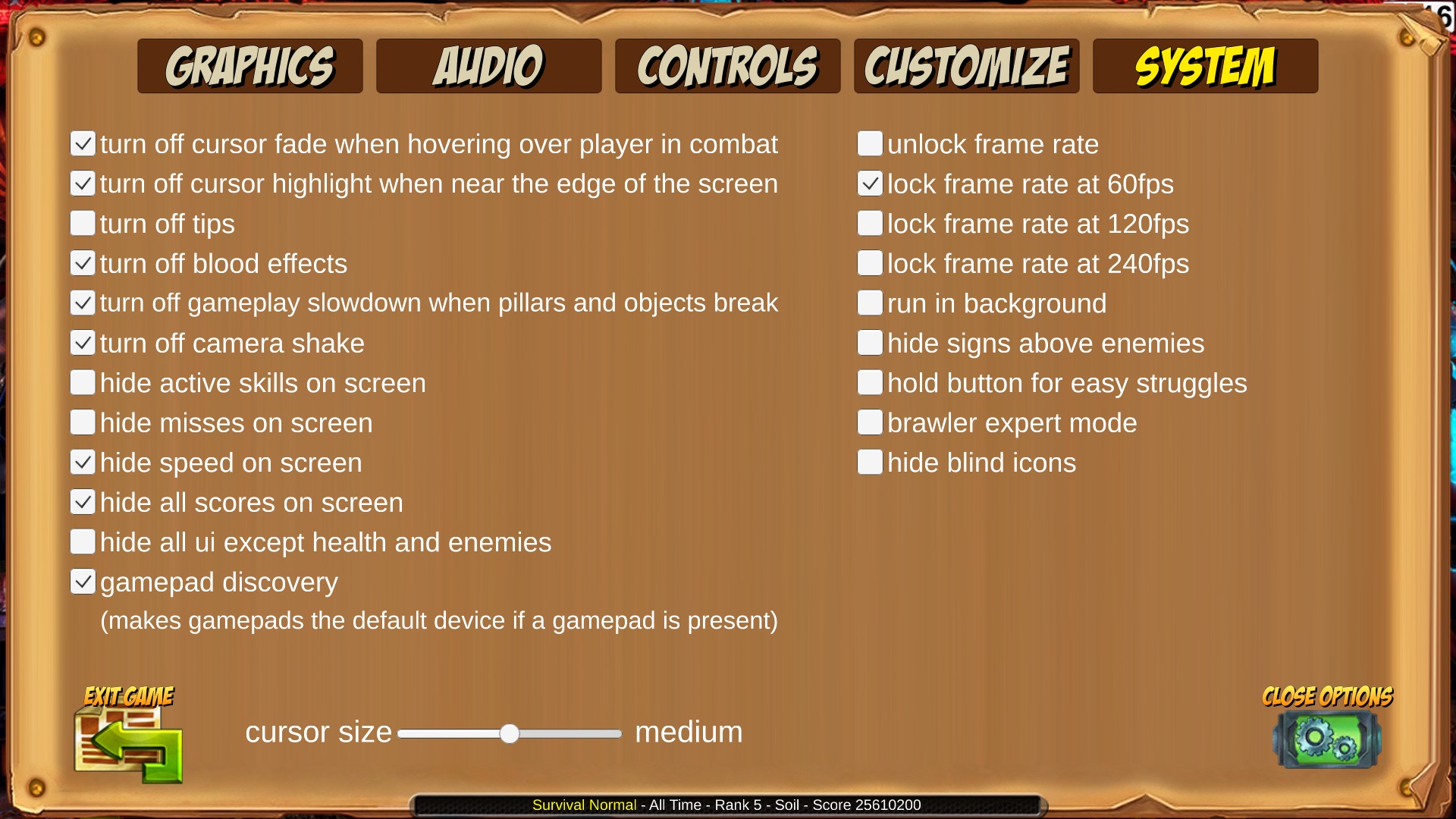 Last but not least, and of quite the importance: like any good non-console title these days, One Finger Death Punch 2 is extremely customizable, frame-rate lockable at 60, 120 or even 240 FPS, resolution crankable all the way up to 4K and of course… pretty much any and all visual clutter can be disabled. Just so you can’t blame visual interference when the game kicks your you-know-what. Camera shake and blood splatter can be quite distracting after all, when you’re trying to avoid getting demolished by way of rapidly timed button presses, so my thanks to Silver Dollar Games for including such options.

All in all… I absolutely adore what they’ve done with this sequel, One Finger Death Punch 2 improving on its precursor in just about every which way. There’s a ton of content to smash through, a tower to climb (complete with leaderboards), and even something for those who love/hate cats. With a control scheme that’s incredibly easy to learn – two buttons! – I’d wager this title can be enjoyed by just about everyone, no matter their skill level. Wax on, wax off?

One Finger Death Punch 2 is available from Steam and Humble, carrying a $7.99 price tag.