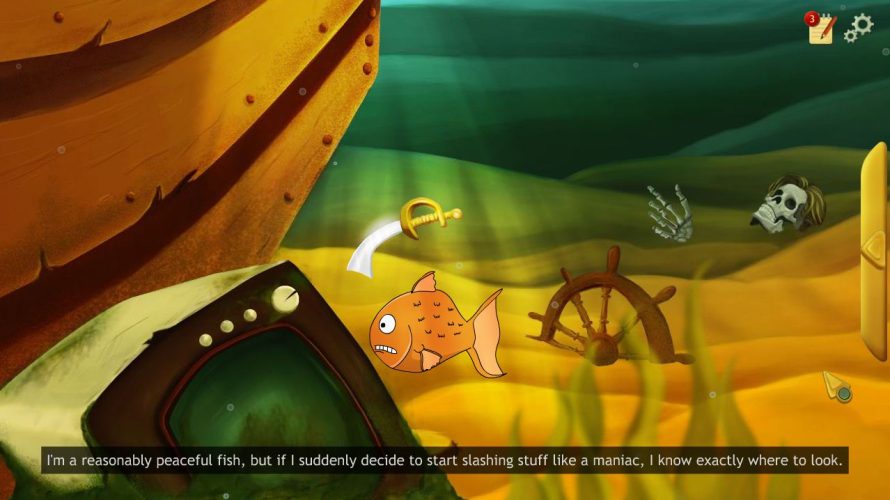 Humans like to complain, often about the tiniest things. It’s who we are. We think our lives are so difficult and full of challenges. Yet, compared to the protagonist in Dudefish: Episode 1, we’ve got it good!

It’s a tale as old as time, about a guy who suddenly wakes up and finds that he’s become a fish! Well okay, so maybe it’s not exactly a story told frequently throughout the ages, but it is an interesting one nonetheless. In this first episode from developer Perfectly Paranormal (I see what you did there), your goal is to figure out why you’ve suddenly grown fins and of course, who is behind such a devious act. Oh and to make matters worse, you’re a goldfish, bad memory and all. Yay.

Discover a town filled with sea creatures in the same situation while trying to uncover the mystery of a dead founder called Squidsteen.

As you swim along, picking up random objects which may or may not prove beneficial to the task at hand, you’ll learn more than a few obscure ‘facts’ about… well, being a fish; complete with cheesy jokes. In spite of your bad memory (remember, goldfish), keeping track of what’s next on the agenda is actually a simple affair, courtesy of an in-game notepad (bet ya didn’t know fish used those). But figuring out how to become your old self again, now that’s another matter entirely.

With a lot of fishy puns, item-based puzzles, fully voiced dialogue and lovely hand-drawn backgrounds, Dudefish just might be a splashing good time for point ‘n’ click fans. Did I mention it’s free? Only the first episode is currently available, but with a splash and a splish (and Greenlight support), the two remaining episodes might also see the light of day. No human should be trapped in the body of a fish ya know, so would ya kindly go play the game and/or cast a vote?