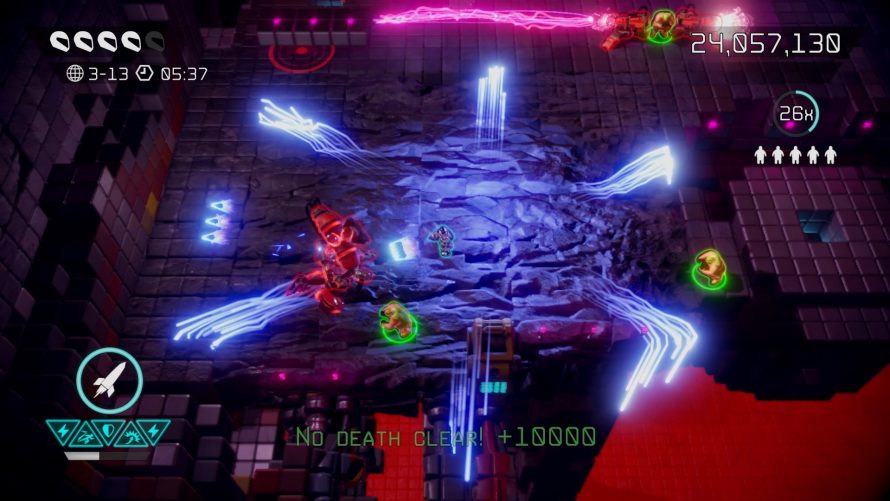 Relying too heavily on machines is a bad thing, to the point where… well, Skynet is a prime example, computers becoming sentient, deciding to eradicate all humans and other nasty things. In fact, something not all that different happened in Nex Machina, mankind suddenly finding itself at the mercy of too-smart-for-their-own-good robots, and you better believe they aren’t taking prisoners. So what’s a lone human to do? Why, grab the nearest gun and get ready to kick you-know-what and take names of course, in this stylish twin-stick shooter!

Having played many an odd genre entry in my time, from score-chasers like Geometry Wars to the more complex RPG-ish Inferno+, I’m certainly no stranger to the genre, and definitely a fan of it. As such, I went into Nex Machina expecting quite a bit, and what I found did not disappoint. Seconds after starting arcade mode – aka. campaign – I found myself blasting away at the relentless onslaught of ever-approaching robots, voxels flying everywhere as one by one they fell to the might of my weapon. A weapon which, for all intents and purposes, seemed a bit lackluster… until I got my first upgrade that is.

Given the number of enemies that wanted nothing more than to take one of my five lives, I needed all the help I could get! So the acquisition of an upgrade that spread my weapon fire in an arc gave me an undeniable advantage. I would later come to realize that this was but one of many tools available, each dropped seemingly at random from fallen foes. But for now, I was content with the boost this one provided, enabling me to blaze through one level after another, quite literally flying between them (and looking pretty bad-ass while doing so, I might add).

Oh, and we mustn’t forget about the other humans. The poor souls who have somehow managed to stay alive up to this point, in spite of being pretty much surrounded by robots immediately at the start of a level. Quite the oddity, but eh, video game, ya know? They’re not just there to make some kind of ‘this is what you’re fighting for’ statement, or some such, either. No, making sure you save all these in every single level is pretty darn important… if you’re going for a high score (because, leaderboards!). Otherwise, far as I can tell, no real benefit. Quite the opposite in fact, seeing how reaching them can be quite a gamble in later levels / on higher difficulties, demanding rapid and precise movement. 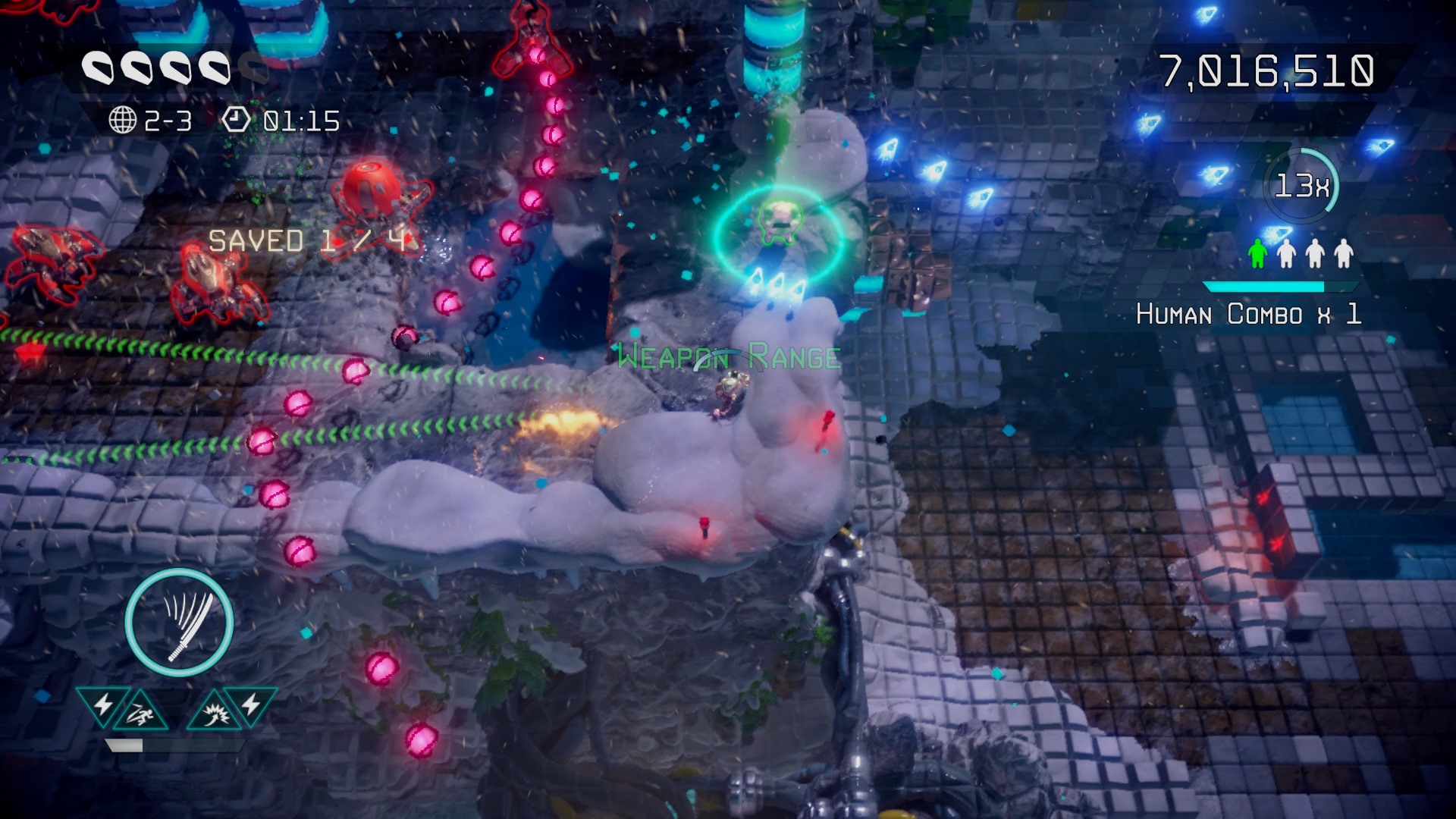 Just like ‘multiplier up’, hearing ‘all humans saved’ from the announcer never gets old though, and I’d wager this will motivate some to attempt it. Me, I was more often than not content simply staying alive myself! That and, in some cases, the last enemy in a level would fall before I had a chance to complete the rescue operation, sending me flying towards the next before said robot was barely done blowing up. Poor humans. If only they had the means by which to defend themselves like I do. If only.

Although I suspect Nex Machina would play out much differently if that was the case, and probably not for the better, friendly fire and all that. Except I don’t think that last bit is actually a thing in this world, for some reason, as friendlies – indicated by a clear green glow – never took damage from my attacks. Nearby robots, sure, but never the green guys. Not that I mind of course. I did make my job a lot easier. Just something that struck me as slightly off.

Speaking of which, while I was doing fine with that initial weapon upgrade during the first few levels, it wasn’t long until more advanced machinery started jumping into the fray, at which point… well, I needed more. And more I most certainly got, in the form of an alternate attack: an absolutely havoc-wreaking laser beam! So what if it required time to recharge between use? This thing annihilated bigger robots, not to mention those pesky turrets with lasers of their own. Now I was starting to feel powerful. Now the odds truly seemed in my favor. Just in time for the first of six rather tricky boss battles (surprise!).

At this point, in spite of packing some serious heat – spread shot, triple dash, laser beam, and so on – I was glad to be playing on ‘rookie’ difficulty, as this, among other things, afforded me unlimited continues. Not unlimited lives, mind you, as I would still lose every last pick-up upon running out of these, on top of having my score reset. Actually, that’s not entirely accurate. My pick-ups weren’t permanently lost, temporarily available for re-acquisition at the location of my untimely demise. Good thing too, because could you imagine reaching the fourth of fifth world, only to lose everything? Have fun trying to survive that! Would be pretty much impossible to progress past that initial continue on higher difficulties if that was the case. 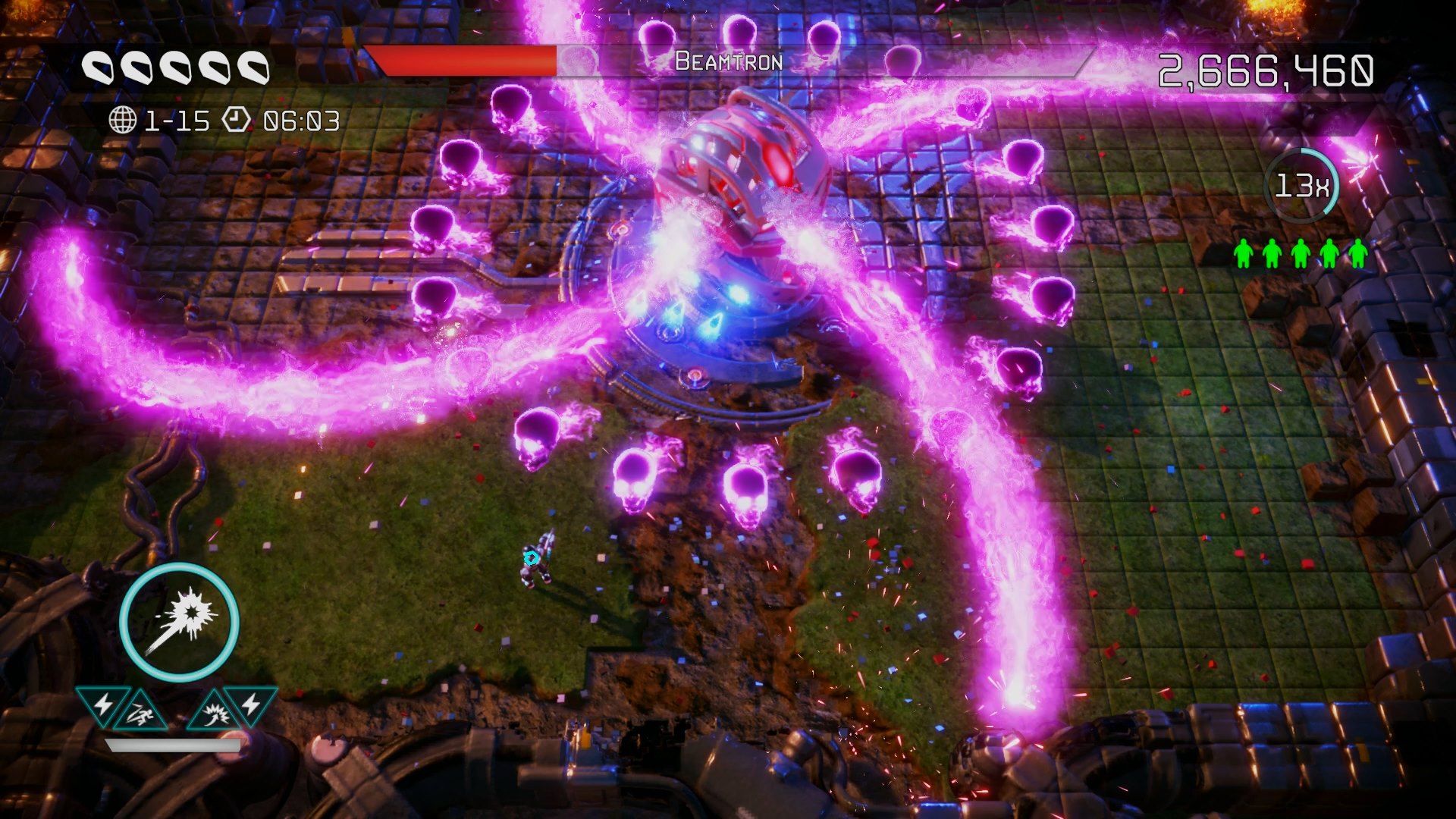 But back to the topic at hand: boss battles! Even the first of these mechanical behemoths took me a while to beat, and it only got more challenging from that point onwards, multiple phases and all. Come to think of it, some, if not all, of these… kinda turned Nex Machina into a blend of bullet hell and twin-stick shooter, and what a blend it was! Skulls, bullets, laser beams, ever-expanding laser circles and so many other things to dodge, all while blasting away at the boss with both primary and secondary (laser in my case, as often as humanly possible). What a rush.

Of course, the ability to dash – and triple dash, with that upgrade in place – did make these encounters significantly easier, once I’d figured out the various patterns of each. But then, upon taking enough damage, the battle would change drastically as a new phase began. No sweat, just had to adapt my tactics and try even harder, because I knew eventually he/she/it would fall. Which they did. Every last one. None left alive. I beat them! I beat them all! Every single last pesky robot dead befo – ahem.

Anyway, needless to say, I may have gotten a tad bit carried away while playing Nex Machina, but can you really blame me? It’s been forever since a video game has provided such an adrenaline rush, such intense action, such… pure… fun! No complex upgrade trees, no unlockable equipment, no cut-scenes. Just me, my weapons, an uncanny ability to dash around the battlefield, and oh so many robots to demolish. It was undeniably glorious.

Now, I am guilty of not having saved every last human by the time the credits rolled, but I did try. I did. Honestly. Besides, not all were hidden in plain sight either, the job of finding these so-called ‘secret humans’ requiring searching in and/or behind destructible terrain. I had a hard enough time staying alive, gunning down robots and all, to focus on smashing mountains, boxes and such, too. And then there’s the whole ‘killing the last enemy automatically triggers a level transition’ thing.

That last bit is easy enough to understand. It makes perfect sense. Exactly what unlocks secret levels, on the other hand – no clue. Even upon revisiting my footage for this review, I still can’t tell what I did to access these. Seems entirely random, best I can tell, but surely that’s not the case? Darn shame too, as I’d like to have visited more of them, even if it did increase the number of levels I would have to survive to reach that fabled final encounter. The fight that would end this war once and for all (…or would it?).

On a related note… some games are often described with how the journey is more important than the destination, and that definitely applies to Nex Machina. Not that the last world, level, or even boss battle, were bad. Not at all. But the experience leading up to that point just felt much more, I don’t know, worthwhile? So much that I even went into the ‘online arena’ mode after my initial playthrough of ‘arcade’ (which, again, is a fancy word for ‘campaign’). 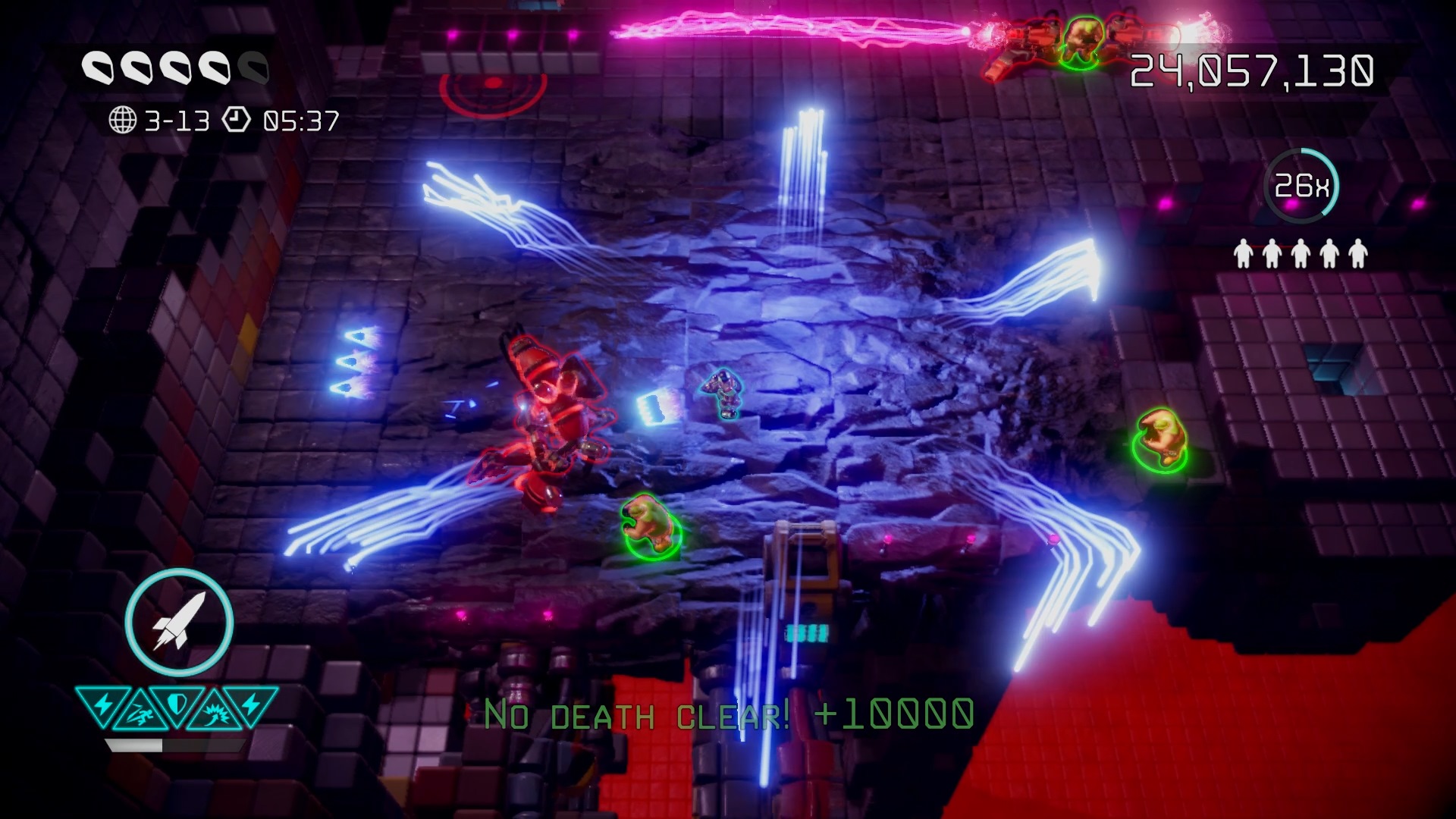 Here, it’s ALL about points. Points, points and more points. Oh, and unlockable special versions of each world. Arcade too slow for your tastes? Unlock Forest Redline, Ice Redline or Flare Path, to play faster versions of what I believe to be each of the first three worlds. Just beware that everything moves faster here, from enemies to bullets, lasers, and even your character. It can get pretty chaotic until familiarity with each area kicks in because far as I can tell, these remain unchanged from their arcade counterparts. Which is definitely a good thing, seeing how online arena restricts you to three lives and… zero continues! Better make every shot count.

In that same mode, there’s even a version of Crystal Mountain in which your score ‘only accumulates while under human combo bonus’. Probably explains why each of the three medals have such low score requirements. A fun little twist for sure, even if most will likely be playing the ‘everything is faster’ variants before even considering something like this one.

One thing all modes have in common though is that they all manage to show just how incredibly stylish Nex Machina is, voxels filling the screen as robots explode all around the player. Unless you, like me, have to crank down said detail level that is, to get the game running at 60 FPS. A darn shame, but that’s what I get for not having a beefier rig, I guess? Messing around with the various filters – and loving the retro one – only enhanced the experience, however, and I was a bit sad to find there were only so many.

That little voxel related performance issue is also the only negative thing I have to say about the game, surprisingly enough. The fact that I kept playing well beyond my initial playthrough emphasizes just how much fun I was having after all, unwilling to put my controller down and start writing this review. So a glowing Nex Machina recommendation from me, and fingers crossed for more awesome games from Housemarque in the future.

Nex Machina is available on Steam (reviewed) and PlayStation 4, carrying a $19.99 price tag.