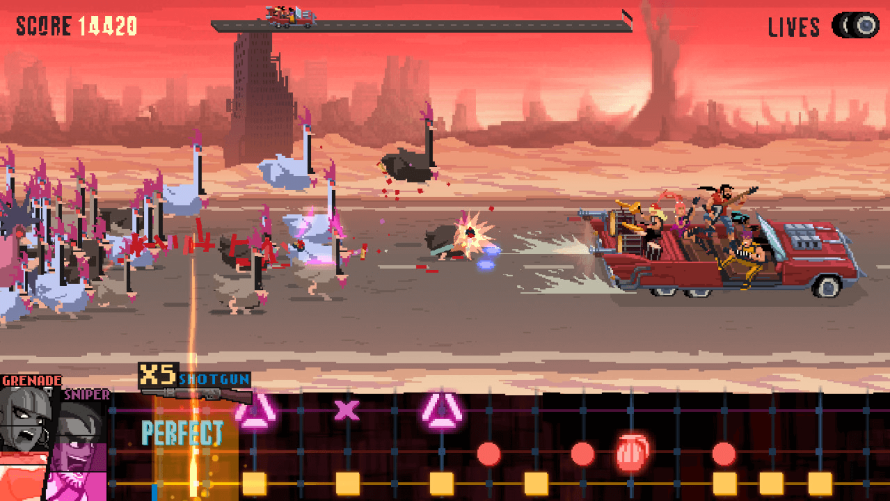 There are those out there who would claim that heavy metal is dangerous. They obviously don’t know what they’re talking about, even if a case could be made for their claim in Double Kick Heroes. In this game, you are literally utilizing insane drum solos and crazy guitar riffs to lay waste to everything from zombies to… some seriously disturbing creations. Rock and roll!

After taking the demo for a spin many moons ago I wanted more. More tracks, more enemies, more everything. In spite of being in Early Access, it seems that’s now a possibility as Double Kick Heroes -- in its current state -- brings both an ‘arcade mode’, ‘story mode’, and even a level editor to the table. Plenty of stuff to mess around with as you do your best to play the most intense tunes the world has seen, and from within the limited space of a Gundillac no less.

Meet the crazy band powered by METAL : Lincoln, Snake, Derek, Randie and James. They love METAL and can’t spend a day without it. Each one of them is a unique, cunning, METAL player.

Oh, and over the course of the game, you get to pimp said Gundillac, potentially making the vehicle look even more fearsome than the weaponry attached to it! But unless you figure out a way to tame the metal beast, the trip through this desolate wasteland will be a short one. So get ready to mash like you’ve never mashed before, because “30 tremendously f****king awesome quality METAL songs by a legendary video game AND METAL composer” awaits (unless you decide to import/create your own tracks, of course).