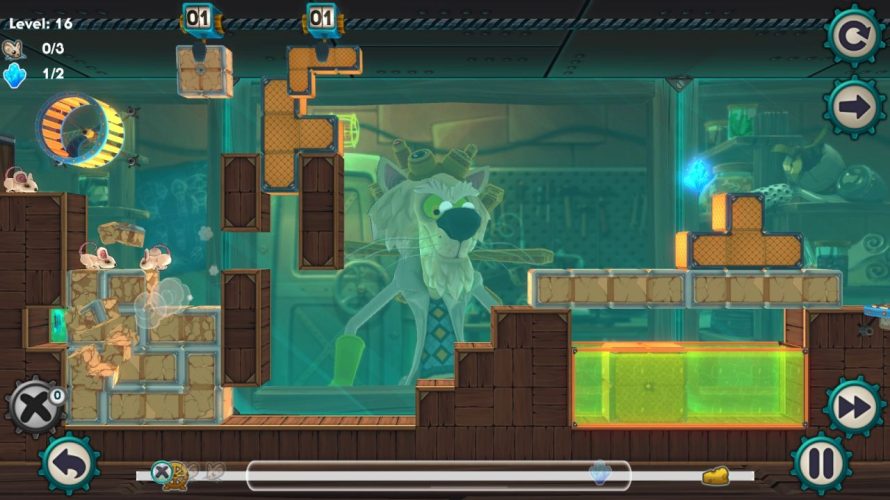 Obviously, unleashing three blind mice lose on an obstacle course isn’t going to get many results, as they’ll have a rather difficult time navigating it. But what if an invisible force (as in you, the player) had the power to create a safe and easily traversable path? With tetrominoes and a little puzzle solving, there is hope (and cheese) at the end of the tunnel for these poor rodents.

MouseCraft is the classic tale of a mad cat scientist, hard at work on creating a mysterious mice-powered machine. What do you mean “that’s not a classic tale”? Hmm… Well, maybe it isn’t right now, but someday it will be. Mark my words, someday it will be! For now, I guess we’ll have to settle for “original and amusingly odd”. Not that the story is more than background information anyway, from what I can tell. That said if helping a crazy cat scientist isn’t enough motivation for you to solve some mouse-driven puzzles, what is, really? I’m also fairly certain this cat’s plotting global domination, and that this machine is simply the first part of a cunning plan.

Seeing how you’re still here, that can only mean one of two things: either you’re waiting for a link to the game, or you want to know more about it. I’m gonna assume it’s the latter and get to detailing the Lemmings inspired tetromino driven mouse puzzle mechanics you’ll encounter. Let’s face it: without the player to play Tetris with them, these mice are helpless on par with the protagonists in DMA Design’s 1991 classic. Oh, those poor mice. 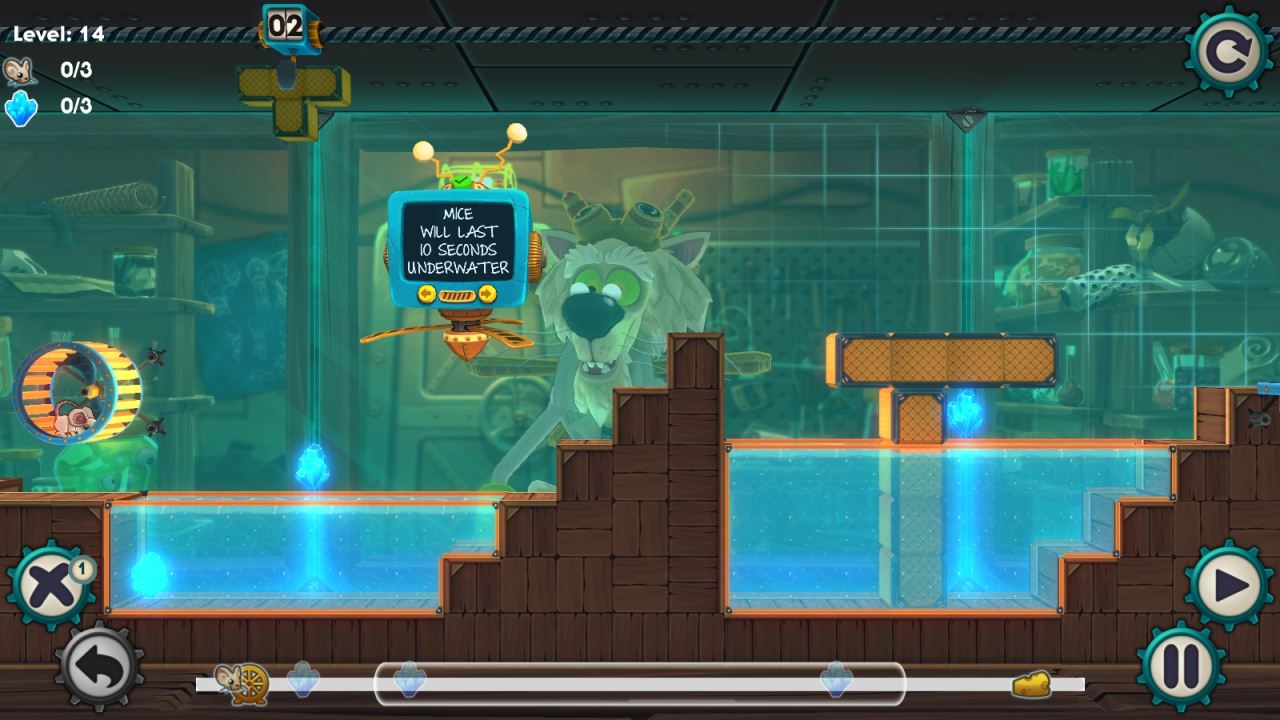 While you’re never directly in control of the trio, getting them from the beginning of each level to the delicious cheese isn’t as daunting a task as one might think. It would be, if dropping those fancy Tetris blocks to create a path was all you could do, but fortunately a few ‘rules’ apply as to how the mice move and how they react to the environment: they’ll turn around upon hitting a wall, unless it’s just a single block high, as those can be jumped over. This limited set of moves helps when trying to determine which shapes to drop where and when to ensure safe passage; maybe grab some anima shards along the way?

According to the tooltips, these act as a form of in-game currency, although no matter how hard I looked, I found nothing that even resembled a shop. Probably just a case of alpha being alpha, and I’m sure it’ll be added as development progresses. Until then, anima shards are merely food for completionists and let me tell ya, some of them can be quite tricky to get; but hey, what’s a puzzle game without challenge? In spite of its cute and cheerful appearance, once you’ve cleared the first ten or so levels, the truly mind-boggling stages appear – remember, looks can be deceiving.

If placing tetrominoes to guide mice around a 2D environment sounds a little too peaceful, well, just wait until you get a hold of some destruction tokens! These, as the name implies, allows you to destroy bricks, which is something you’ll be doing often. Not just to beat a level, but more often than not, anima shards tend to be hidden behind a block or two (kaboom!). And how about some jelly bricks to ensure a safe landing, no matter how high the fall? Oh, that’s right, I forgot to mention that they won’t survive a fall higher than three units. Unless, you know, jelly. 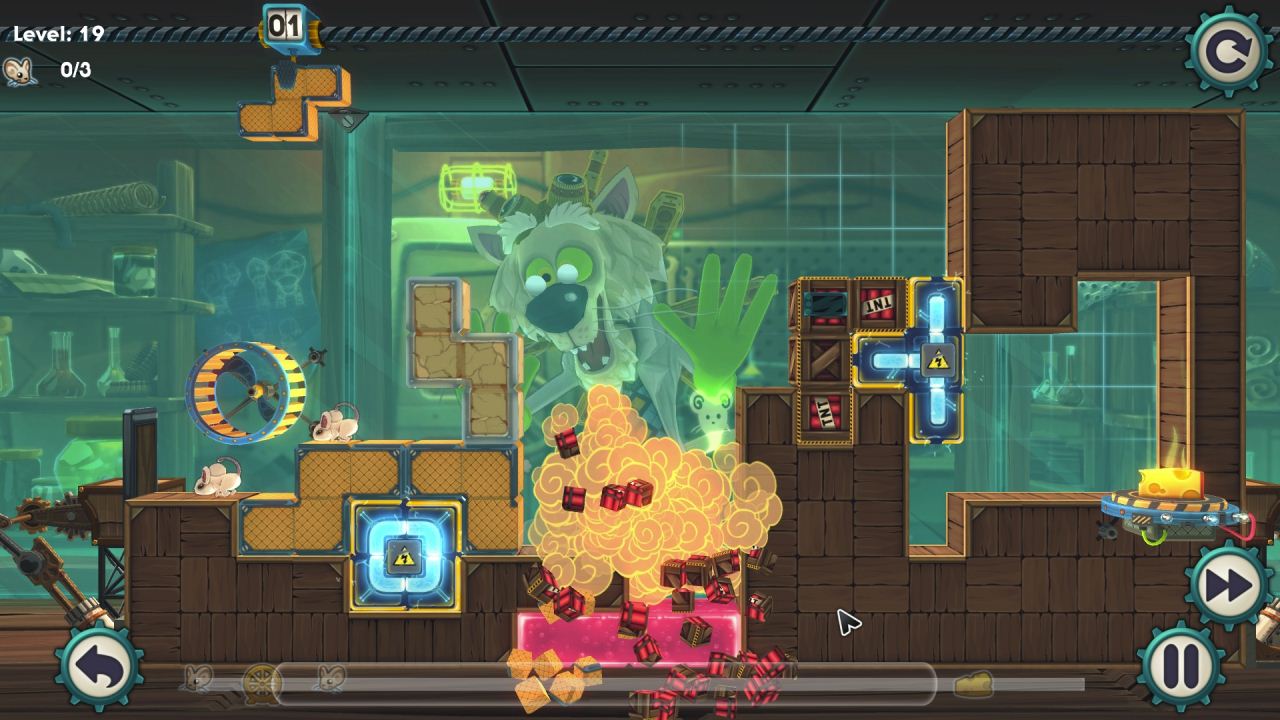 Even with the aid of special bricks, you’re still gonna have to think fast or… make friends with the ‘restart level’ button. Depending on how much you messed up, the ‘undo’ button might be a more viable option, though. This feature certainly makes it all much more accessible, since instead of starting from scratch – which can be quite time-consuming in the later levels – you can take back as many moves as you need, to try a different approach. Some might say it also removes any challenge, but remember: just like the rewind feature in racing games, no one is forcing you to use this one either.

Once you’ve gotten the hang of it all and/or puzzle mode has been cleared, arcade awaits, with a much quicker overall pace. Tetrominoes arrive like transported on a conveyor belt and your supply is infinite, but the game decides the next shape you get access to. And remember how you had time to plan and prepare, before setting the mouse free from their wheel? No such thing in arcade. On top of all that, destruction tokens are unlimited, except… once used, it won’t be available until a certain amount of time has passed (that’s right, you only get one at a time here). If you found puzzle mode too easy, arcade should provide the challenge you so desperately seek. 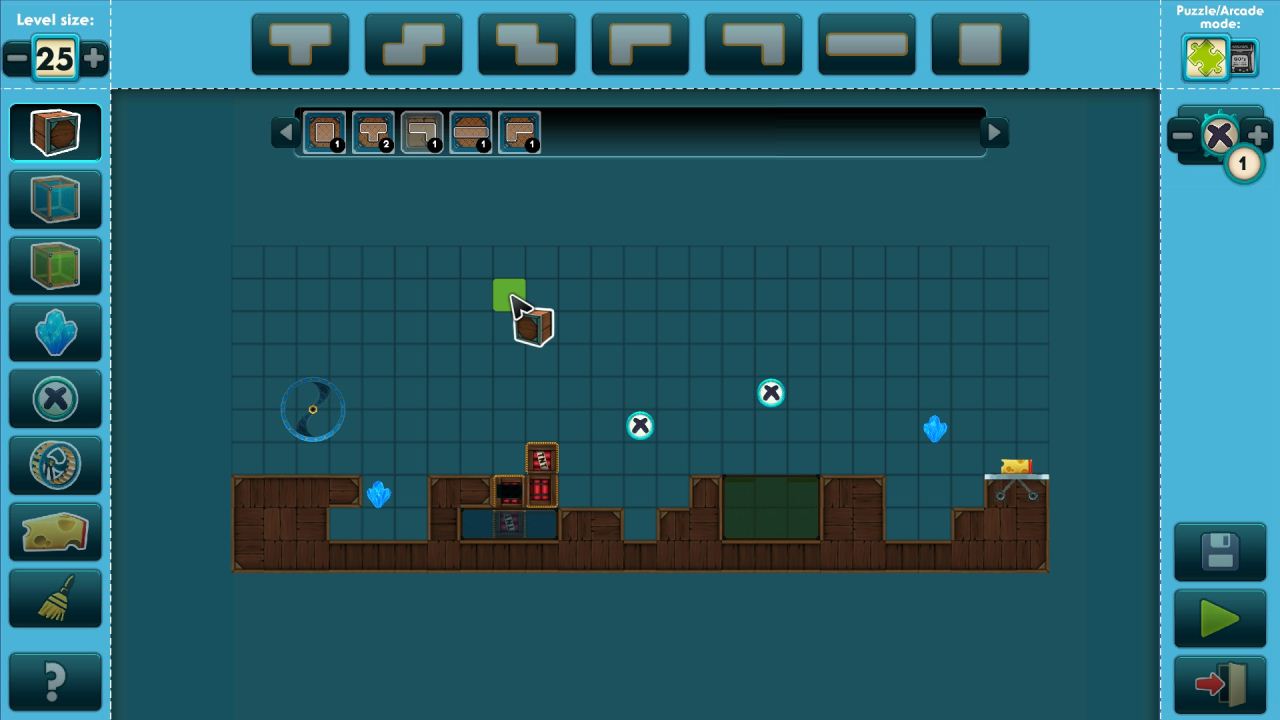 There’s a lot more to MouseCraft than what has been written here, including an incredibly easy to use level editor, but I’m sure your interest has been piqued by now, and that you’re eager to play the game. How? Well, even though it’s currently in alpha, the game is available to anyone willing to part with whatever they feel it’s worth (aka. PWYW). This special offer is only available until August 31, 2013, though. Full version? October this year, if all goes according to plan; and don’t forget to greenlight it -- remember, your vote matters!