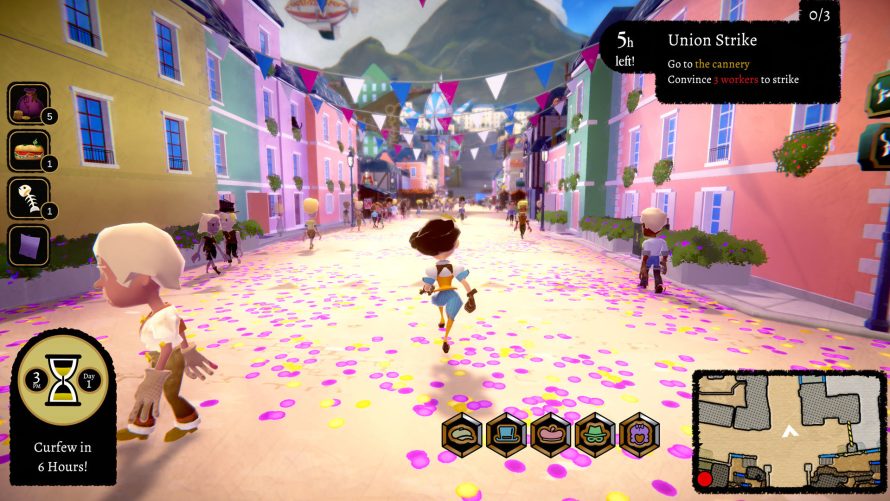 It’s been a while since my last writings on the ‘revolution simulator’ (developer’s words) that is Mesmer. In fact, its grand reveal was covered way back in 2018. While the wait has undeniably been long, the time has finally come for Teri De Belle to unite the people and… storm the castle! Because that’s how revolutions work, right?

Anyway, Mesmer – which, as it so happens, is also the name of the nation in which the game takes place – is in trouble. Used to be nice and all, but nowadays, it’s a pretty dire place to call home, rationing and curfews being a thing. Oh, mind-bending plants. Also a thing. Ugh. Clearly, something needs to be done, someone needs to take charge, overthrow the king – all that good stuff.

As for how you go about doing that, after stepping into the shoes of one Teri De Belle, is (almost) entirely up to you: will you garner favor with the locals by aiding with daily tasks and through social interactions or turn to the dark side where blackmail and violent threats are perfectly viable methods? Whichever path you favor, always keep in mind that actions and choices both directly impact the end result (or which ending you get, I should say).

Will you be the one to turn the tide, and lead the people of Mesmer towards a better future?

No matter how you play, the whole curfew ordeal remains a constant threat, as staying indoors after nightfall is not an option for this particular revolutionary. There are ways to avoid the guards though, including sticking to the shadows and grappling to rooftops. Hiding in plain sight, basically. Until the time comes to actually storm the castle, after riling up the hearts of the population, at which point… well, you’re just going to be in plain sight. Much like the end. Which will also be in sight, at that point. One way or another.

Mesmer is available on Steam and GOG.com, carrying a $14.99 price tag.