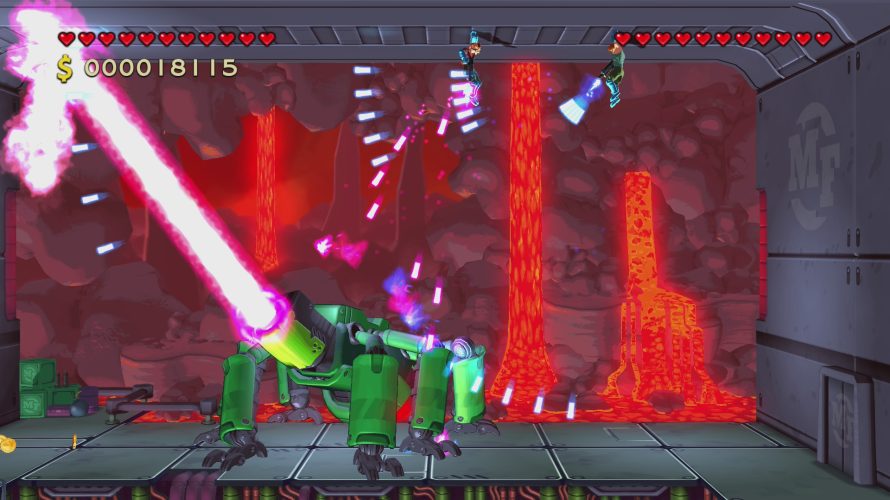 Those hoping for a third Gunman Clive title might be slightly disappointed by Mechstermination Force. Until they’ve crawled all over that first boss that is, experiencing the thrill of an encounter that’s as much a puzzle as it is a battle. Anyone else getting a strong Shadow of the Colossus vibe? Groovy stuff.

Although if Bertil Hörberg’s prior games – ie. Gunman Clive 1 and 2 – are any indication, saving the world from those giant MegaMechs won’t be a walk in the park, so much as a rather challenging experience. I’m all for that though, and even more so because ‘it’s dangerous to go alone’ (read: Mechstermination Force has local co-op).

Use the Magnet Gloves to climb on top of robots the size of Skyscrapers, double jump over pools of lava with the Boost Boots, and use your trusty baseball bat to smash the MegaMechs energy cores.

As depicted by the trailer, this one also won’t be a simple run ‘n gun affair either, the only way to take down these behemoths being by… doing some physical infiltration. By which I mean that you have to get all over them to reach their weak spots – even wander inside at times! Creepy? Weird? Nah. We’re dealing with robots here, so it’s fine. Just another day on the job. A job which, as it turns out, involves fighting to save mankind. Best job ever.

Mechstermination Force is coming to Switch this spring.