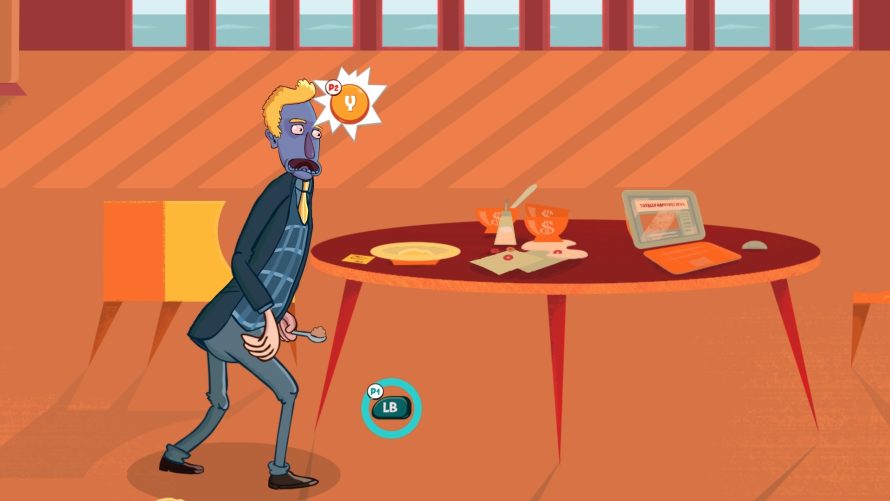 Blink! Breathe in! Breathe out! Adjust that spine and move your arms! NOW damn it! Ahem. Sorry. Samuel, Manual Samuel‘s protagonist, might have driven me ever so slightly mad with his behavior, being a genuine douche and all. In fact, if not for the extremely comical tone of the game, I likely wouldn’t have bothered even trying to give him a much-needed makeover. Oh, and controlling Samuel… is like playing an odd mix of QWOP and Octodad.

That said, in spite of a handful of annoyances, I did enjoy playing through Manual Samuel. Even more so because I brought a friend along for the ride, Samuel’s bodyparts divided evenly between us. Hang on. Alright, I realize how that might have sounded, but stay with me – I promise, it’s not like that at all. See, much like in the aforementioned games, each limb/body part is mapped to a button: everything from blinking and breathing in/out to each arm and leg is manipulated by the press of a specific button, and you better believe it’s not as easy as it sounds. 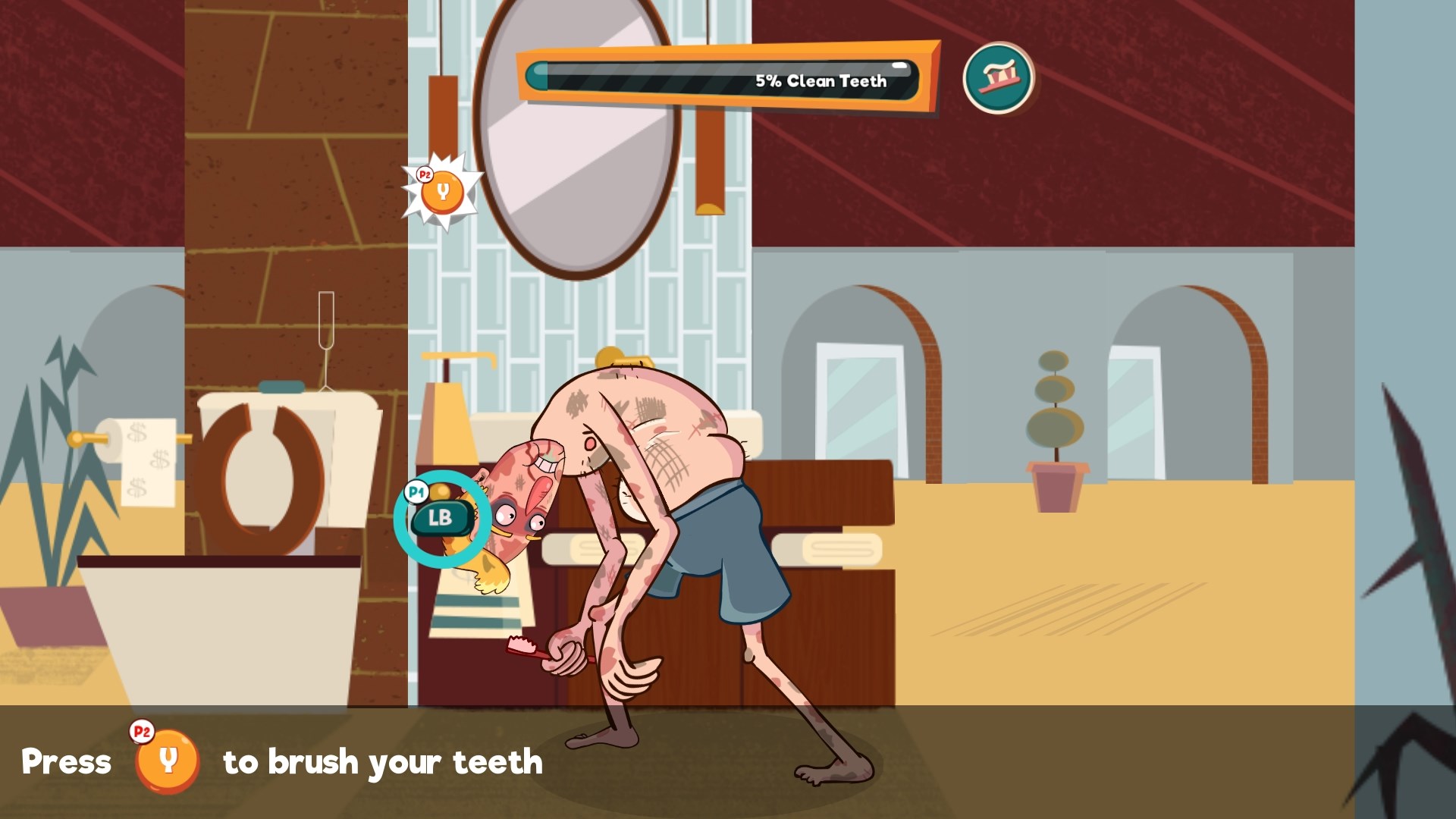 Even the simple act of walking requires you to move each leg in succession, as otherwise, well, Samuel is going to fall flat on his you-know-what, perhaps even breaking his spine in the process. At which point, you’ll have to deal with readjusting that too. By pressing a specific button. Yeah. The whole ordeal only gets more complicated when timed button presses join the fray, an on-screen slider testing the player’s ability to be precise. While moving Samuel and interacting with his surroundings proved comical, even at the worst of times, these semi-QTEs proved more frustrating than fun, courtesy of input lag. Much as I’d like to blame it on my Xbox 360 gamepad, it did also occur when using a mechanical keyboard (Cooler Master QuickFire XT, for reference).

But let’s take it from the top, for oddly enough, Samuel wasn’t always in the sad state depicted by the above screenshot. He was, in fact, pretty much having the time of his life, even if no one really liked him and… well, I did mention how he’s not a very lovable person, right? So much in fact that forgetting his girlfriend’s birthday pretty much lead to his untimely demise. Sorta. After which the game starts properly, its protagonist dead and all. What, it doesn’t make sense? Oh, it does. Believe me, it really does, albeit in a very silly way: not liking the whole being dead bit, Samuel makes a deal with Death: survive for 24 hours while controlling his entire body… manually (and now the name of the game actually makes sense). 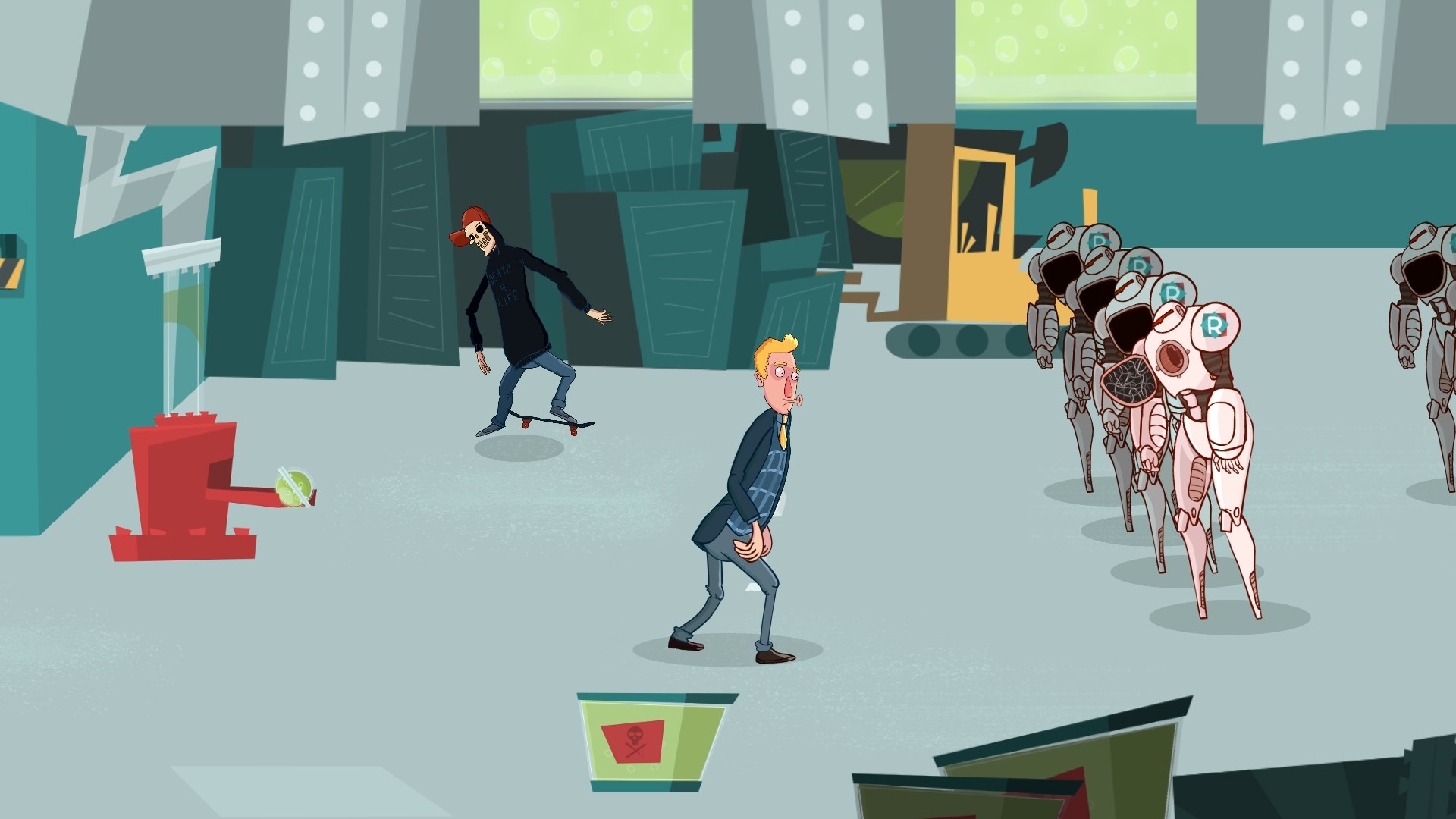 Ah, almost forgot to mention that Death decides to tag along, mocking Samuel at every which opportunity; whenever he’s not busy attempting to perform a kickflip like the hardcore skateboarder he clearly is. Without spoiling too much, I will say this: this version of Death, for all his flaws and cheesy one-liners, is actually not half bad. Both in terms of being helpful and humorous, even if his affection for the word ‘feces’ is a tad stronger than most would have liked. On a related note, Manual Samuel isn’t afraid of delving into crude comedy at times, and while that might be off-putting for some, it thankfully never reached downright tasteless levels of absurdity.

Unfortunately the same can’t be said for the plot, for while lines are delivered quite nicely – especially those of its fourth wall breaking narrator – the story is, quite frankly, all over the place. I do get how it can be challenging to give deep meaning to ‘survive for 24 hours while every basic action is turned into a complex button sequence’, but it would still be nice to have more story elements. Or am I asking for too much, seeing how the game is quite determined to focus almost entirely on being a completely nonsensical journey… and little else? Perhaps.

What a journey, though. What a journey. One that made me appreciate how the human body works in real life a whole lot more than I would otherwise, having experienced the cumbersomeness of controlling Samuel for a day (even if the game was over after only a handful of actual hours). Even basic tasks such as using the toilet was a test of rhythmic button presses, and don’t even get me started on the challenge of more complex things such as… driving. That said, fans of Heavy Rain should feel right at home with the button-holding combinations portrayed here, however, and once I got the hang of it, eh, wasn’t really all that bad. Just a bit of a learning curve is all. 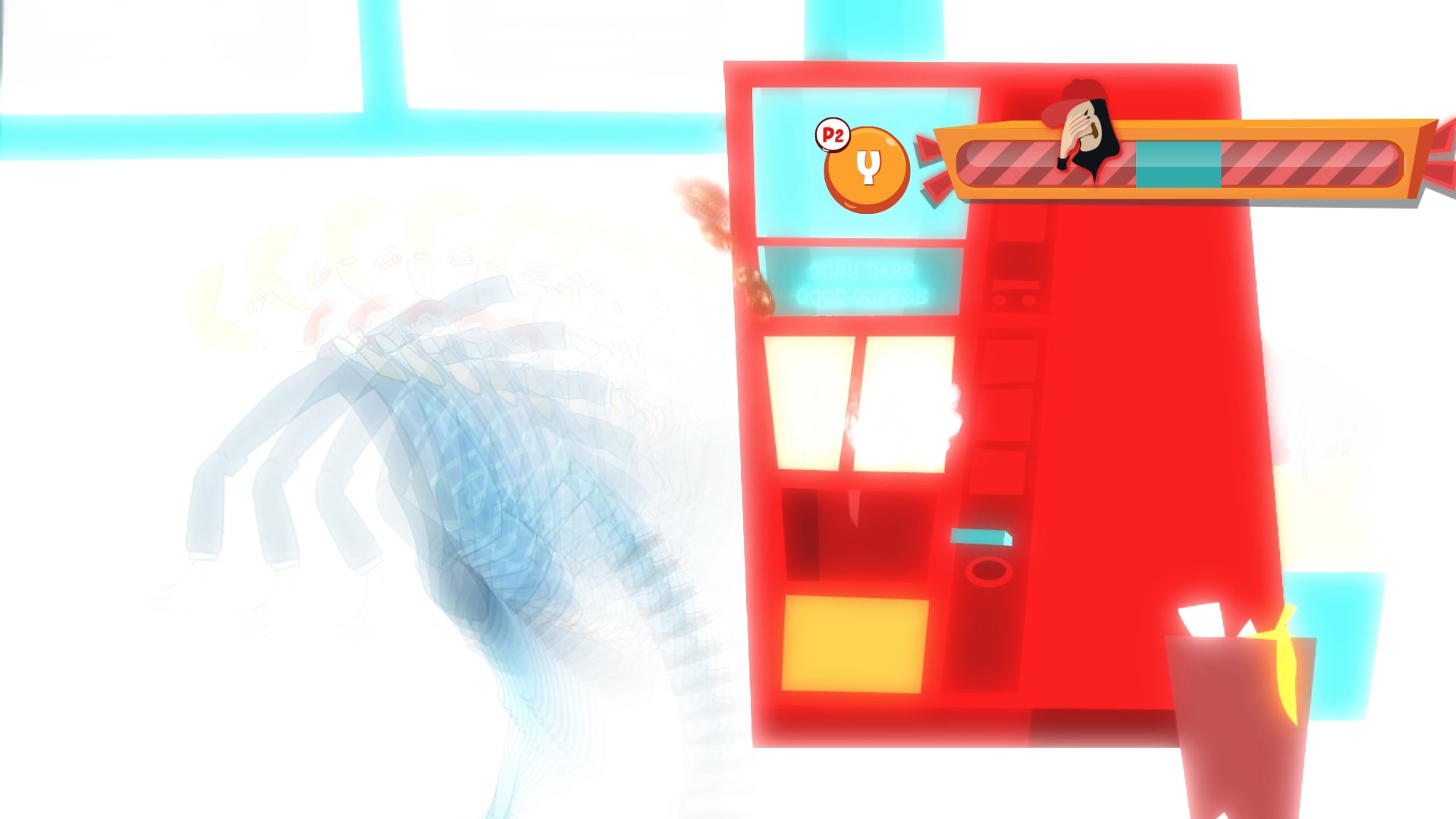 Now, if you’re thinking that keeping Samuel alive for a whole day hardly sounds like an overly daunting task – in spite of having to control his entire body manually – well, here’s the thing: forgetting to breathe, blink, attempting to move the wrong leg, etc., will cause Samuel to collapse, at which point an additional button press will be required to get him back on his feet. Oh, and every so often, at completely random intervals, his spine will snap, forcing you to deal with that before continuing. A terrible inclusion? Hardly. The entire experience does, after all, revolve around the concept of, you know, a Manual Samuel. So while I could have done without certain ‘mini-games’, I am not going to fault the game for doing exactly what it says on the box.

I will, however, be cursing the final areas – and the final itself even more so – until the end of time. Or at least… refer to them in a very negative way. Why? Well, unlike just about every other aspect of the game, your objective wasn’t overly clear, causing a fair amount of frustration as one attempt after another lead to failure. Until I finally picked up on what the game wanted me to do. Whether this was simply a case of me being unable to interpret whatever signals it sent I do not know. But I persevered and eventually emerged triumphant with a sense of satisfaction, having beaten insurmountable odds and made the world a better place (well… some of that anyway). 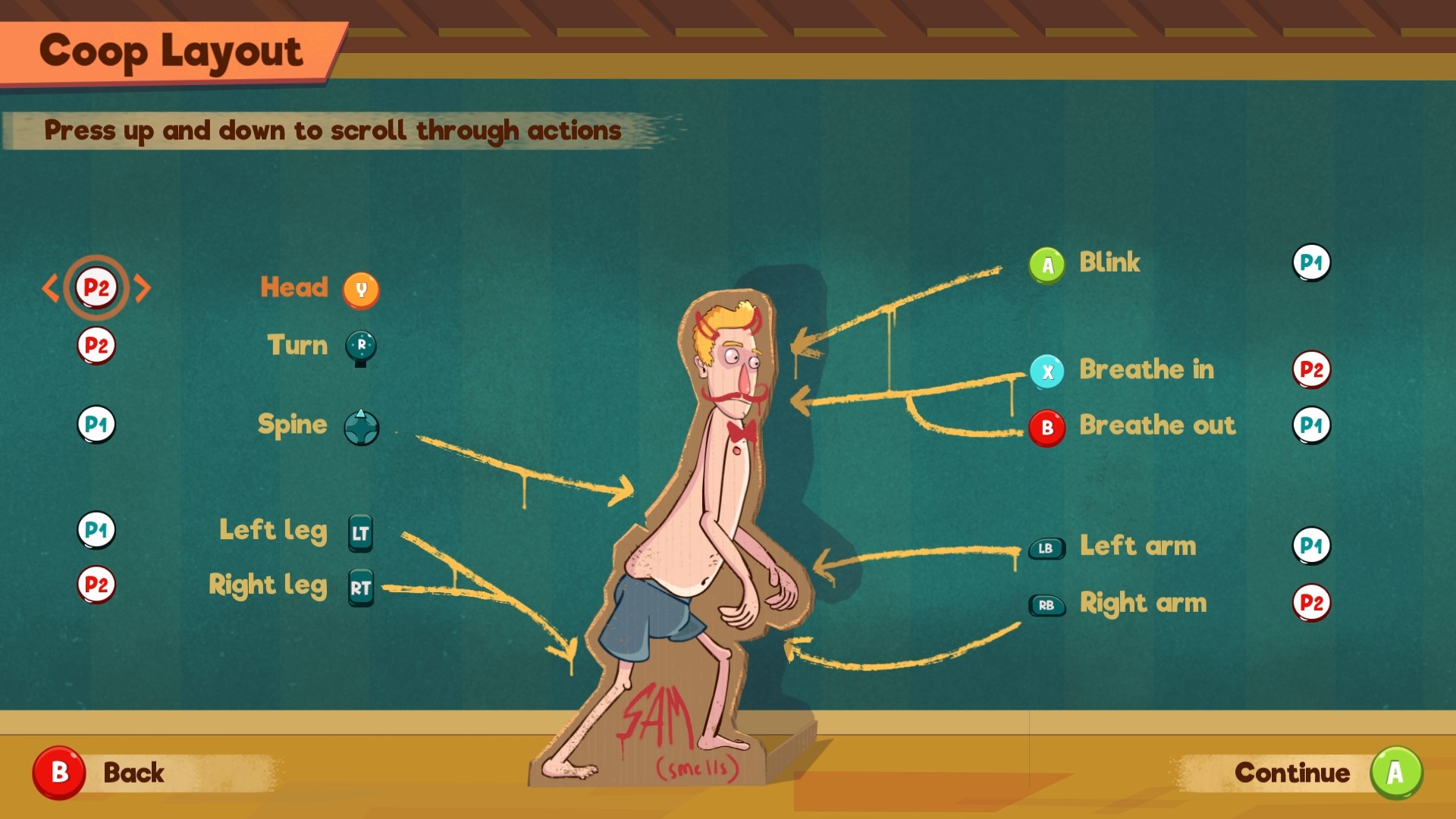 All in all, an undeniably fun game, even if it is by no means perfect. But if you enjoy quirky games and goofy humor, I’d still recommend Manual Samuel. Just be sure to play co-operatively, as having another person in charge of whichever parts you choose did add a significant amount of joy to the experience for me. Come to think of it, I am not sure I’d even have reached the end instead of giving up halfway through, had I played by my lonesome. But I did, flaws and all, and as such, decided to write the review you have now finished reading. So, who’s ready for some… uh, manual action?

Manual Samuel is available on Steam (reviewed), PlayStation 4, and Xbox One, carrying a $9.99 price tag.