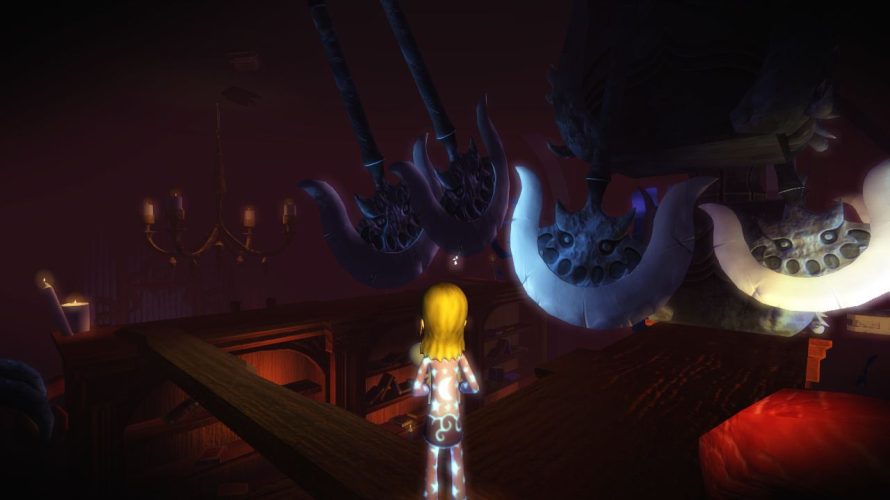 A disembodied voice told me to wake up. I should have known better, yet I chose to open my eyes and found myself in a dark and dangerous world, with that mysterious voice in my head and a camera at my feet.

Created by a team of students under the name Thousand Cranes Studio, Lumen has you playing the part of a little girl who has been plagued by nightmares for a while. Only this time things are different… this time, she’s not going to wake up unless she finds a way out of this place. It may not be scary for grownups, but for a 5-6-year-old girl, to be trapped in a strange land… suffice to say, she’s more than likely terrified! At her age, most would be.

Yet she showed no sign of fear. Not even a whimper, as huge axes swung mere inches from her body, more than ready to cut her in half, making this her final resting place. You see, Lumen is a puzzle platformer and a dangerous one at that. The camera? Forget it. That thing isn’t going to prevent traps from ending your existence or stop the creatures that inhabit the world from catching you. No such luck. Instead, its use is to change parts of the environment, creating platforms and manipulating objects beyond physical reach.

Like so many other nights that she does not recall, a little girl wakes up in her dreams. She finds herself in a world of nightmare and a mysterious voice tells her to get up and to start walking.

While this allows you to progress, creating paths where none existed before, dealing with less inanimate objects is another matter entirely. No amount of flash is going to make those things go away, so when one gives chase, your best bet is to hide under one of the tables with a lantern on it. Still not quite sure how that works, because from my point of view, she was very much in plain sight. But that’s just how it is with video games, I guess; the suspense of disbelief and all that.

Aside from that minor tidbit and a few mishaps in the voice acting, it was a fun 30 or so minute adventure, which culminated with – minor spoiler – a choice. As the credits rolled, I was still wondering if I had made the right call. Maybe I should go back, experience the alternative? Maybe I will. At some point. But until then, the little girl still needs someone to help her through the nightmare that is Lumen. Remember, there’s nothing to fear but fear itself.