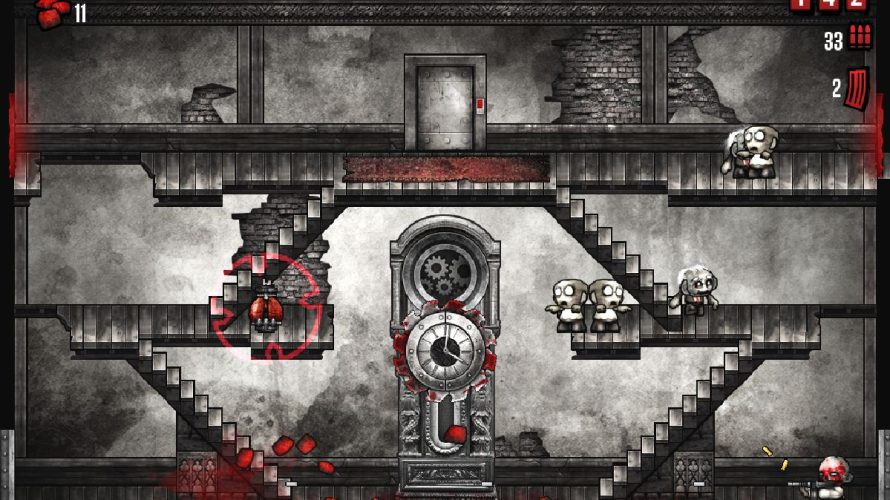 So, how’s your face this fine morning? Oh, that’s right, you have none because, well, zombies ate it, in this undead action romp through a giant mansion. Don’t worry, plenty of masks are available to cover up what’s left of your face, Mr. McGee.

With an entire mansion to search, each room filled with those darn undead (and traps, because why not?), it’s gonna take some serious firepower for Noface McGee to get through it in one piece. Plenty of guns and melee weapons are available though, so you might stand a chance. Should you fail however, I’m sure the zombies will enjoy making a meal of you; at least your death will not have been in vain.

You start each game trapped in a random room that is slowly overcome with Zombies. Each room has three game play types that randomly occur, Standard, Hazard, and Boss Battle.

See? Told ya there’d be traps. Well okay, so maybe hazards aren’t traps per definition, but still – same thing (almost). Standard mode’s your typical survival, with boss battle also being self-explanatory. Ain’t all fun and brains though, as figuring out what the heck happened and who’s behind it all, involves… wait for it… collecting comic book pages. Anything’s possible when the dead have risen from their grave, I guess? Also, those masks I mentioned earlier actually include a shark’s head! Why? Again, why not? Remember, the bloody undead are wandering around, so one can safely assume that logic has gone out the window.

If the Kickstarter demo is any indication, the fun remains intact though. However, since it’s an alpha, the usual ‘not a reflection of the final product’ does apply. So go ahead and take it for a spin; especially if you’re considering becoming a backer. At the time of writing, $588 of $23000 has been pledged, so there are still ways to go (and 23 days left) for Zombie Mode. 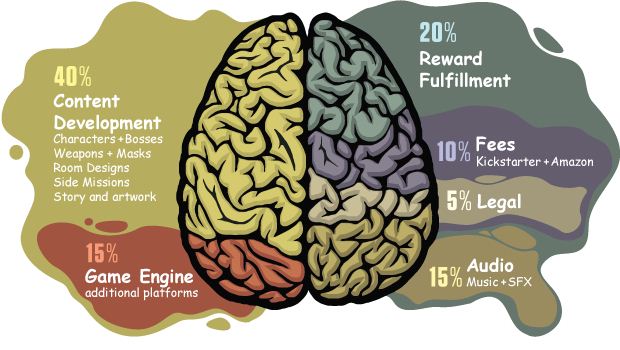 Whenever I see an upcoming game on Kickstarter or IndieGogo, my mind immediately jumps to “why resort to crowdfunding?”, and this is no different. Well, Tony Dimovski claims that a successful campaign will enable him to expand the number of rooms, add more zombie types, create as many weapons and faces (masks) as imaginable, and more. Basically, your average crowdfunded development plan. Certainly beats not knowing why a developer is in need of additional funding, and more importantly, why you should help him/her/them get it.

Far as I can tell, he’ll continue working on Zombie Mode, regardless of whether the funding goal is reached in time or not. The current launch window is ‘spring 2014’, at which point shark masks will invade Windows, iOS, Android, and OYA. I’d recommend supporting it, because if nothing else, at least it’s a rather unique take on the whole zombie thing. Also, Greenlight and… BRAINS.