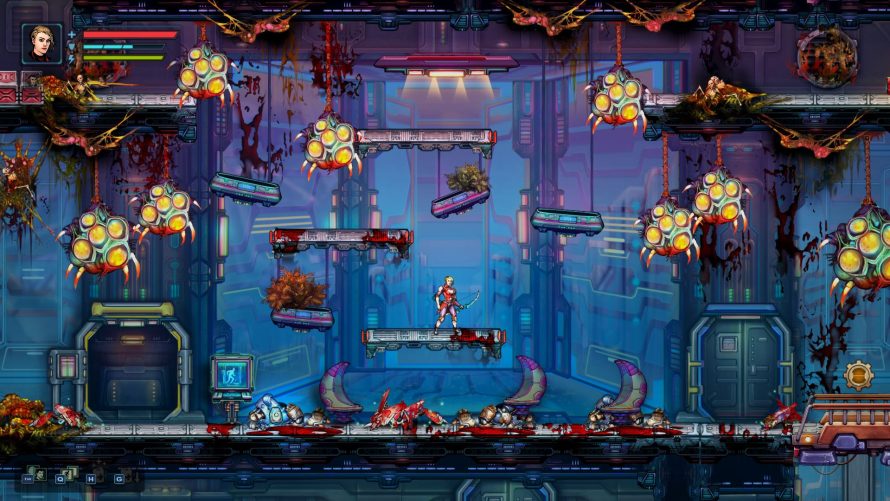 Carnage and crazy weaponry awaits those brave enough to step into the shoes of two members of “the warrior caste of the future humankind” (wait, what?). By which I mean that it’s time to kick you-know-what while chewing aliens in this upcoming action platformer which has you controlling not one, but two characters. Did I mention the mutants? Because Lost in Sky has mutants, and not just a few either.

But how’s a set of would-be heroes (read: soldiers) to accomplish all this you-know-what kicking? Well, I’m glad you asked because the answer is surprisingly simple: by working together as a team! Alright. Job’s done. Now go play the game.

Soldiers’ goal is to fight against the hordes of mutants threatening the population of the City, core of the great spaceship ARK.

Right. Anyway, as I was saying… much like those of other 2D action titles these days, Lost in Sky also features levels full of puzzles and maze-like corridors, with “the atmosphere of a great old-school action game” to complete the package. Sounds like a good time to me, and the fact that you’ll have to coordinate actions with your partner (alone or with a friend, according to the Steam page) doesn’t exactly hurt the odds of this game bringing fun to the table either. A table which, by the time the credits roll, is likely going to be overflowing with entrails of so many squashed monsters. Glorious stuff.

Lost in Sky will be on Steam, “soon”.