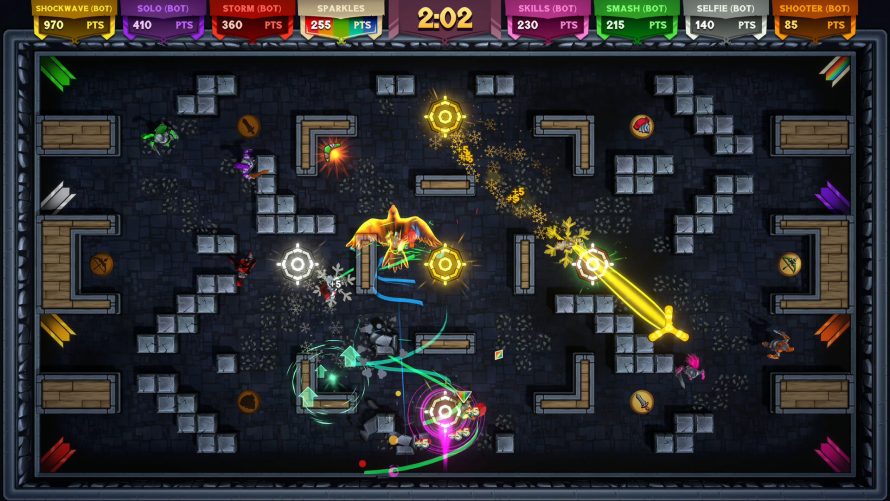 Never a dull moment with these guys. Wherever the knights are duking it out in Knight Squad 2, rest assured, it’s a place where you’ll want to join the spectators. Perhaps even the participants, provided you can persuade one of the eight to sit this one out? At some point, someone is bound to get exhausted from all that chaos and carnage, after all. Someone who isn’t me.

Like any good party game, Knight Squad 2 lets you customize a slew of aspects no matter the chosen mode. Slippery floors? Sure, why not! Exploding corpses? Well yeah, what could possibly go kaboom there? Oh, and while the developer claims weapons are straight out of the Middle Ages, I have to say, not sure proximity mines were a thing back then. Does it matter though? Hardly, because it’s bound to make things more interesting – much like the exotic (wait, what?) boomerang.

Knight Squad 2 heralds the return of a beloved multiplayer experience literally anyone can play and enjoy.

Getting a game started is so easy that chances are everyone, no matter their skill level or familiarity with video games, should be able to join in on the fun. Or as its creator puts it, “move around the field, swing your sword, block enemy attacks, grab a bazooka, mount a unicorn, annihilate your rivals and become the champion!” Yup. Simple stuff. Simple and completely one-hundred-percent bonkers. Love it. Ah, in case you for some reason can’t get seven other people to join, even with cross-platform multiplayer being a thing and all, AI opponents are always ready for a piece of the action. Just be sure to adjust them accordingly, or you might be in for a tough time.

With a multitude of game modes to choose from and so many things to tweak prior to starting a new round, I suspect Knight Squad 2 should have no trouble joining the ranks of party games still actively played years after release. But since precognition is not a power I (currently) possess… we’ll just have to wait and see. Armor up, knights!