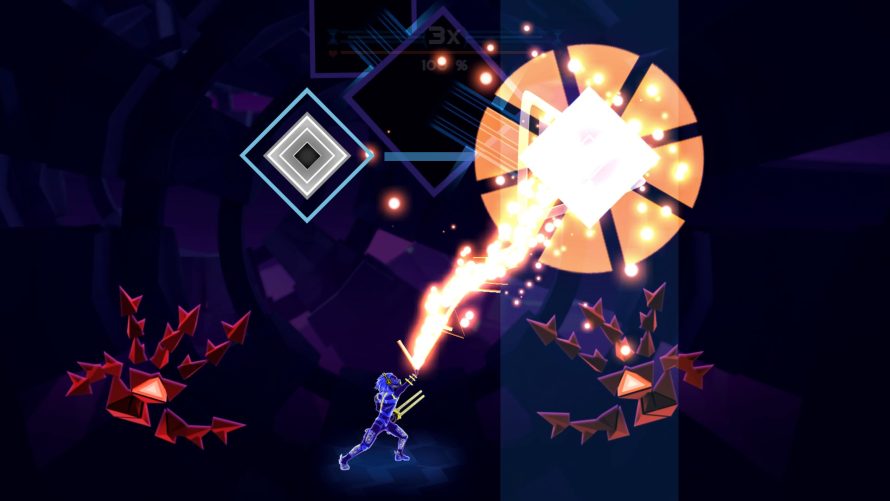 Can you feel the beat? No? Well, that’ll most certainly change once Klang 2 hits digital storefronts as then you’ll be busy fighting your way through an onslaught of rhythmic encounters, armed only with magical tuneblades. Confused? Oh don’t worry, it actually somehow makes (almost) perfect sense.

Unlike most rhythm games nowadays, which are really only playable with either keyboard or a gamepad, this one goes a little bit further. Almost overboard, I’d say, supporting “numerous control inputs” including… wait for it… gamepad, mouse, and even drawing tablets. Because why not? A lot of people have them anyway – might as well use them for a rhythm game! Bit of an expensive controller though, so I personally wouldn’t recommend it. But… anyway, on a related note, controlling the protagonist and performing every action available is, on paper, surprisingly simple: the move set is divided into three very distinct categories: strikes, dashes, and holds. So like I said, simple. On paper.

Based on the trailer below, I’d wager actually playing and getting really good at Klang 2 is going to require lots of practice. The tools at your disposal – flinging fireballs with strikes, dodging and countering attacks with dashes, and holding to channel your inner Zeus – might sound incredibly powerful, and I’m sure they are. But remember, this is a rhythm game, not ‘just’ a platformer and within, a grand total of thirty levels of pumping EDM (Electronic Dance Music) mayhem awaits with challenging boss fights and what its creator describes as a “semi-procedural combat system” – all of which should come together to truly test those rhythmic abilities you claim to have. Wow.

So, interested in sampling the goods, so to speak? If you have an Xbox One, you’re in luck: as part of Summer Game Fest (July 21-27), publisher Ratalaika Games and developer Tinimations will be releasing a demo on that very platform. A demo featuring “numerous stages ranging from the default route, to a boss fight and all the way up to an “Insane” challenge at near peak difficulty”.

Steam? PlayStation 4? Switch? Guess those will just have to wait for its planned launch, which is still at some point this year. At least Xbox One users will be able to get some hands-on time and experience music from bLiNd and other talented artists like James Landino, Arcien, Nhato, Savant, Steven Silo, City Girl, cYsmix. Groovy. In more ways than one.

Klang 2 (published by Ratalaika Games) will be on Steam, Switch, PlayStation 4, and Xbox One later this year.