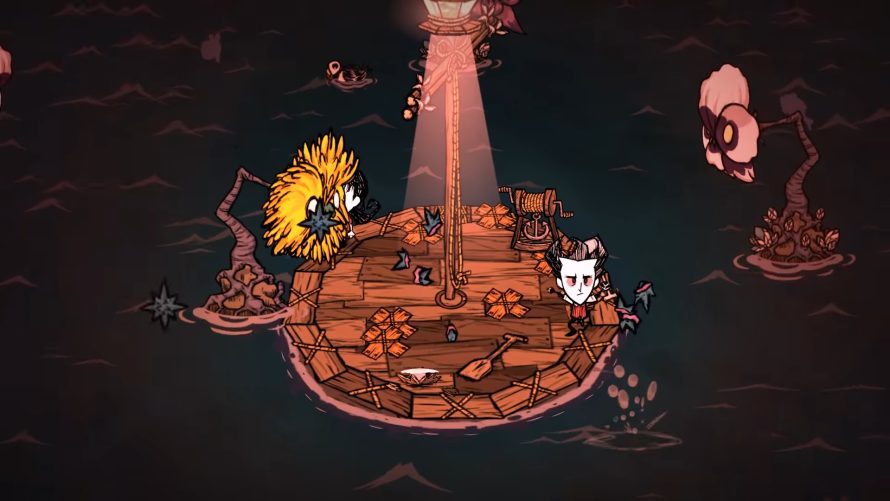 Troubled Waters. Fitting name for this update to Don’t Starve Together: Return of Them, if there ever was one, given the addition of not one but several new threats it forces seafaring survivors to deal with. Sure, there’s some new useful stuff in it too, but… man, these here waters are indeed troubled, now more than ever.

In all seriousness, though, Don’t Starve Together: Return of Them: Troubled Waters contains a decent chunk of groovy new stuff, even if it does also make seafaring ever so slightly more challenging, what with those new beasties and all. I won’t spoil exactly what they’ve thrown into the already hazards waters, so for that – as well as a full rundown of what’s new – you’ll just have to hit the changelog, as linked below all this here text. That said, Leafy Meat can now be cooked in brand new ways (yum!), more mast upgrades are available, as well as a water pump – in case the raft catches fire and… wait, I’m fairly certain you don’t need me to explain the purpose of a water pump, right? Right.

The seas seem to grow more dangerous with every passing day. Is this the work of Charlie, or is the strange, mutating influence of the moon growing stronger? Let’s hope our Survivors can stay afloat long enough to find out.

New critters, creeps, creatures, crafting, etc. – simple stuff. One thing in the list of new features did strike me as rather cryptic, however: “Something to break the lonely nights at sea.” What might that be? Well, only one way to find out, which is to delve right in and get to sailing! Might as well grab one of several new skins that this update brought with it – available both as in-game drops or for purchase. What, Twitch? Oh right, there are new streaming drops too. So many ways to play dress-up anew. If that’s your thing. Which is perfectly fine. Gotta look your best when trying to survive on the open sea. I get it.

Anyway, as is often the case, this one also features a tease of sorts, as far as what the future might bring for Don’t Starve Together: another character refresh… which will be announced in next month’s QOL post, complete with an animated short. Gotta love those animated shorts, and of course, Troubled Waters got one too, embedded below!