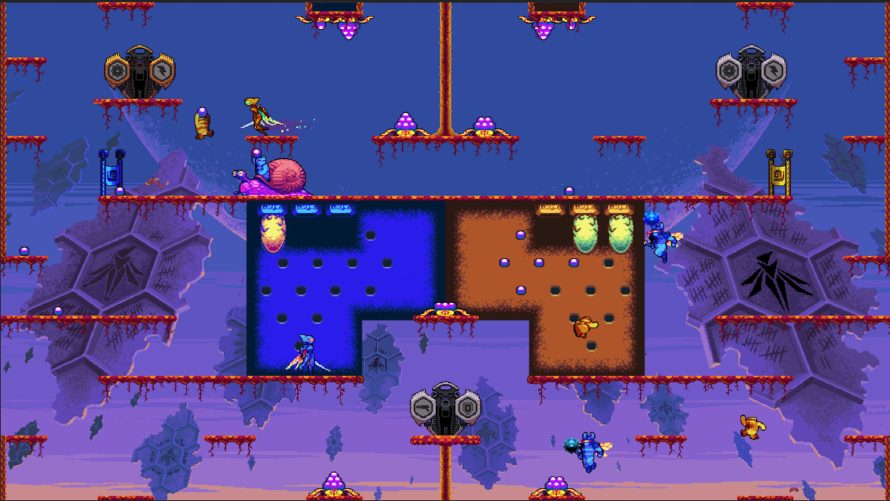 Welcome to The Nesting Flats. Enjoy your stay and… try not to get absolutely decimated on this new Killer Queen Black map, ya hear? That said, while it’s pretty safe to say that this addition is the star of its recent update, codenamed Betelgeuse, what with its separation of weapon and power-up gates and what-have-you, there’s a whole slew of other improvements, fixes, changes, even some party stuff in there somewhere.

So let’s see what we’ve got here. Ah yes, joining a game from the Friend List is now possible, much like the ability to add controllers/players everywhere instead of just on the party screen. See? Party improvements! On a (somewhat) related note, Custom Match UI has been modified ever so slightly and there are multiple ways for someone to join these. Groovy. Oh, and voice/lobby chat has been separated into Match and Team, which should help make conversing easier for those heated bouts when everyone’s talking at the same time. I hope.

“Killer Queen Black is a great game to spend time with people and connect,” said Mike Chorak, Chief Architect at Liquid Bit. “With that in mind, we’ve made it easier than ever to play together.”

In light of The Nesting Flats joining the ever-growing list of battlegrounds, which I believe is now at a rather lovely seven, it seems fitting to go back and tweak one of the originals; namely, The Helix Temple. Gates are now further apart and berries have been, well, changed. Not just in that particular level either, as berry throwing has received a slew of tweaks with this update – far too many for me to list, or even make sense of as I have yet to actually experience Killer Queen Black myself (I know, for shame). So how about I leave you with one final tidbit of undeniable importance and redirect your attention to the changelog? Here it is: Steam achievements!