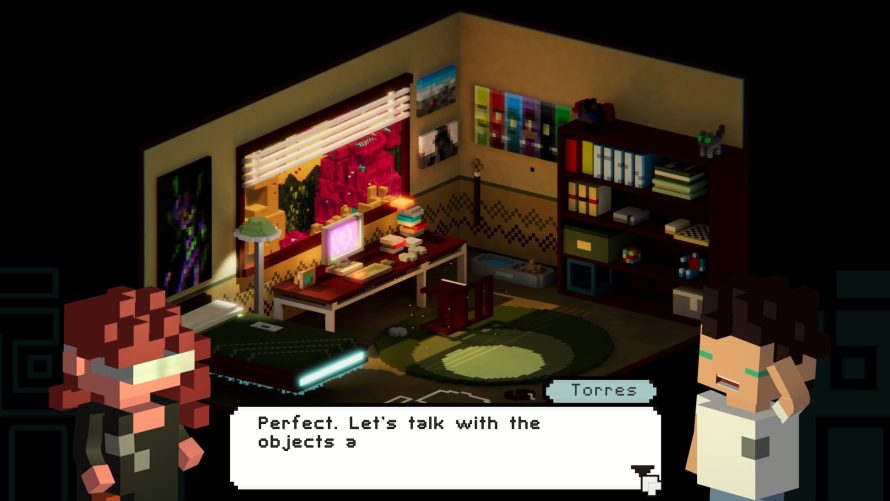 Dreams. Once upon a time, the topic of much confusion, discussion, and researchers were quite excited at the prospect of deciphering this all-in-your-head phenomenon. That was then, this is now, and in the dystopian future of Oniria Crimes, mankind has colonized the sphere of dreams, constructing a sprawling metropolis. If not for the fact that crime is running rampant in the Land of Dreams, this would be… a dream come true.

Not thereby saying that all hope is lost and that the troublemakers should just be left to their own devices. Heck no. A secret society known as the Rounders is actively working to thwart trouble such as this, and that’s where you, the player, come in. By stepping into the shoes of Detective Santos and Inspector Torres and doing more than a little investigation in this voxelized world “where the dreams of all humanity converge”, maybe, just maybe, criminals will be put behind bars where they belong. If that is in fact how such are handled in this here dream city, aptly named Palace of Desires.

So, gameplay! Well, how does a mix of visual novel-esque storytelling and point ‘n click inspired puzzle/investigation mechanics sound? Strange? I’m inclined to agree, although keep in mind that the entire game will, as far as I’m aware, be taking place in dreams. And in dreams, anything’s possible, including talking to items for clues, rather than simply… you know, dusting for prints and other classic detective stuff. An example of this can be seen in the trailer below and were I to point at but one thing about Oniria Crimes that truly caught my eye, there ya go.

The Rounders must move fast because the clues are volatile in the dream world. They will have the help of the objects at the crime scene, which are the witnesses of the murders.

Speaking of the trailer, there are aspects I am quite curious about, ones neither trailer nor website (or Steam page, for that matter) does more than just… show. For instance, what’s the deal with that tile-swapping puzzle (if it even is one such)? And how about the train station? Both only offer brief glimpses, and that’s obviously not a lot to work with. Perhaps their intent with those two moments was to simply pique one’s curiosity? I’d say there’s plenty to latch onto already though, what with the Guilds of Oniria fighting for supremacy (because democracy simply won’t do for this lot), a crime spree to deal with, and “nightmares” lurking in the shadows, moving ever-nearer. Basically, you-know-what is about to get real. Very real. Unless someone can figure out what’s what and set things right. Before it’s too late.

Oniria Crimes will be on Steam, Switch, PlayStation 4, Xbox One, Android, and iOS, come October 28th.