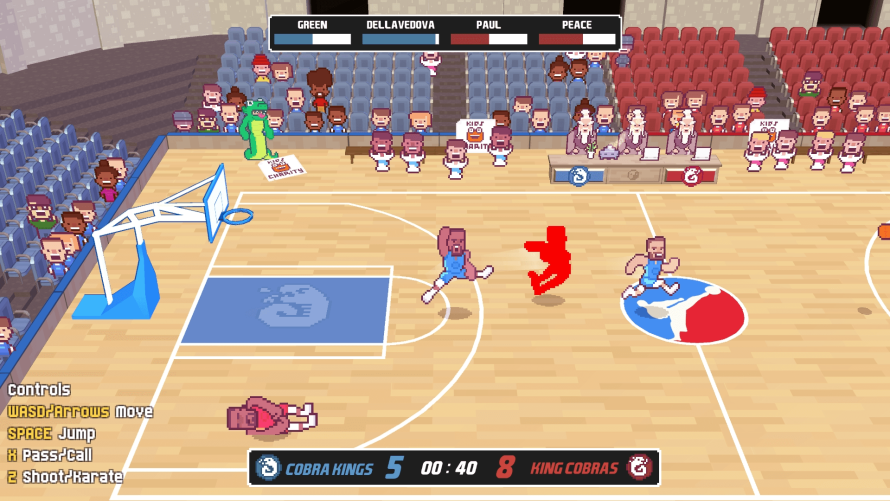 After playing a few rounds of Karate Basketball, I’m left wondering if its creators are completely bonkers, brilliant, or a bit of both. Probably the latter, as mixing the two sports are surprisingly entertaining! I mean, why settle for playing by the rules to acquire the ball when you can punch and kick instead? Oh, and passing the ball doesn’t mean you’re safe from a beatdown either, even though… it kinda should. Or should it?

Either way, Karate Basketball is but one of several thousand games that came to be during last month’s Ludum Dare 37, and so far, also the most impressive (of those I’ve gone through, that is). The only downside, quite frankly, is the complete lack of multiplayer. But we are talking about a title that came to be in a very short amount of time here, and no one’s stopping SeaDads from continuing development post-jam, adding that very thing.

For now, we’ll have to settle for duking it out on the court as Cobra Kings, playing against King Cobras, passing, shooting, punching, kicking, dunking and taking power naps every so often when the action gets too intense (read: after taking a heavy beating). All because of a supposed scheduling error. Yeah. Scheduling error. Sure. I’ll believe that. Now if you’ll excuse me, I believe another game of Karate Basketball is about to start.

'Kissing Your Homies Goodnight' Review: The Art of Lip-locking