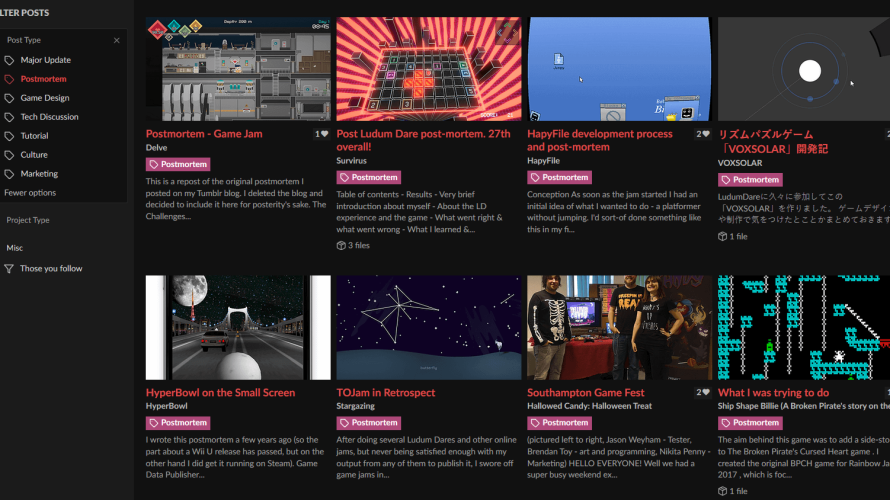 It’s taken a while but your game’s out the door and… is not all that popular. What do you do, aside from trying to figure out why and – hopefully – fixing the cause? Well, most would probably move onto something else, admitting defeat. But before you do that, why not write a postmortem, detailing the development process, what went right/wrong and such? Especially if your project is on itch.io, as they recently added devlog support for these!

While I can not stress the importance of a postmortem, and that goes doubly for popular titles, a devlog is even more important; you’d be surprised how many enjoy reading about what’s going on behind the scenes while a game is still being made (spoiler: I’m among them). That and, needless to say, it does help generate pre-release hype, so there’s that too.

Typically post mortems are done by developers with a focus on education– if you check out the post mortem tag right now you can see posts about game jam time management, changing engines, and convention experience.

But this is about itch.io and its recent postmortem devlog tag addition (that’s a mouthful), which is pretty darn groovy, no matter how you turn and twist it. We could all do with more knowledge, after all, so the more a developer is willing to share, the better, I’d say, and anything goes, really. Just remember, the more in-depth and detailed, the better – they’re postmortems, not tweets!

All that said, this link will take you straight to that part of itch.io, so go ahead, click it… and get ready to read. A lot. People get rather wordy there, which is hardly surprising; we humans do enjoy talking about ourselves and what we’ve been up to, which is exactly what a postmortem is – with a strong focus on game development.

(Source: Post mortems are here on itch.io! Write them, read them, and support developers!)