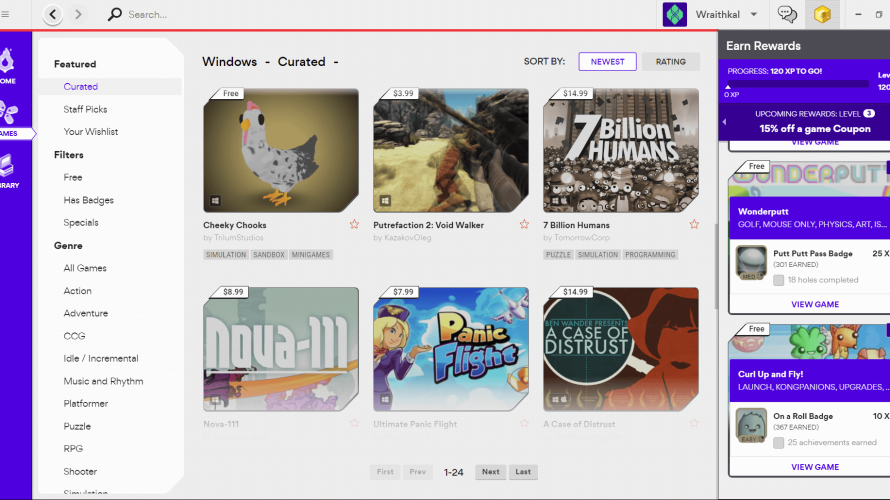 Another competitor for our hard-earned time (and money) enters the fray, Kongregate having recently launched its own indie-centric gaming platform/store, Kartridge, in open beta. But unlike its competitors, this is more than yet another place to pick up and play games – not all of which carry a price tag either, I might add – as a degree of gamification has been applied: earn XP and level up… by playing games!

It’s an interesting system that many seem to enjoy, and one that’s been around for quite a while on the Kongregate website. At its core, this enables users to earn badges (read: achievements), each of which yields a certain amount of XP, and eventually, the account will increase in level. While this may sound a tad pointless to those not excited about the prospect of virtual trophies, the fact that certain levels yield tokens which can be exchanged for premium titles on the platform should help generate some interest. Maybe. We’ll see.

With “over 250 titles from over 100 founding developers” in this open beta launch, Kartridge is bound to have something for even the pickiest players – and hey, more will be added down the road. Oh, did I mention how developers will see “100% of the revenue earned on their first $10,000 in sales”? While I don’t have specific numbers for Steam, GOG.com or itch.io, I am certain that none of them have a policy like that in place. Whether that’s actually good or bad – for them – I do not know, but good on Kongregate for trying something different at least. Makes me wonder how large a cut they take after that $10,000 has been reached, though.

“As we keep expanding into a rich social playing experience, players can expect to see great, new games added each month, community events, and plenty of reward opportunities on the platform.”
— Theresa Chien, Kongregate’s Creative Director of Platform

On the social side of things, each game has its own chat ‘room’ – something I’m sure will help with the creation of communities, and if not that, then it’ll give players somewhere to converse while they calm down after dying for the umpteenth time to that darn boss. Alternatively, there are also larger, more general rooms, for times when a broader discussion is on the menu.