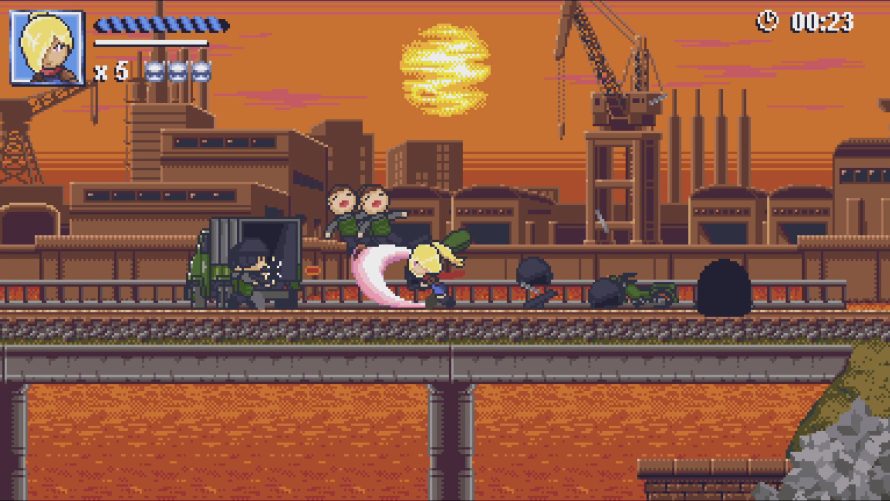 Ugh. Another corrupt empire. It’s almost as if those things are being manufactured by the dozen somewhere. I know, I know. That doesn’t really make much sense. Not a problem, because you’ll be too busy playing the part of Tanya and/or Olga in Infinite -- Beyond The Mind to worry about the tyrannical Beljantaur Kingdom. Too busy destroying it that is, in this gloriously pixellated platformer.

Oh, and in case you absolutely need a reason to kick you-know-what and take names: Queen Evangelyn has abducted someone important to the protagonist. There. Now to blow stuff up in close combat, call in “screen-clearing bombardments” and make the most of enemy mounted gun placements to turn the tables on those poor bastards. By which I mean… they deserve everything that comes their way. Including the crazy tag-team shenanigans provided by drop-in/drop-out co-op play. Why? Because it is undeniably dangerous to go alone.

Battle as Tanya or Olga through 16 side-scrolling stages rife with enemy troops, platforming challenges, and intense boss fights. Perform acrobatic double jumps and dodges to elude oncoming fire and surmount environmental hazards while closing distance between enemies to cut them down in close combat.

With a mix of fast-paced co-op enabled action -- and the odd side-scrolling shmup sequence every now and then for good measure -- and some pretty groovy tunes to round out the experience, Infinite -- Beyond The Mind certainly looks like a good ol’ time. We’ll see how it all turns out come launch, though. Until then, be sure to give the trailer below a go and hey, go ahead and give Emilie Coyo (the developer) some feedback via. Twitter while you’re at it.