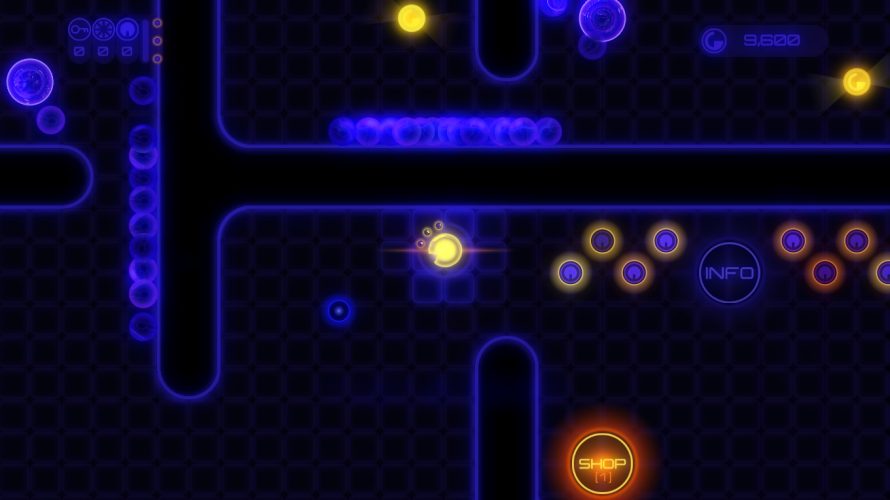 Over the years, we’ve seen many popular twin-stick shooters in various forms, from the arcade-themed Geometry Wars to the music-driven Beat Hazard, but Inferno+ remains a breath of fresh air. What exactly makes this one stand out in a genre this crowded?

At first glance, it may not seem like Inferno+ does anything we haven’t already seen in many other games already, but underneath the flashy visuals (which can be toned down a lot, for those who prefer playing with less bright in-your-face colors) and deceptively simple mechanics lies a RPG system; light as it may be. Initially, your ship is far from the most powerful or maneuverable one in this galaxy and since not a single enemy here care to show mercy, it’s a good thing that your ship configuration improves over the course of the game, because in the in later stages you’re certainly going to need all the firepower and speed you can muster up! 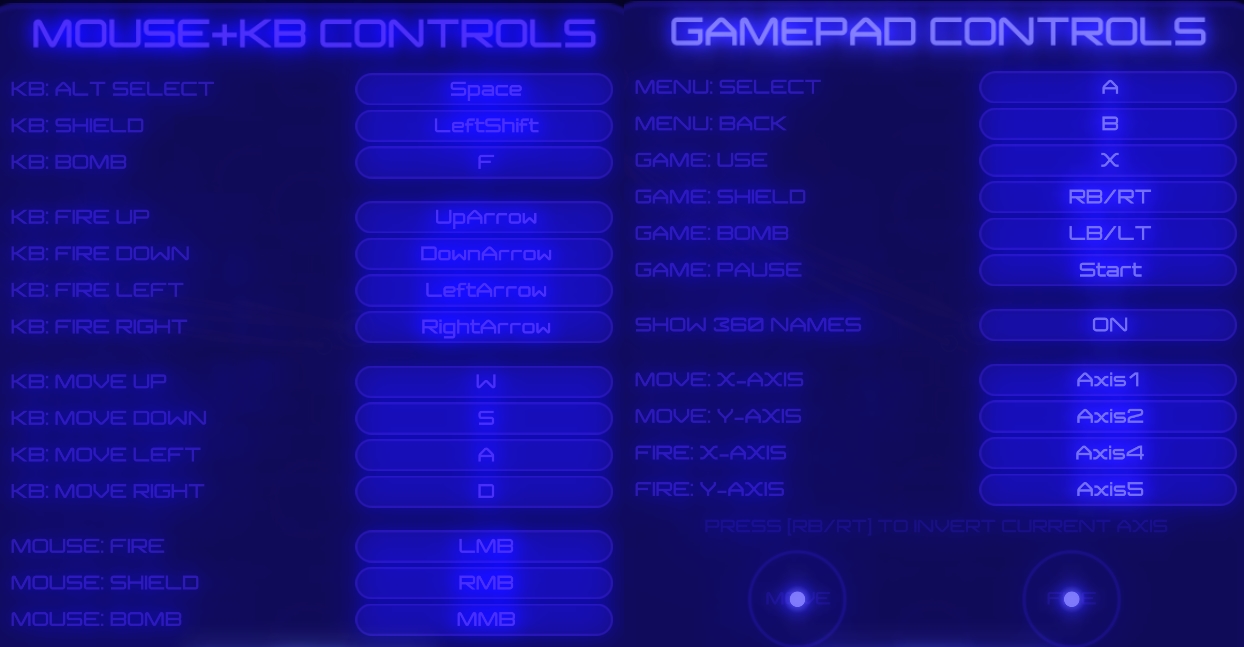 The controls are simple and everything can be rebound should the defaults not prove satisfactory. Your keyboard is used for movement and the mouse for aiming, left button fires your weapons while holding down the right button activates your shields. I was quite surprised to find that it actually plays better with that setup than with my 360 controller, seeing how that hasn’t been the case with many similar games.

Normally in this kind of game destroying your enemies nets you points, but that’s not quite the case here because in Inferno+ you earn.. money! These are used for plenty of things too and in spite of this being a partial RPG, there is actually no way to ‘grind’, so spending those few extra minutes searching every corner before racing through the big exit leading into the next level might not be a terrible idea; I’d advice caution though, as ‘checkpoints’ only exist at the beginning of each level. 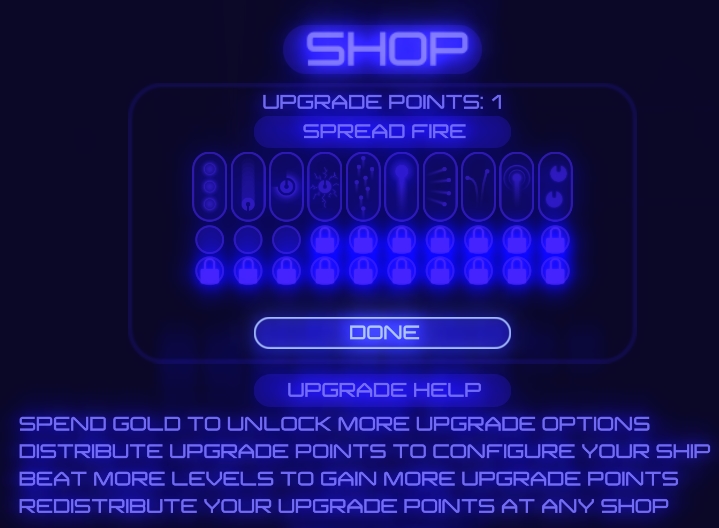 It’s almost mandatory for RPGs to have a shopping system and this one is no exception as there is a shop in every single level. There’s no need to rush through traffic (or enemies) either, because they’re open 24/7 and this is where things get interesting as both permanent unlocks and consumables (items that disappear upon use) are on the store shelves. Like most other RPGs, Inferno+ has a leveling system which works like this: Upon reaching certain stages you’re awarded with an additional skill point, but before you go spend them on flashy upgrades for your ship, you have to actually purchase access to each, which is anything but cheap. After that, you’re completely free to pick and choose between all available skills, provided you have enough points as each requires one to enable.

Your skill arsenal include things like making shots bounce off walls, making them semi-heatseeking, increasing the movement speed of your ship and upgrading its shield strength among other things. There is one tiny flaw with the skill interface however: You’re never told what they do! So the only way to figure that out, is by paying to unlock each followed by trying it out – not exactly optimal. They do have icons that hints at their purpose though, but an explanation tooltip would have been nice.

Unlocking those is not all you’ll be spending cash on though, as keys and bombs are up for grabs too. Both can also be found spread across each level, so their place in the shop is mostly if you’re feeling lazy and/or have too much money. Other than that, you can purchase more of those tiny drones that buzz around your ship, and these are certainly your new best friends as they not only bring additional firepower along, but will also gladly take a hit so you don’t have to (gotta love them eh?).

But even if the shops never close, don’t forget that there are enemies to get rid of and 40 stages to clear (and New Game+ after beating the game) outside the comfort of those mini-malls and these guys come in all kinds of shapes and sizes, but they do have one thing in common at least: They all want you dead! 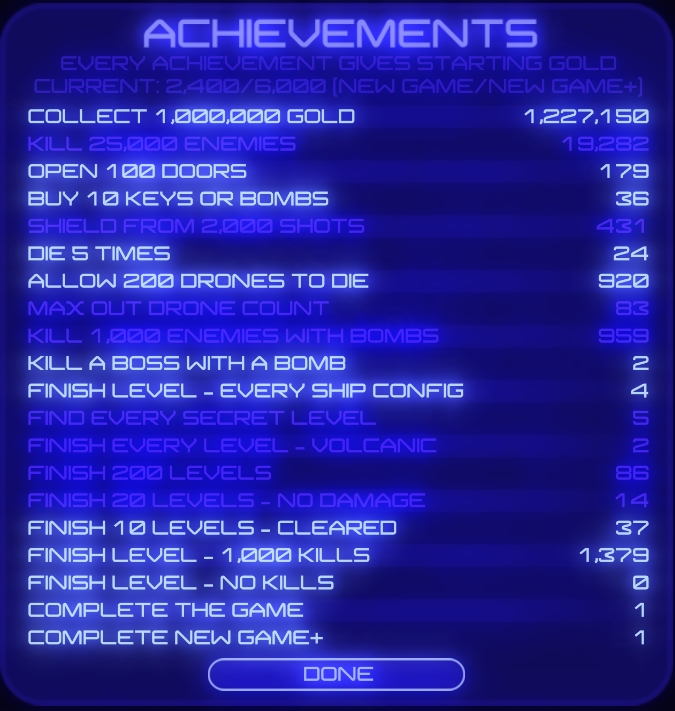 What, 40 levels aren’t enough for ya? Try finishing New Game+ and grab every last achievement then. I’m sure you won’t be wrapping up everything this one has to offer anytime soon, and those who want a genuine challenge should play on ‘volcanic’, which is the highest of 3 difficulty levels; just remember: There are no mid-level checkpoints!

Be sure to check out the Radiangames website for more information on Inferno+ along with their other games.

Facebook Twitter LinkedIn Pinterest Tumblr WhatsApp Telegram E-mail
Previous article It's V for Victory as Humble Indie Bundle V Puts the Competition to Shame
Next article Get Ready to Think With Portals In 2D: 'Gateways' Is Out