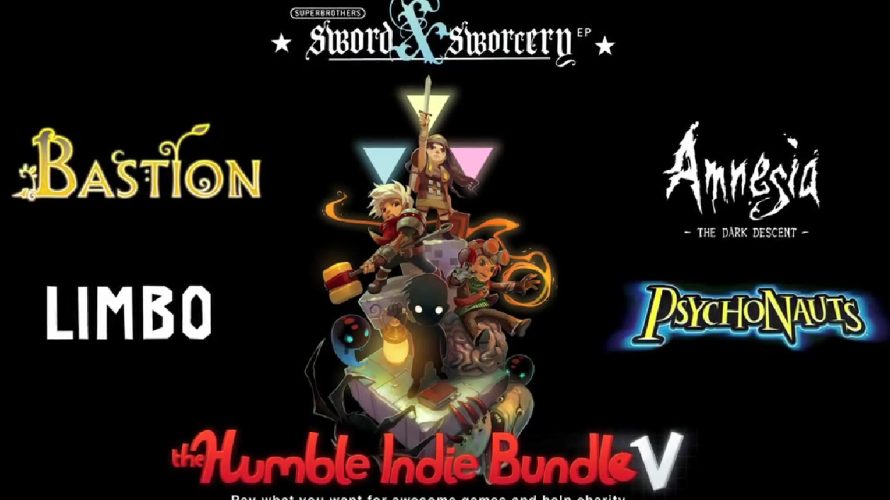 It’s no secret that I’m a huge fan of indie games and just like most people I appreciate a good deal, so when Humble Indie Bundle V went live I was beyond thrilled.

At launch, the lineup of games included was already very impressive but the organizers were not simply satisfied with Superbrothers: Sword & Sworcery EP, LIMBO, Amnesia: The Dark Descent, Psychonauts and those who paid more than the average price got Bastion too. On top of these five incredible games, soundtracks were also available.

People quickly jumped at the opportunity to get five high quality indie games for an extremely low price and only 23 minutes after launch, the sales count had passed 10.000! Obviously only the organizers knew how many were picked up for $1, which was the minimum price in order to get a Steam key (following a Steam related problem during last year’s Christmas competition, where people picked up bundle keys and made dummy accounts in order to acquire more tickets for the raffle – what a despicable thing to do). And if you think 10.000 sales in 23 minutes was crazy, how about indie gaming fans dropping more than $2.000.000 on the bundle in little over 24 hours?

Currently, the counter is approaching $3.800.000 and just passed 460.000 sales, so I’m sure that yesterday’s additions which – for those who pay/has paid more than the average – were Braid, Super Meat Boy and Lone Survivor are likely going to help push sales beyond that $4.000.000 mark.

Those who prefer Mac or Linux over Windows need not ignore this bundle thinking it’s all Windows (like a lot of things are), as all games included are cross-platform; plus, the launch of Lone Survivor on Linux is taking place in this bundle but it will also be available to those who buy the game from the Humble Store on the developer’s site, so in case you’re a Linux user reading this too late to pick up a copy of the bundle for Lone Survivor, there’s that alternative at least.

Just like with previous bundles, the buyer gets to decide how to divide the money he/she spends between charity, the bundle organizers and the developers – something I personally greatly appreciate. Another thing these guys do, that I’m a big fan of, is charity support (something other bundles really should do too) and this time the two causes are EFF and Child’s Play.

Even if it’s only the 5th numbered one, this is actually the 13th Humble Indie Bundle but it seems no superstition is involved because so far this is the most successful bundle ever and there’s still more than 6 days left at the time of writing, so watch the awesome trailer for the bundle below and then pick up a copy of Humble Indie Bundle V already!