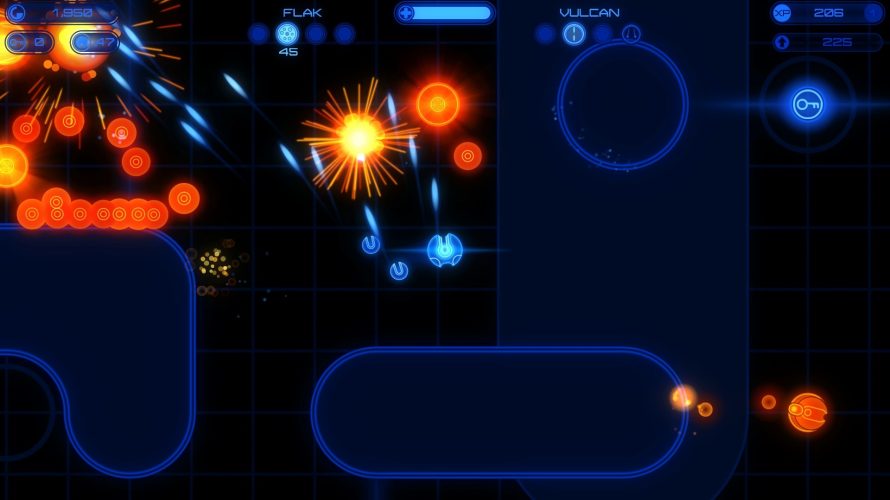 At first, everything was simple and manageable, with barely any opposition. A few enemies here and there in need of some gunfire-to-the-face – hardly enough to make me break a sweat. But then, little by little, their numbers grew, along with what they were packing, to suddenly find myself surrounded by colorful explosions as shots went flying left and right. Or put differently, Inferno 2 is fun, fast, furious, and so very stylish! Groovy.

Like its precursor, Inferno+ (which I reviewed back in 2012), Inferno 2 is a twin-stick shooter in which you’re up against relentless foes (on Volcano difficulty, at least), the whole thing bathed in flashy neon lights, complete with RPG elements. It’s also incredibly addictive, with a New Game+ mode that really ups the ante once those initial 80 levels have been cleared.

During the first few levels, some are bound to find themselves wondering what on Earth I’m on about, with all that ‘colorful explosions’ and what-have-you nonsense, as the early stages are… well, a tad slow-paced. Ain’t long before it ramps up though, as by the time that level counter reaches double digits, not only will your arsenal be noticeably more powerful, your ship will also be more sturdy, courtesy of a leveling/upgrade system. Needless to say, even on Warm (lowest difficulty), unless you’re an absolute genre pro, any upgrade is a good upgrade. 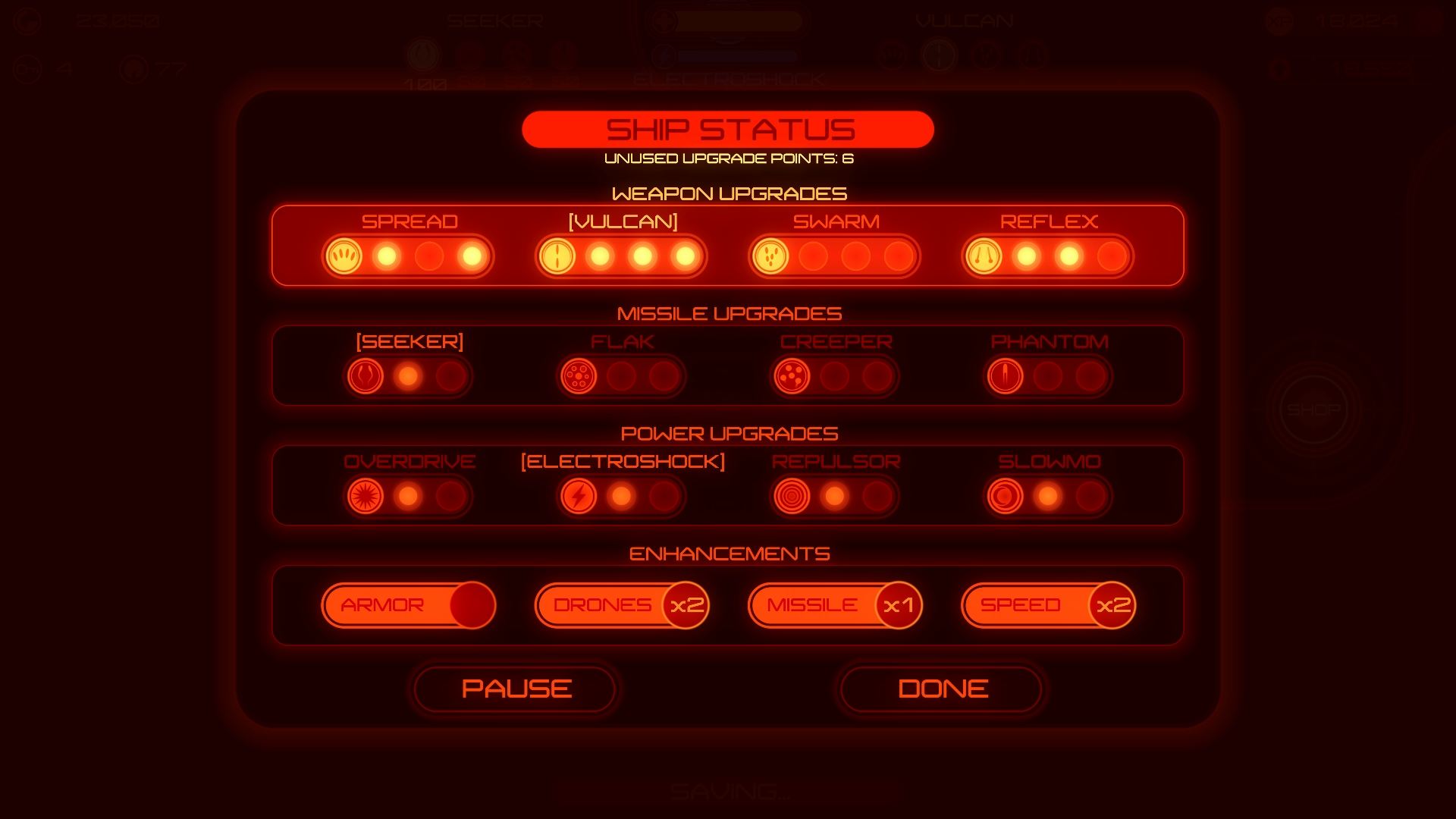 With four different missile and weapon types, each with three unique upgrades to acquire, there’s plenty of room for experimentation, as well as finding a playstyle that suits each individual. That said, having finished the eighty levels and a good chunk of New Game+, even when fully upgraded, the Vulcan – a thin, rapid-fire weapon – kinda made the other three seem kinda lackluster. Same goes for the missiles, really, as Flak – an explosive spread – more than managed to get the job done.

There were times when the wall-bouncing shots from Reflex proved useful, but they were few and far between, acting more as a convenience than anything else. Although… maybe that’s actually by design? I mean, being able to shoot like you’re playing pool, banking shots to hit enemies from an angle where they don’t have a clear shot, that definitely has its uses, given the layout of Inferno 2‘s levels.

See, in most areas, you’ll have to navigate tight corridors, enemies rushing towards that poor, (somewhat) fragile ship of yours, which can make for some tricky, near-death escapes, let me tell ya. But every now and again, a spawner will be placed near a corner or a wall, enabling you to safely eliminate it from a distance with Reflex. Oh and then there are the secret passages, accessible either by explosive means or a pass-through section of wall, along with blockades! Some can be fired through, even though your ship can’t traverse them, while other are entirely solid. Just remember that line of sight is a two-way street. 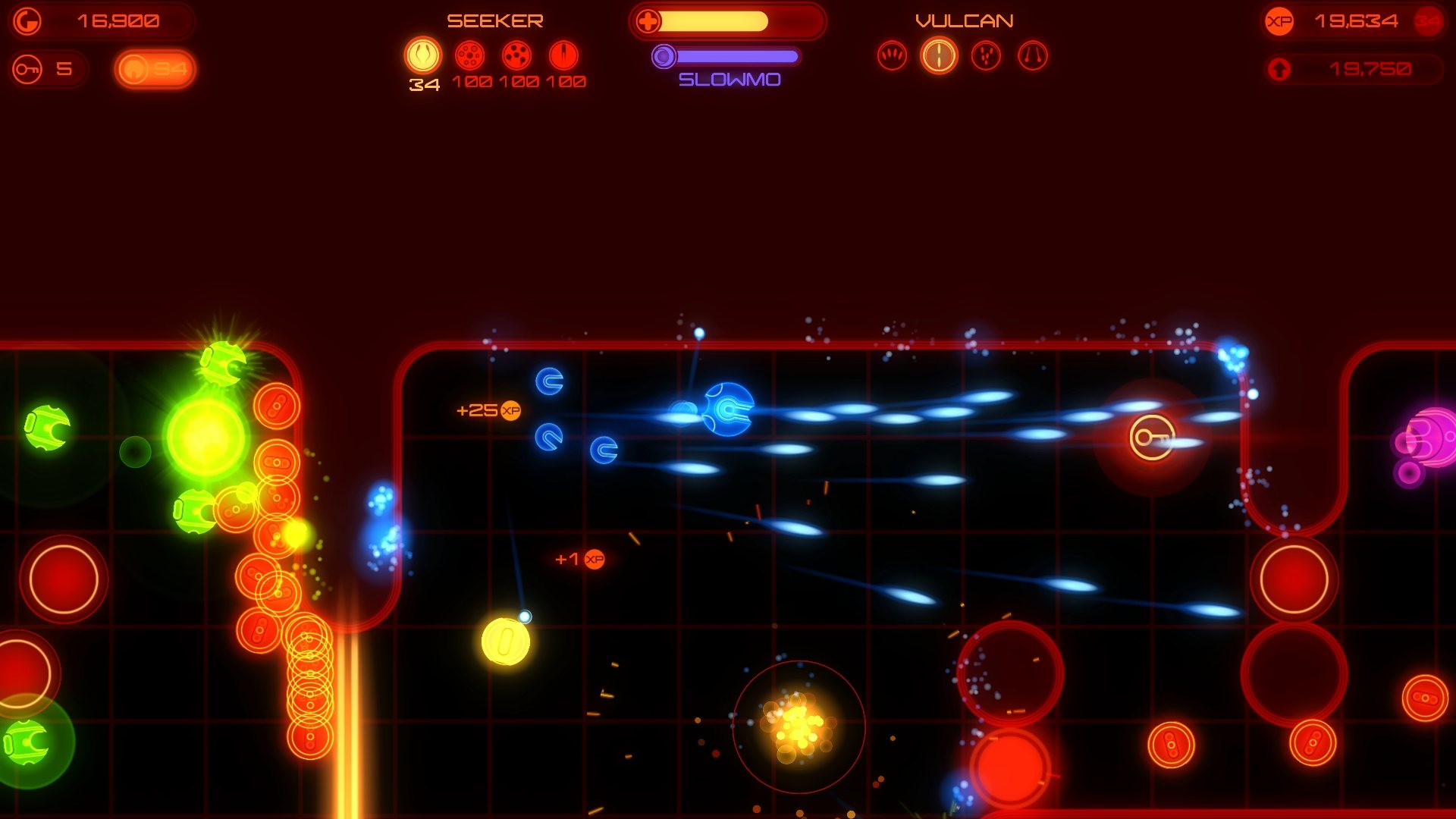 As far as enemies go, Radiangames seems fully aware of the fact that variety is the spice of life. Several different shades of orange, purple, green and red are all present and accounted for after all, and this lot has nothing better to do but to hunt you down. Fortunately for you, however, while they do have strength in numbers, most are actually easily disposed of, packing little to no defensive means. Less so for those that actually return fire, however, and there are also some who enjoy warping around the battlefield or exploding in a circular blast upon dying! Protip: avoid close range kills whenever possible. On top of that, some can only be injured by way of missiles, which is, for the most part, a somewhat finite resource.

I did mention earlier that the game has a leveling system but rest assured that this does not translate to any kind of ‘grinding’, as enemies do not respawn. There are in-between bonus levels, which has you racing the clock to accumulate as much XP, loot (additional missiles, ship repairs, etc.) and currency, only accessible through alternate exits. Useful for powering up, especially on Volcano difficulty, although I suspect most won’t find more than a handful of these, as they’re rather well hidden.

Each level gained also doesn’t make you substantially more powerful, so it’s more a case of ‘every little bit helps’, and you likely won’t have everything upgraded by the time the credits roll, so… choose wisely. Then again, there’s always New Game+, ya know? Not only does this let you replay from level 1 with upgrades intact (save for ‘enhancements’), enemies are also far more vicious. But, having just fought them across eighty levels, surely there won’t be any surprises… right? Wrong.

For starters, all your upgrades have been randomized, leaving you with an option to re-shuffle and allocate a handful of points as you see fit (an odd feature, but hardly a bad one). Weapons and enhancements, the latter acting as a temporary boost of sorts, can be further upgraded though, which is going to come in handy for sure as the opposition has also stepped up its game! And how about every fifth level featuring a unique challenge/modifier? Plenty reason to keep going past the initial playthrough, I’d say. 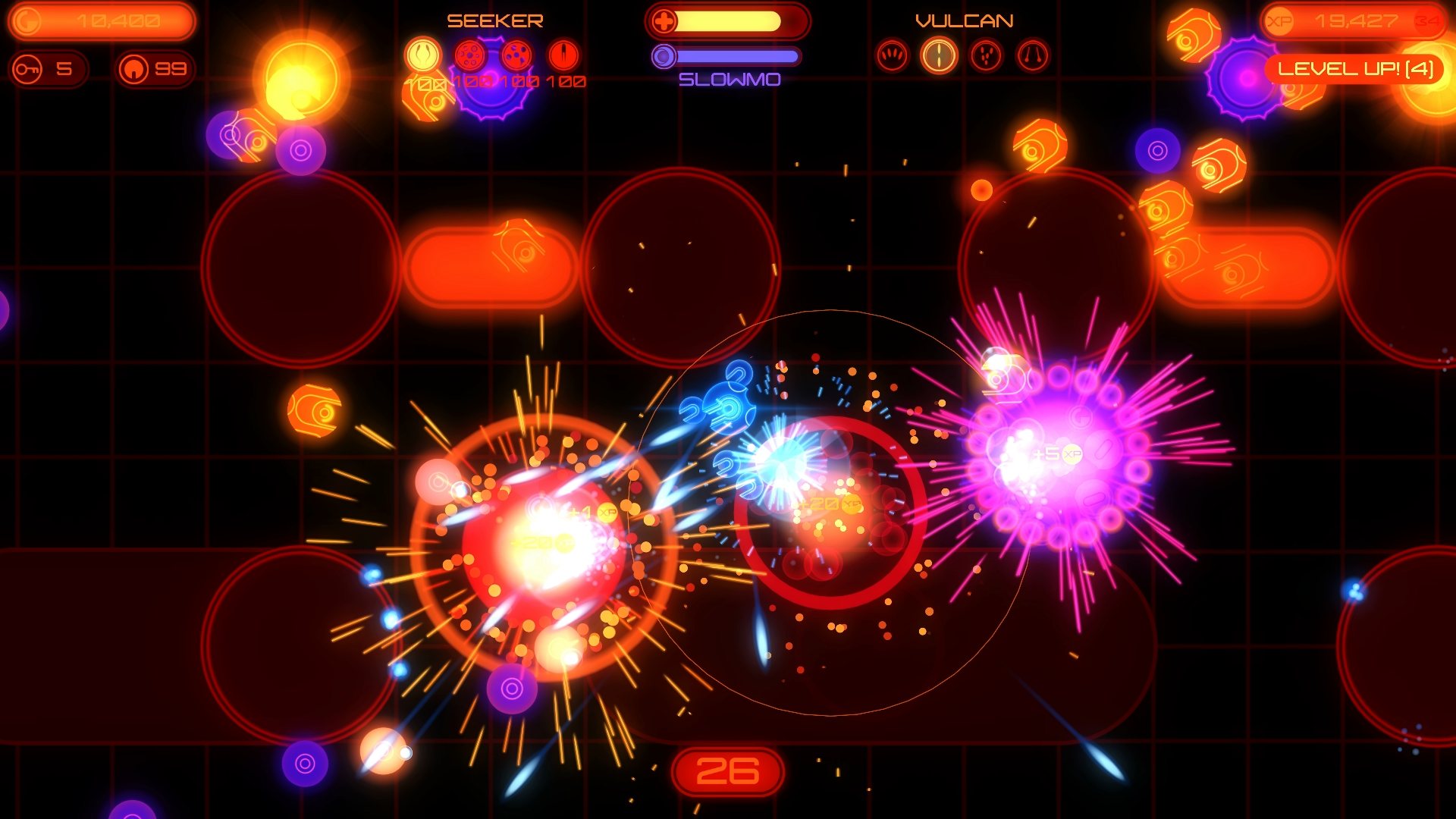 Now, while originally released on mobile devices, this is definitely not some meager rush-job port. The PC version performs admirably in 1920x1080 at a solid 60 FPS on my system after all, and even comes with settings to crank up the flashy visuals or, should you so desire, limit the particle effects instead (like Beat Hazard Ultra). It’s also quite playable with both mouse and keyboard or gamepad, although I’d recommend the latter. It is after all a twin-stick (get it?) shooter.

Bad puns and technical mumbo jumbo aside, Inferno 2 is a very easy recommendation, and even more so for genre fans. With its nicely varied level and enemy design, not to mention the armament, flexible upgrade system, colorful art style, groovy music, and on-the-fly adjustable difficulty… there’s just so much to like. Some might claim that a review is incomplete without even a hint of nitpicking, but I’m coming up empty in that department. Whether that’s good or bad – hard to say.

On a final note, since a lot tend to base the value of a game on staying power: a playthrough will likely last between four and five hours, but after that, New Game+ awaits, and this will easily add another five. Oh and those who fancy achievements will be playing for several times that, as these include the likes of “Destroy 10,000 Enemies” and “Collect 1,000,000 Gold – Total”. Plenty bang for your buck here.