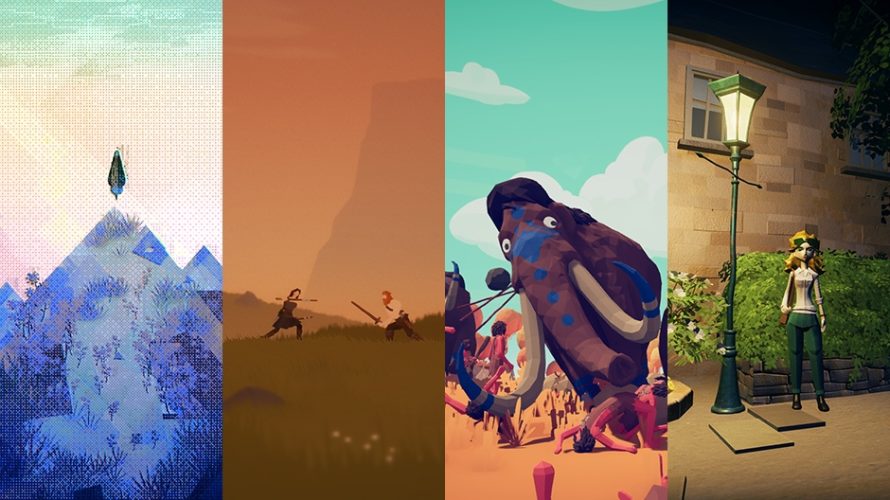 Well, E3 is almost over (again). A lot of things have already been revealed, announced, etc., and among them are… a slew of upcoming ID@Xbox titles! Who needs those super expensive AAA games anyway, when you can have much cheaper experiences that have a tendency to be not only more original and unique but also aren’t from massive money-hungry studios? I might be exaggerating that last part a tiny bit, but anyway, onto the games…

For those interested in straight-up numbers, we’re looking at a grand total of 31 ID@Xbox titles here, of which no less than 24 will be part of the Xbox Game Pass. Pretty darn impressive if you ask me, and the actual contents of the lineup is even better. So how about taking a glance at the lot as listed below, complete with links to their respective websites?

Afterparty (Night School Studios) – Xbox Game Pass
You are Milo and Lola, recently deceased best buds who suddenly find themselves staring down an eternity in Hell. But there’s a loophole: outdrink Satan and he’ll grant you re-entry to Earth. Time to go on the best bender ever. Playable at the Xbox Experience, Microsoft Theater.

Blair Witch (Bloober Team) – Xbox Game Pass
From the creative minds behind the critically acclaimed Layers of Fear, experience first-hand the toll that fear can take on the mind in an original story based on the legend of Blair Witch. The upcoming title is a first-person psychological horror game that studies your reactions to danger and stress. Your darkest fears will awaken on August 30th, 2019.

Blazing Chrome (DotEmu) – Xbox Game Pass
In Blazing Chrome, machines rule the world and the few humans left are on the edge of total extermination, lacking power against their metal overlords. Bring your best pal and kick some metal butts to free the humankind while enjoying a classic run’n’gun, fully loaded with action and exciting fights!

Creature in the Well (Flight School) – Xbox Game Pass
As the last BOT-C unit, venture into a desert to restore power to an ancient facility, haunted by a desperate Creature. Uncover the mountain’s secrets and free the city of Mirage from a deadly sandstorm. Creature in the Well is a top-down, pinball-inspired, hack-and-slash dungeon crawler. Playable at the Xbox Experience, Microsoft Theater.

Cyber Shadow (Yacht Club Games)
The world has been taken over by synthetic lifeforms. A desperate plea for help sets Shadow on a journey to uncover what started the path to perpetual ruin. Only you can unlock the secrets to your clan’s ancient powers in Cyber Shadow, the quintessential Ninja Action game. Playable at the Xbox Experience, Microsoft Theater.

Felix the Reaper (Daedalic) – Xbox Game Pass
Felix works at The Ministry of Death, and he’s in love with Betty the Maiden from The Ministry of Life. He believes that going to the human world as a field reaper will enable him to meet her, so he’s taken the job of making sure people die—while dancing.

Hyperdot (Glitch)
Easy on the eyes, hard on the reflexes. HyperDot is a minimalist action arcade masterpiece with simple rules: dodge everything. Quickly evade enemies and test your skills in over 100 handcrafted trials during campaign mode, outlast your friends in multiplayer battles, or build complex challenges with the custom level editor. Playable at the Xbox Experience, Microsoft Theater.

Killer Queen Black (Liquid Bit) – Xbox Game Pass
Get ready for an intense multiplayer action/strategy platformer for up to eight players. Hop on the snail, hoard berries, or wipe out the enemy’s queen to claim victory. Fly solo, or team up with three of your friends as you race to complete one of three possible victory conditions.

Lord of the Rings (Asmodee Digital) – Xbox Game Pass
Build a deck of iconic heroes and challenge the forces of Sauron in this thrilling tactical card game. Complete story-driven quests and forge a new legend of Middle-earth in solo or cooperative mode. But beware: Sauron is searching for you. If you draw his attention, all will be lost.

Night Call (Raw Fury) – Xbox Game Pass
A murder mystery noire game set in Paris. You are a taxi driver, working to earn enough to pay your bills while aiding the investigation by doing what you do best: getting people to talk while you have their attention.

Pathologic 2 (tinyBuild) – Xbox Game Pass
Enter a narrative-driven dramatic thriller about fighting a deadly outbreak in a secluded rural town. You are a healer, and to save anyone, you’ll have to survive in this bleak and strange world, where even food and medicine are scarce.

Phoenix Point (Snapshot Games) – Xbox Game Pass
From the creator of X-COM comes new strategy game, where players must master challenging tactical combat, diplomacy on a global scale, and resource management as they guide an outnumbered and desperate group of humans to overcome a worldwide alien threat. Procedurally generated, fully destructible combat environments pair with a deep, branching sci-fi storyline to ensure no two playthroughs are ever the same. Playable at the Xbox Experience, Microsoft Theater.

Riverbond (Cococucumber) – Xbox Game Pass
Shoot-and-slash your way through this dungeon crawler set in a stunning voxel world. Adventure solo or with friends to complete missions, battle adorable enemies, and smash everything into tiny cubes! Play with your favorite character, including 8 crossovers skins from beloved indie games like Guacamelee!, Shovel Knight and Enter the Gungeon.

RPG Time (Deskworks)
School’s out! Meet us in an empty classroom for a grand adventure with a young aspiring game developer and his very own RPG. You’re sure to be dazzled by his hand-drawn creations as you journey into the surprising and magical world of imagination! Forget about homework! Come play “RPG Time: The Legend of Wright” with us!

Secret Neighbor (tinyBuild) – Xbox Game Pass
Based in the Hello Neighbor universe, this is suspenseful multiplayer horror game where a group of kids try to rescue their friend from the Neighbor’s creepy basement. Only problem is one of the kids is the Neighbor in disguise.

Spiritfarer (Thunder Lotus) – Xbox Game Pass
Creators of hand-drawn indie experiences Thunder Lotus, return with their unique third production: Spiritfarer, a cozy management game about dying. You play Stella, ferrymaster to the deceased. Build a boat to explore the world, care for your spirit friends, and finally release them into the afterlife. Farm, mine, fish, harvest, cook, and craft your way across mystical seas, as you learn how to say goodbye to your cherished friends. Playable at the Xbox Experience, Microsoft Theater.

Supermarket Shriek (Billy Goat Entertainment) – Xbox Game Pass
This is a unique (shopping) cart racer that answers the age-old question “what would happen if you placed a guy and a goat in a shopping cart propelled by their terrified screams and force them to traverse deadly obstacle courses”. Can be played co-op. Always read the label. Playable at the Xbox Experience, Microsoft Theater.

The Good Life (White Owls) – Xbox Game Pass
Become Naomi, a journalist from New York City, and pay off a massive debt within the rural British town of Rainy Woods. The only way to pay off all your debt will be to take pictures of the goings-on within town and turn them into reports. This town is famously known as the ‘happiest town in the world,’ but what’s really going on beneath the surface?

The Wild at Heart (Humble Bundle)
Take command of a magical swarm of curious creatures in this story-rich, action-adventure game about childhood escapism. Battle precarious wildlife and supernatural foes, construct and craft new pathways, and discover the secrets of a forgotten world in The Wild at Heart. Playable at the Xbox Experience, Microsoft Theater.

Totally Accurate Battle Simulator (Landfall) – Xbox Game Pass
Experience accurate warfare through the ages in this wacky physics-based tactics game. From the stone age’s spear throwers to modern-day weaponry, TABS uses state of the art physics-based simulation to provide you with never-before-seen insight into our greatest battles of history. May the best googly eyed army win!

Totem Teller (Grinning Pickle) – Xbox Game Pass
Where does a muse go for inspiration? Gather listeners and seek tellers in beautiful, broken places. Retell lost stories or discard them forever. Truth is in the telling. Totem Teller is an antinarrative videogame about storytelling. Lose yourself in a vividly gorgeous, glitchy storybook world. Uncover what lies beneath the folklore. Make choices that define your personal retelling.

Tunic (Finji)
Embark on an adventuresome questabout as tiny fox in a big world, set in that place just beyond the farthest you’ve ever been! Explore ancient ruins, fight monsters, and uncover mysterious secrets. The world is big and scary – so be brave, little one! Playable at the Xbox Experience, Microsoft Theater.

Twelve Minutes (Annapurna Interactive)
A romantic evening takes a wrong turn when a police detective breaks into your home, accuses your wife of murder, and knocks you unconscious. In a heartbeat, you are immediately returned to the start of the evening, before it all happens again and again. A real-time, interactive thriller, where you will need to use the knowledge of what’s about to happen, to change the outcome and break the twelve-minutes loop.

UnderMine (Thorium Entertainment) – Xbox Game Pass
Delve into the UnderMine as a lowly peasant seeking fortune and freedom. Each journey promises challenge, discovery, riches, and untimely death. That’s okay though, because your belongings will be passed on to the next peasant, who will hopefully do a little better. Playable at the Xbox Experience, Microsoft Theater.

Unto the End (Big Sugar Games) – Xbox Game Pass
Follow a father’s journey through an unforgiving wilderness to get back to his family. Unto the End is a 2D cinematic combat-adventure, featuring a nuanced combat system and handcrafted encounters.

Way to the Woods (One Pixel Dog) – Xbox Game Pass
A Deer and Fawn must embark on a journey through an abandoned world of the unknown to get home. A third person adventure game solo developed by Anthony Tan, featuring music from Aivi & Surasshu, composers for the show Steven Universe. Unravel the mystery of Cat Town, evade a hounding pack of wolves, and find your light to explore a world filled with the relics of the old gods: humanity.

Zombie Army 4: Dead War (Rebellion)
Hitler’s hordes are back 4 more in this spine-chilling shooter from the makers of Sniper Elite 4! Sickening occult enemies, wild weapons and a harrowing new 1-4 player campaign await in 1940s Europe, as you fight to save humankind from undead Armageddon! Playable at the Xbox Experience, Microsoft Theater.