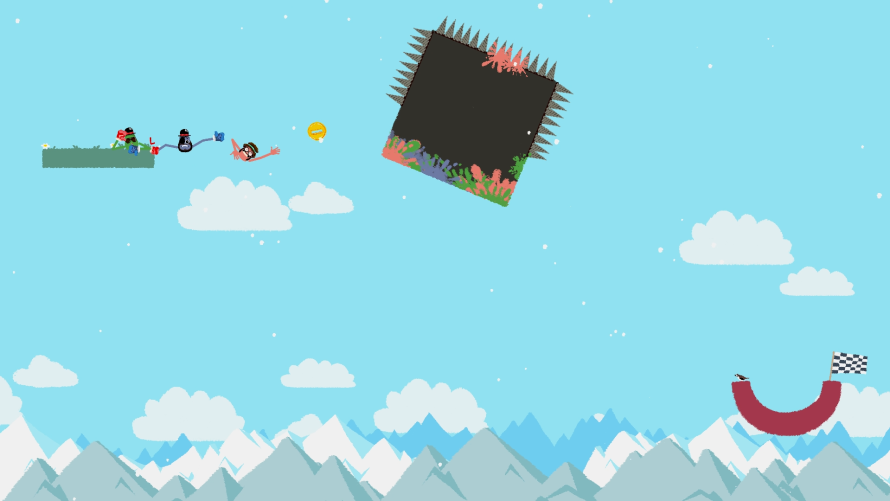 Grabbing other people randomly and being unwilling to let go until they physically force you to is… well, extremely rude and unsettling. Does that apply to video games, or only real life, though? Hard to say, but whatever the case, that is exactly what you’ll be doing in Heave Ho, and let me tell ya, it is an absolute blast!

You do have the option of going at it by your lonesome too, but in my experience, Heave Ho is definitely best when played with one or more friends. I was fortunate enough to convince two such to join me, even though we all knew almost immediately that more time would end up spent messing around than actually working towards clearing each level/world.

Something tells me the game was designed with this in mind, however, as death doesn’t really cost a lot in terms of progress – at least early on. Even during those rare moments when everyone perished almost simultaneously, nothing changed. We weren’t forced to start over, the current level reset, or any such nonsense. Needless to say, this only further fueled everyone’s desire to pursue shenanigans instead of helping with the grabbing, the swinging, the flinging, and the coin carrying. 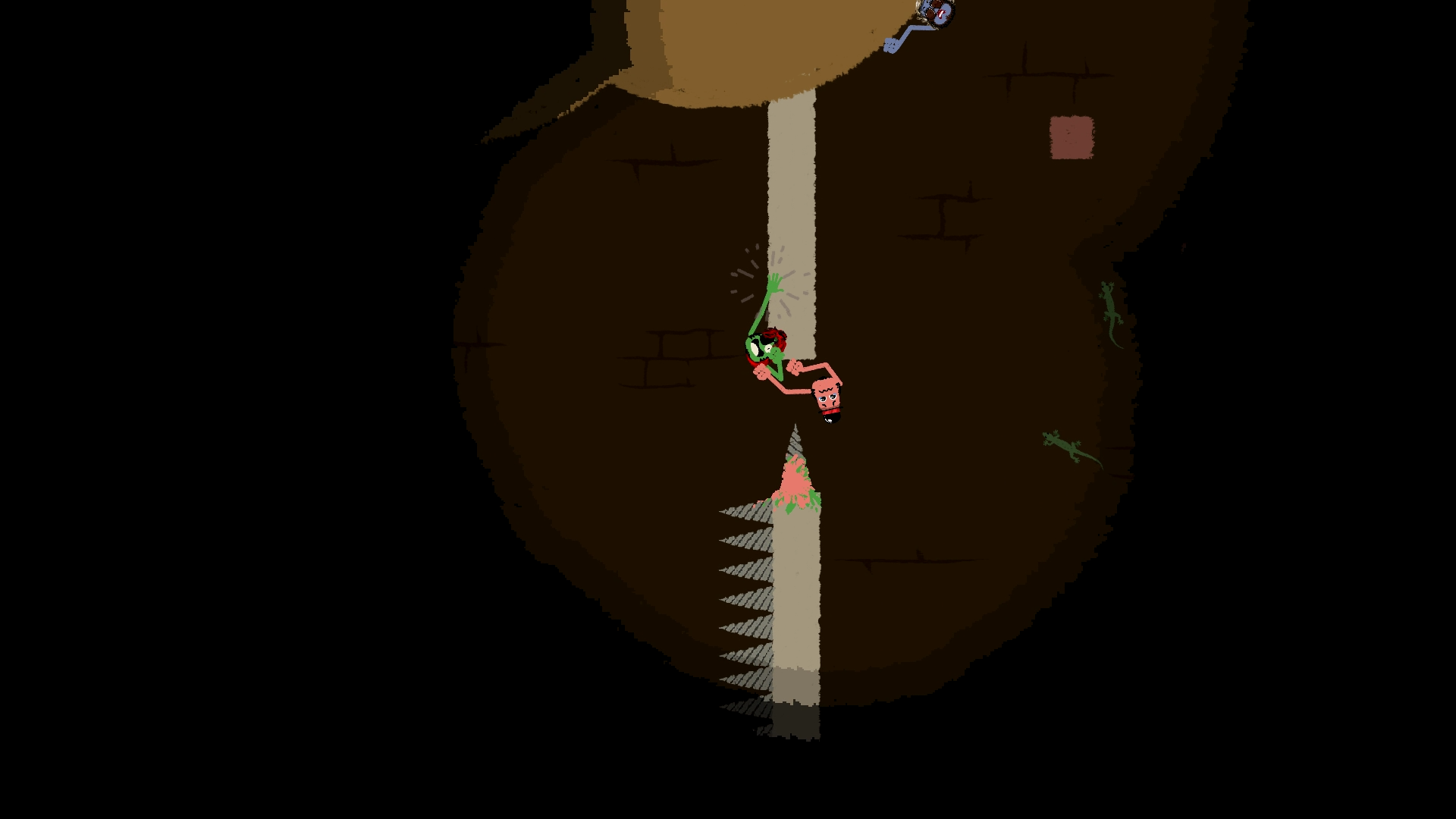 See, the goal in each level of Heave Ho is to reach a rather small half-circle area, marked by a checkered flag. Sounds pretty simple, right? That’s because it is… until you play with 2-3 other people. To say multiplayer mixes things up would be quite an understatement, for not only does bringing friends along spawn an entirely optional collectible in the form of a coin, but it also adjusts the distance between objects in every single level. Which makes perfect sense, given the fact that more people let you cover more ground by, say, forming a makeshift ladder, for example. No really. Just grab hold of someone else and start swinging!

Oh right, I should probably explain how to actually play to help make sense of all the grabbing and swinging. Well, this is another aspect of Heave Ho that truly shines as I’d wager most will have gotten used to the controls within mere moments of picking up a gamepad and stretching those arms. The ones of your character of choice, that is. No motion controls here, thank goodness. In fact, it’s all very simple: holding down the left or right trigger, or both, enables you to latch onto whatever surface is within reach – or, alternatively, another player. Moving your arms, on the other hand, is a bit trickier as this is handled with but a single stick. Kinda. The best way I can describe movement here would probably be to say that your entire body is controlled with the left stick and leave it at that.

While you are being timed, as shown upon completion of a level, there are fortunately no additional requirements to unlock the next level aside from clearing the one prior. I am hopeful that a speedrunning community will form around this game, however, as there is loads of potential for ‘trick shots’ (flinging your character across the screen at just the right angle to basically get a hole in one). Perhaps less so in co-op, but eh, I’m sure someone out there is crazy enough to attempt such a feat. 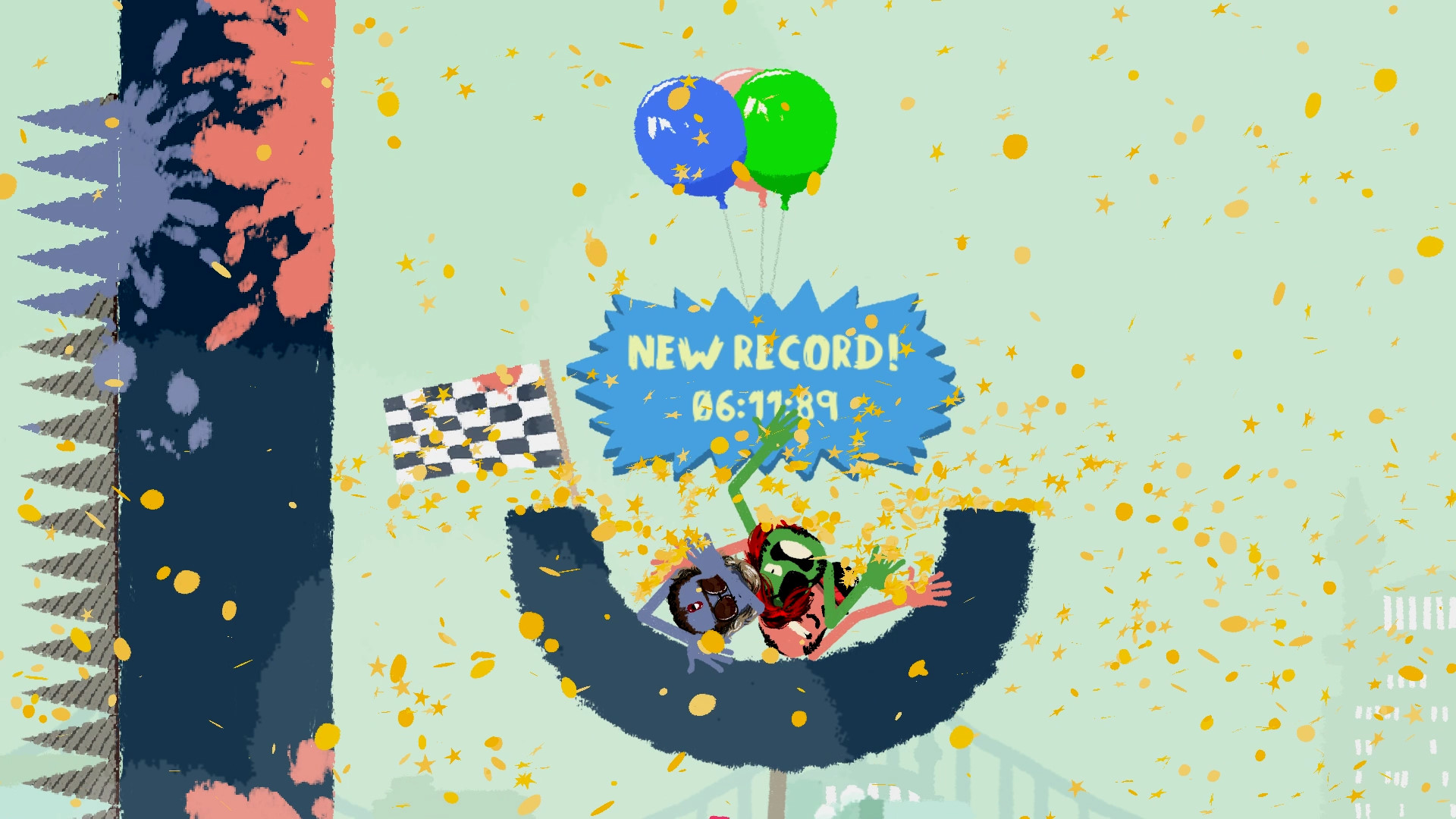 Speaking of unlocking access to more levels – this brings me to one of the very few things I downright disliked: unless you clear an entire set of levels in one session, the next time you fire up the game, you’ll be starting from the first in that set. Not so much that each takes several hours to swing through, as depending on your skill level I’d say most should take less than 30 minutes to finish. Maybe I am making a big deal out of something that isn’t really an issue for most players, but I’d still like to have the level select screen divided into more than just sets (worlds?).

That little nitpick aside, I can not stress enough just how much fun it was to play through Heave Ho as pillar, column, box, circle – heck, virtually every solid object – got splashed with every death. Yes, dying here coats the terrain with the color of your character. Oh, and not just the level itself either – nearby players get a visual makeover too! While this particular mechanic may seem like something silly and borderline useless, believe me, it does serve a rather clever purpose late-game.

As such, even though your character design doesn’t really matter, the only way to unlock more options – some of which are absolutely ridiculous – for customization is to grab that aforementioned coin in each level and somehow bring it to the exit. Doesn’t matter if you’re carrying it or simply opt for attempting the craziest coin toss in history, long as it gets there in one piece. Because much like players, it too will pop and respawn upon coming into contact with spikes or venturing too far outside the visible playing field. 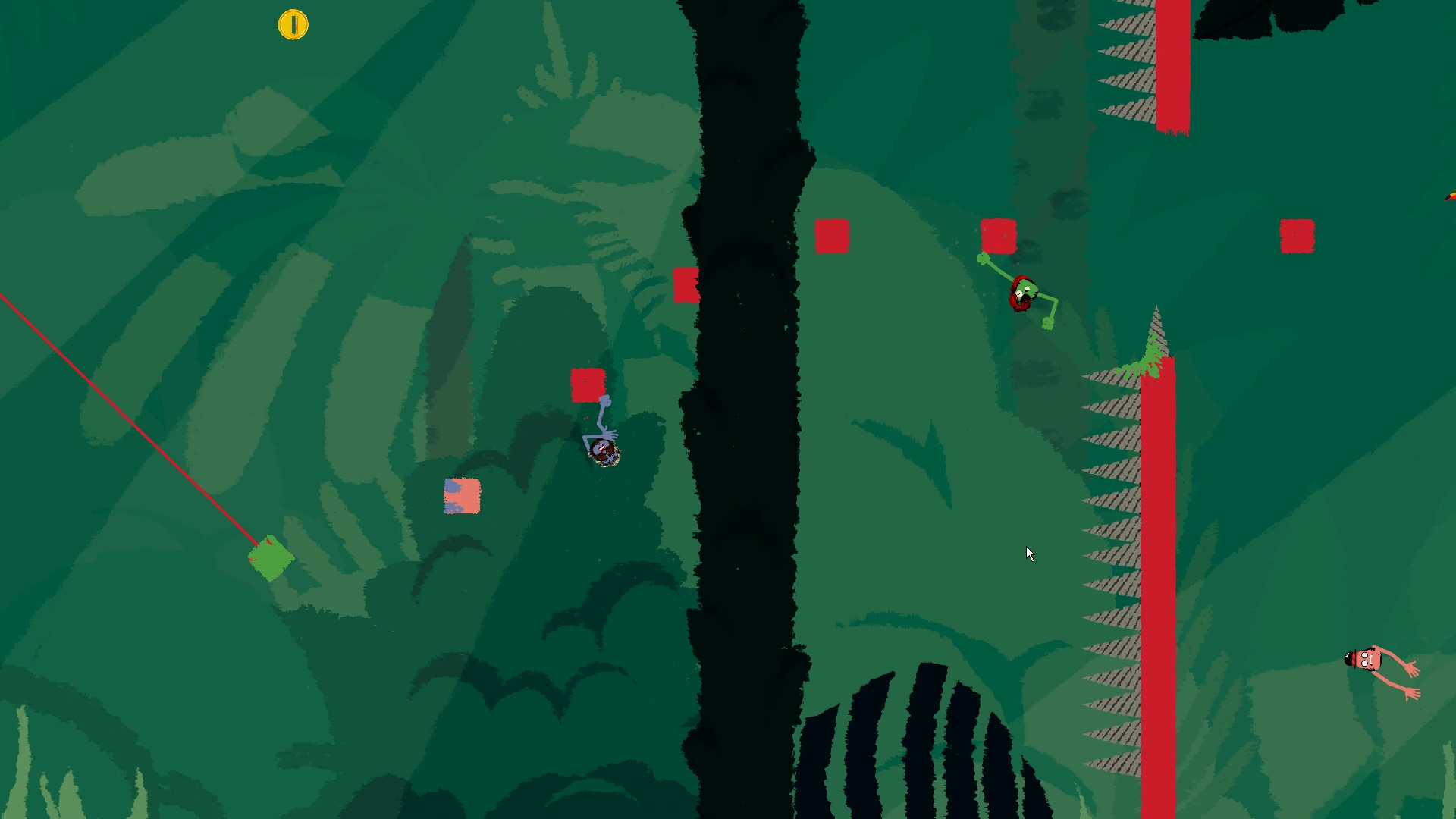 A field which, in some levels, actually shifts to the right the moment someone crosses an invisible line. Generally speaking, I enjoyed these a lot more than the single-screen puzzles (or levels, I suppose – but they really are physics-based puzzles), for one particular reason: checkpoints. You might be wondering just what I am on about here because surely there is no way being able to save progress mid-level is going to make it objectively better than the rest… right? Well, yes and no.

Remember how I mentioned co-op speedrunning? Yeah, checkpoint enabled levels are definitely made for those looking to blaze through Heave Ho with one or more friends as fast as possible. I am not referring to how less progress is lost upon death, although that is obviously also the case. No, what makes these so great for multiplayer is the fact that you can actually use them as mid-level safety nets, flinging your body (which really only consists of a head and two arms, but a body no less) onward, hoping to pass one. After which everyone will respawn there, potentially removing a lot of complicated navigation from the equation. Gotta love it.

On the topic of going fast: completely forgot to mention how you can actually send someone flying by holding down a button to charging up a powerful shove move while simply tapping that same button forces everyone currently latched onto your body to let go. Did I mention how there’s just an absolutely absurd amount of potential for shenanigans here? Sure, we did end up eventually finishing the main levels – or the ‘standard runs’, as it were – but certainly not in anything close to record time, courtesy of much mischief. Not all of which was sourced by me either, although if I’m perfectly honest, most of it probably was my fault. Blame I shall gladly take upon me, for I have zero regrets. Zero! 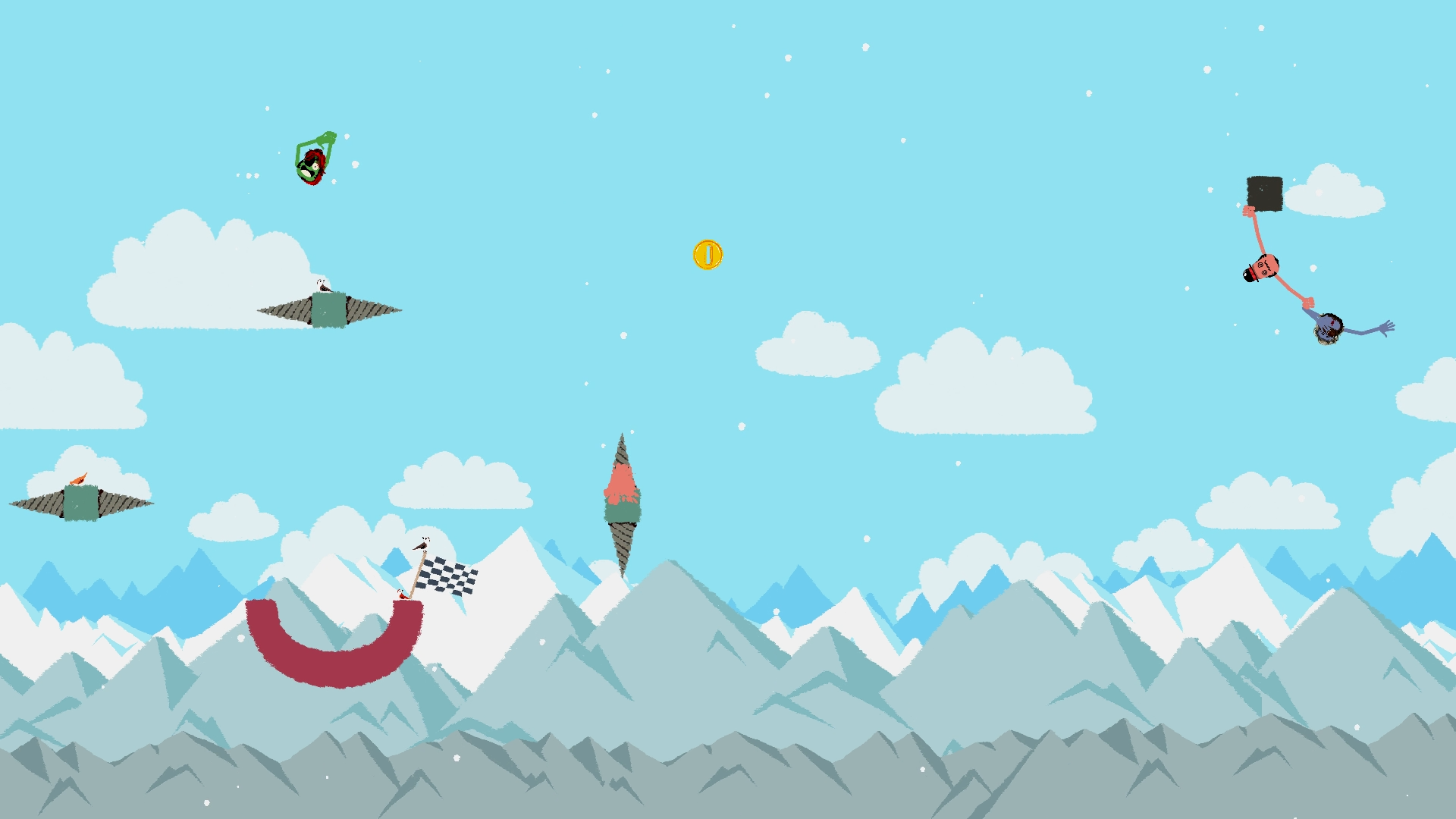 In spite of that, upon getting the Victory (“Finish all the standard runs”) achievement, we did attempt the ‘extra’ levels. Briefly. The first one was cleared after several minutes, but upon seeing the next, we decided to call it quits. At that point, we’d had our fun, and so much of it too. What lied ahead, on the other hand, did not seem like it would provide a worthwhile joy-to-rage ratio. That said, I do appreciate the inclusion of genuinely difficult levels, for I am 100% certain there are those out there who will be playing that lot exclusively after wrapping up the regular co-op content. And it’s not like they’re unfair either, just… very challenging.

As I write this review, after somehow surviving environmental hazards, screen-filling farts, each other’s unwillingness to cooperate, and even sampling the odd bonus stage, I’d be lying if I said I didn’t feel compelled to play more Heave Ho at some point, though. Perhaps we shall even attempt the impossible and acquire the coin in every last level, after which the additional ones await, truly testing our patience? Perhaps. There is something oddly appealing about latching onto one or more of your friends, your life entirely in your hands as you attempt to traverse massive gaps on a quest for fame and fortune. Well, more fame than fortune, as the cosmetics those coins unlock are not only random but won’t really improve your social standing. Unless selfies are your bread and butter, I suppose.

Right. Anyway, I’m sure you’ve noticed how next to no attention has been given to the single-player aspect, and there’s a good reason for that: it’s kinda lacking, quite frankly. I mean, it is worth playing that way, but given the choice, I would always pick multiplayer in this one. Always. Solo feels more like an extended tutorial or a training ground for the real deal – multiplayer. Even if you can only bring one friend along for the ride, believe me, the fun is almost guaranteed. There’s no text to read, no complicated controls to master, just holding, grabbing, swinging, pushing, shoving… and so on. The kind of game that’s great for when you want to relax with a couple of friends on the couch (seeing how there’s no online component), trying your best to convince everyone that you’re not trying to be a grabby weirdo – the game is simply forcing you into that role. And I would have it no other way.