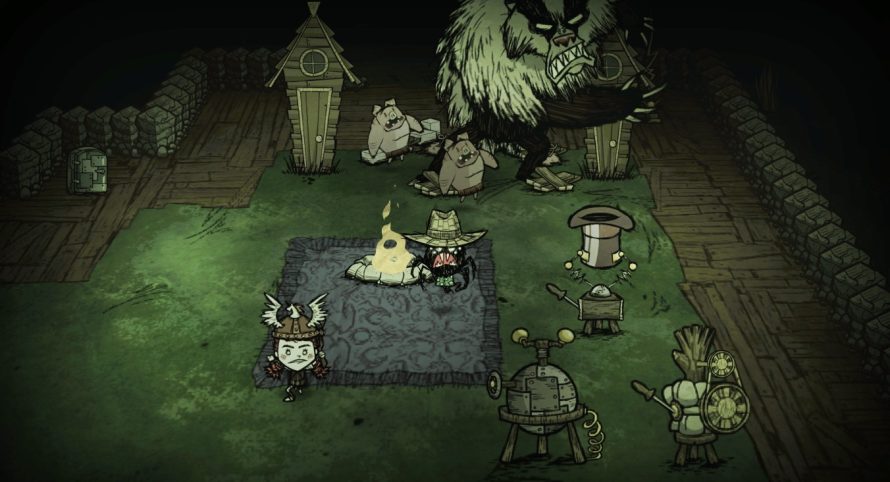 With the most hallowed of eves almost upon us, it is also that gloriously spooky time of year when so many game developers patch in and/or enable seasonal content once more – as is the case with Don’t Starve Together, Hallowed Nights returning for its fourth consecutive year. All hail the mighty pumpkin? You bet ya, and the challenging multiplayer survival goodness got an additional playable character on top of all the candy, hauntingly groovy costumes and… rare drops!

That said, the costumes – much like the candy, I’d wager – are only available during the event. Which makes sense. Who’d want to dress up as a character from classic monster movies year-round, after all? Surely no one is… actually, I wouldn’t mind, come to think of it. But alas, such is the way of Don’t Starve Together, time limited events being just that. You’d be silly to let that stop you from having an absolute blast during, though, so how about I keep this as short as possible? Yeah. I’ll try at least.

So, first and foremost, Hallowed Nights items have an increased drop rate, so get to playing if you want those rather rare pieces and don’t forget to fill your candy bag with delicious treats to the point where dentists are going to absolutely love you for it. Or for consuming the contents, rather. Not that those wicked characters exist in the game world of course, and I for one prefer it that way. Plenty of threats and dangers as is!

Right. Anyway, if for some reason you don’t have much time to spend playing, trying your best to survive in the game’s harsh environment, hey, at least you can still snag the Rusted Scythe simply by logging in. Not bad. On a related note, Hallowed Nights also bring with it new streaming drops, which means… ya better get to watching your favorite streamer if you want those (and who doesn’t?).

The cold wind howls. Trees stand tall and bare, their skeletal branches silhouetted against a broken moon. Gather close children, for these are the Hallowed Nights when ghouls and monsters come out to play… and something has started watching our Survivors from the fog.

Ah, and we mustn’t forget about the addition of yet another playable character – one who just might be straight out of Creature from the Black Lagoon, which is oddly fitting for this particular season: Wurt. Better make sure you’ve prepped some vegetables too, seeing how she has a “particular appreciation for Durians” and hates those fleshy creatures with weird-looking snouts. Not to the point where she might BBQ them, mind you. At least I don’t think so. Who’s to say how far she’ll go to please the Merm King after crafting the Royal Tapestry, providing him with a safe home in this hostile world? An interesting character, to say the least.