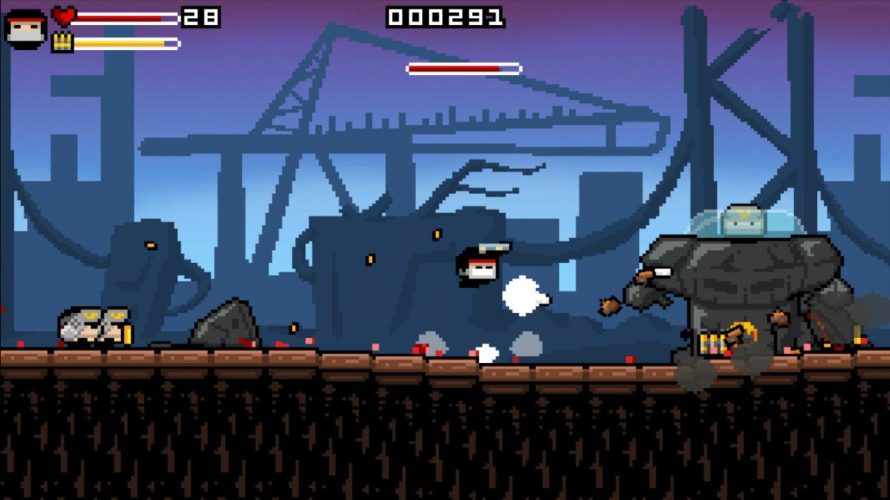 It’s been a few months since I last wrote about Gunslugs 2, and since then, OrangePixel – its creator – has been busy polishing it for release. So much in fact, that they even managed to squeeze in ‘daily challenges’, on top of the procedurally generated campaign that has you taking on the Black Duck Army (yup, again – not the most clever bunch, ya know?).

Like BROFORCE, Gunslugs 2 also borrows from classic movies and 80s/90s pop culture, with over-the-top references, bringing fast-paced 2D run ‘n gun fun. But while the game may not take itself too seriously, you’d better, if you want to… well, you know, save the world. This one ain’t no walk in the park, after all.

If you like over the top action, chaos, explosions, weirdness and don’t take it all too serious, then you know exactly what Gunslugs is all about.

Time for you – the player – to shut down signal towers across the globe, and stop the Black Duck Army from taking over… wait for it… the GALAXY! Well, that’s a step up from the classic done-to-death ‘let’s take over the world’ if nothing else. Now, to help you with this task are a bunch of rocket launchers, lightning guns, automatic guns, dual-wieldable guns, guns, guns, and gunny guns. Did I mention the high emphasis on weaponry? Goes well with the setting, I’d say.

Now, on top of running left and right, blasting bad guys, robots, aliens and whatnot across its 56 procedurally generated levels, a recent update means you also get to take on a ‘daily challenge’, as it were. One life, one level, one day to complete it – nothing too complicated, although everyone gets the same level, meaning that competition’s gonna be present and accounted for. The addition also brings new achievements, so if you’re into collecting virtual trophies, well, best of luck.

Just don’t forget that the Black Duck Army still needs to be stopped, in… Gunslugs 2!