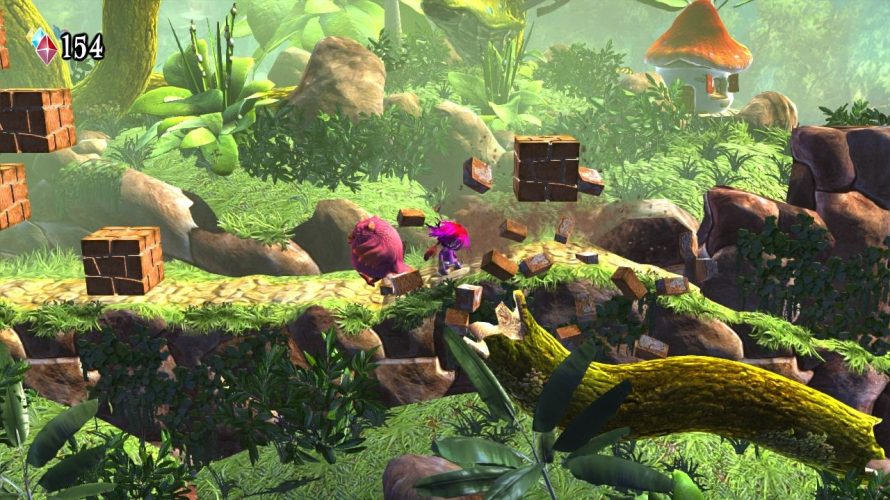 It’s been a long 25 years since the original Giana Sisters game stirred up controversy like there was no tomorrow, with Nintendo labeling it a “Super Mario Bros. ripoff”, but that’s a story for another time (and one most of you are probably already familiar with anyway). Now, Black Forest Games have completely reshaped the classic platformer for modern times with the release of Giana Sisters: Twisted Dreams (GSTS), and hopefully this one won’t rub anyone the wrong way, with its great visuals and a rockin’ soundtrack!

Those who have played the original from 1987 likely still recall how it was mostly about slowly.. breaking.. blocks.. one at a time, and getting past some of the strangest looking enemies, complete with imprecise controls and one of the dumbest endings of any video game at the time. Thankfully GSTS ditches the slow-paced gameplay of the original in favor of a more fast-paced experience with tighter controls and a few twists of its own. These include letting you switch between two different worlds at the press of a button, which also changes the abilities of your character, something you’ll have to familiarize yourself with, to get past certain sections of the levels, and/or to grab those just-out-of-reach diamonds.

I’m aware that technology was far more limited in 1987 when the original came out, but even so, its level and enemy design could honestly have been more varied. In comparison, GSTS mixes things up a lot more, with crazy turtle rides, huge boss battles, and acid pits (hint: avoid them), along with secret passages that contain even more of those shiny diamonds! But there is one thing that the original Giana Sisters had, which is still great after all these years, and that is the music, which was composed by Chris Hülsbeck. Guess what? He’s onboard for this one too, but he’s not alone, as Machinae Supremacy also worked on the music in GSTS, which brings me to a really cool feature: As you switch between the two worlds, the music changes accordingly. One is a more quiet style (Chris Hülsbeck), while the other showcase Machinae Supremacy’s rock talent, and there are even two different versions of the classic Giana Sisters theme in the game. Now I’m sure that a lot, myself included, would purchase the soundtrack instantly, if only they’d actually sell it somewhere, but unfortunately they only made it available through a high level Kickstarter tier.. Put it up on iTunes, Amazon, or even Steam already!

If the popularity of said Kickstarter is any indication, raising $186.158 of $150.000 before it ended, Black Forest Games definitely have a hit on their hands with this modern version of Giana Sisters. During development, it was known as Project Giana, but then a poll on the official website asked fans what they wanted to call it, the result of which was the much more appropriate Giana Sisters: Twisted Dreams.

And that is the name it goes by on GOG, GamersGate (US/UK) and Steam, for $15. I’d recommend taking a quick look at the launch trailer linked below, to get a glimpse at what awaits you in this twisted world..