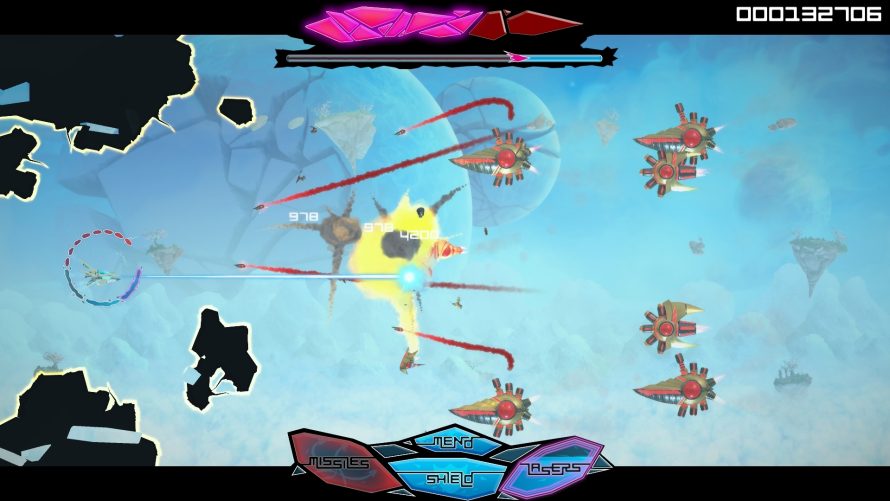 “Find your balance, live a life well played”, they said. Was told I’d get to “explore a world of quick actions, forced decisions, and subtle strategy”. Well, Fragile Equilibrium didn’t quite deliver on either, but at least I got to blow stuff up while fixing a decaying end-zone. Oh, and missiles. Laser beams. Did I mention how stuff blew up all around me?

After reading the above paragraph, some’d likely go ‘that sounds fun!’, and maybe they’d be right. Maybe. Fragile Equilibrium ticked all the right boxes at least: you’ve got a shield, missiles, a laser… and unlimited bullets. All of which are used to… wait for it… blow stuff up! Oh, and then there’s that ever-expanding area near the left side of the screen. You’ll have to get rid of this by, well, ‘lasering’ it away, as otherwise it’ll continue to grow, eventually TAKING OVER THE WOR – ahem. I mean, fill up the entire darn screen. I think. Never did let it reach that point.

Right. Anyway, while the weapons – most of which recharge by removing the black area/stuff (what is that thing called anyway?) – get the job done, laying waste to enemy ship small and large alike, the game is not without problems. And the by far greatest of these is the reason for me never making it past the second level (of four). See, as fans of the genre knows, if there’s one area that has to just work in a shmup… it’s the controls. In this one they don’t. Unless you like overly imprecise movement, which only serves to increase the challenge in the worst way.

Built upon multi-layered interactions, a Wabi Sabi aesthetic idealism, and a rich, broken world of yesterday’s fantasies, [FE] asks the player to reflect upon their play, their world, their nostalgia, and themselves.

Not thereby saying the game is unplayable, but it does make the whole thing noticeably less enjoyable. That said, perhaps the floaty controls are actually intentional? I honestly couldn’t tell ya though, although seeing how every other side-scrolling shmup I’ve played had perfectly smooth ship handling… why, Magic Spell Studios? Why? All I wanted was to have some fun, blow stuff up and… find inner peace. Sadly, all I ended up with was an experience more frustrating than fun to play. Lovely music though?

Fragile Equilibrium is available on Steam and itch.io, for free.