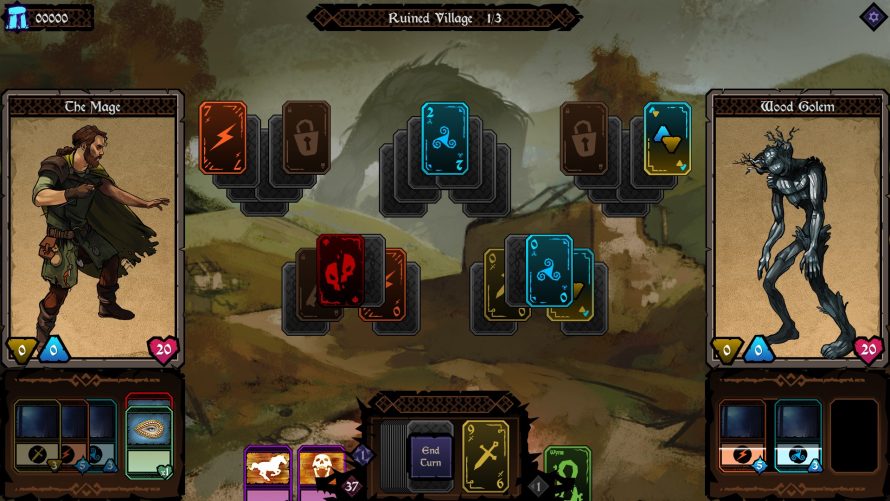 Alright, I’ve got both good and bad news. The bad news is that in Ancient Enemy, well… evil has already won. How’s that for a grand, dramatic way to kick things off? Oh right, there’s also good news. Kinda. I mean, apparently all is not lost, as you do get to duel “a cast of deadly enemies” in an attempt to grow powerful enough to vanquish the greatest of them all. With cards. So many cards.

That said, as you can probably tell from the above screenshot, you won’t be duking it out against the undead (and other nasties) Magic: the Gathering or Hearthstone style, a unique twist on Solitaire crashing onto each battlefield instead. While not the most original concept ever, it got the job done in Shadowhand – another Grey Alien Games creation – so why reinvent the wheel for Ancient Enemy? If it ain’t broke, and all that.

You will explore a lost landscape through dozens of atmospheric levels, draw power from the Earth itself, and use your abilities to duel gruesome enemies in unique solitaire-style turn-based combat!

I suspect plenty of changes have been made to the core gameplay though, Shadowhand featuring a completely different setting and all; (archaic) guns and blades replaced by mystical powers in Ancient Enemy, among other things. Whatever the case, plenty puzzles await as you attempt to survive this here “dangerous, folkloric story”, eventually reaching the locale of that big ol’ nasty boss to end his reign of terror once and for all. Hopefully.

Ancient Enemy will be on Steam, come February 14.