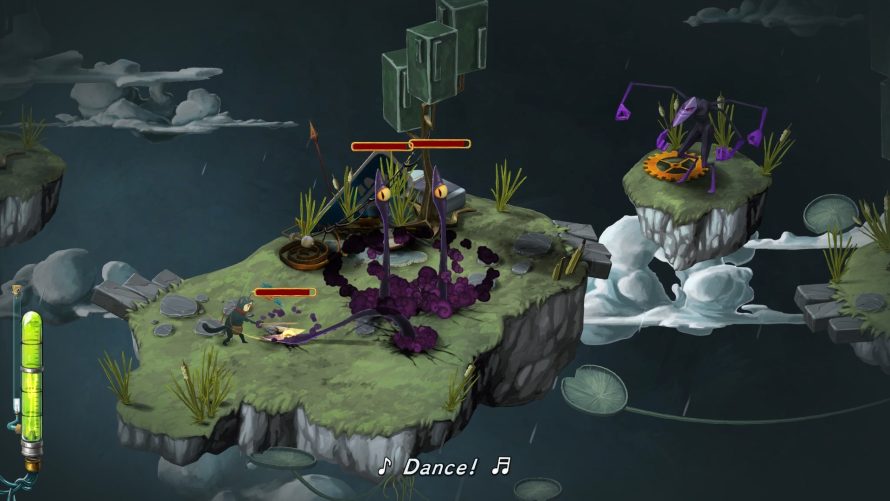 In most cases, courage is not easy to find. Perhaps that is why its strength as a driving force, enabling us to do what we otherwise simply couldn’t, is so great? That’s the case in Figment at least, a game which has players directly influencing it through Dusty, the (former) voice of courage, faced with the task of acquiring… well, peace of mind.

See, for the longest time, the mind – which also serves as the world in which Figment takes place – was quiet, calm even. But then something happened. Something terrible. Something that brought about new thoughts and emotions, and with them, nightmarish creatures have begun emerging all over the place. Fear, dread and despair follow wherever these uncanny beings roam, so they must be stopped, no matter the cost.

That’s the scope of the situation at least, but early on, Dusty actually couldn’t care less about anything but chilling in his rocking chair with a drink. Come to think of it, if not for someone deciding to remove his drink (among other things), the whole plot would never have come to exist. So good on whoever/whatever got things started, rushing Dusty off on a grand journey through the wondrous landscapes of a genuinely troubled mind.

Many an odd pencil bridge was traversed, boxes moved about, nightmares smacked and puzzles solved, by the time the credits rolled on this peculiar tale of recovery, perhaps even self-discovery. But as always, let’s take it from the top, where we find two unlikely heroes trying their best to come to grips with the dire situation. One involving the vanquishing of stuff nightmares are, quite literally, made of. 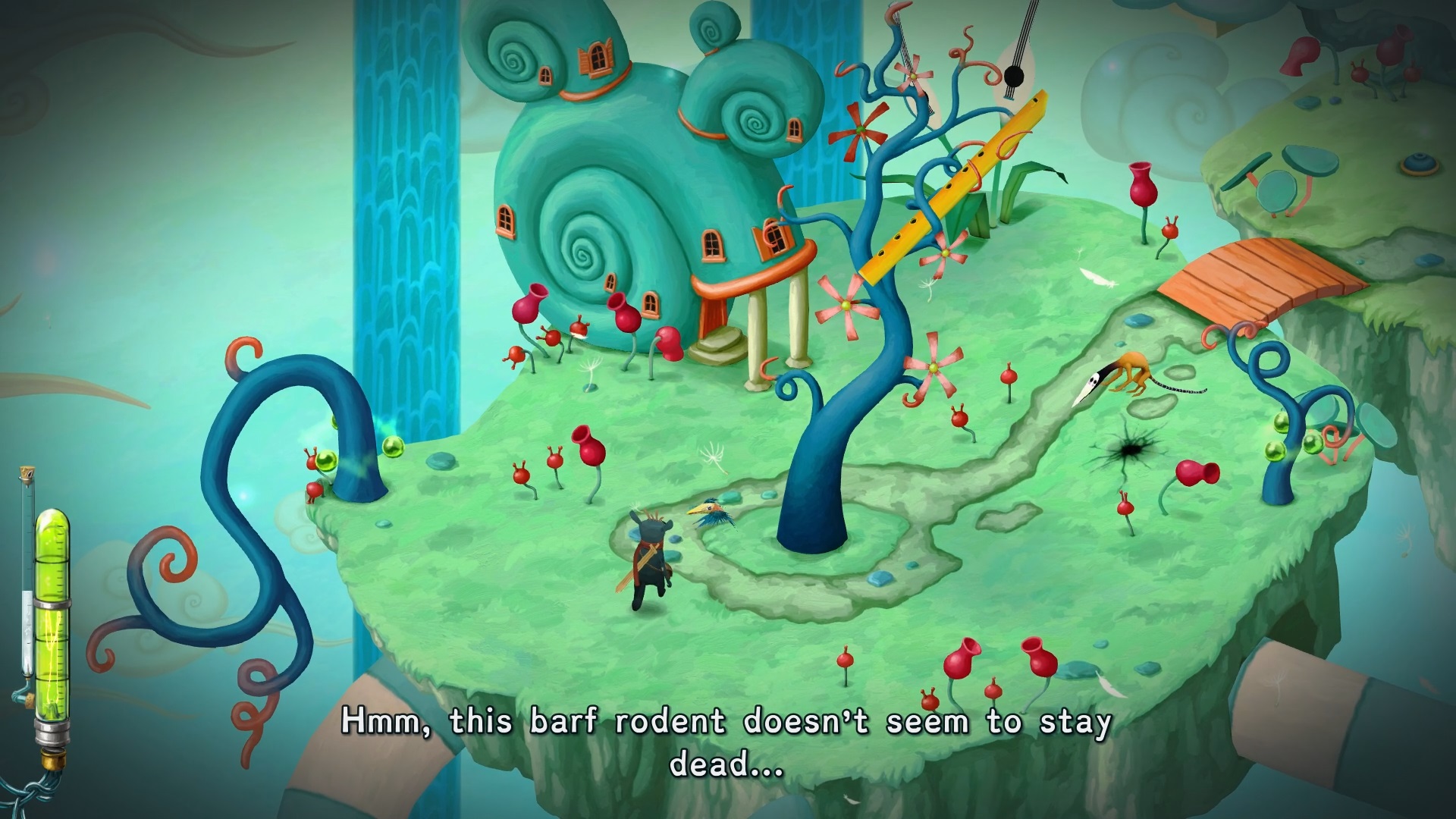 Fortunately for the player, Dusty’s overly cheerful, feathered friend Piper is there to not only provide helpful hints but also lighten the mood with puns on par with those provided by Dusty at times. Times which are, for the most part, rather grim and seemingly without hope for improvement. Until the player starts smacking spiders and tentacle alike with a sword far more powerful than it looks, that is, reshaping the environment one puzzle (often with a battery or two involved) at a time.

Much like how a lit lightbulb is used to showcase the appearance of a new idea in cartoons, shuffling batteries between same-colored devices in different locations opens up access to different areas in Figment. As players travel between different parts of the mind, each with its own unique look and feel, these seemingly simple puzzles are expanded upon with additional items like seedlings and gears; some of which can even be moved around freely, much like the batteries. It never quite reached the point where I felt the need to look up a walkthrough, though.

Or that’s what I wanted to say, but alas, near the finale I found myself resorting to screenshotting a specific puzzle built around memorization instead of, you know, memorize it. Would I consider this an act cheating? Not really, and it was either that or likely being stuck longer than I would have liked, potentially abandoning Figment; and after all I had experienced at that point, quitting was simply no longer an option. 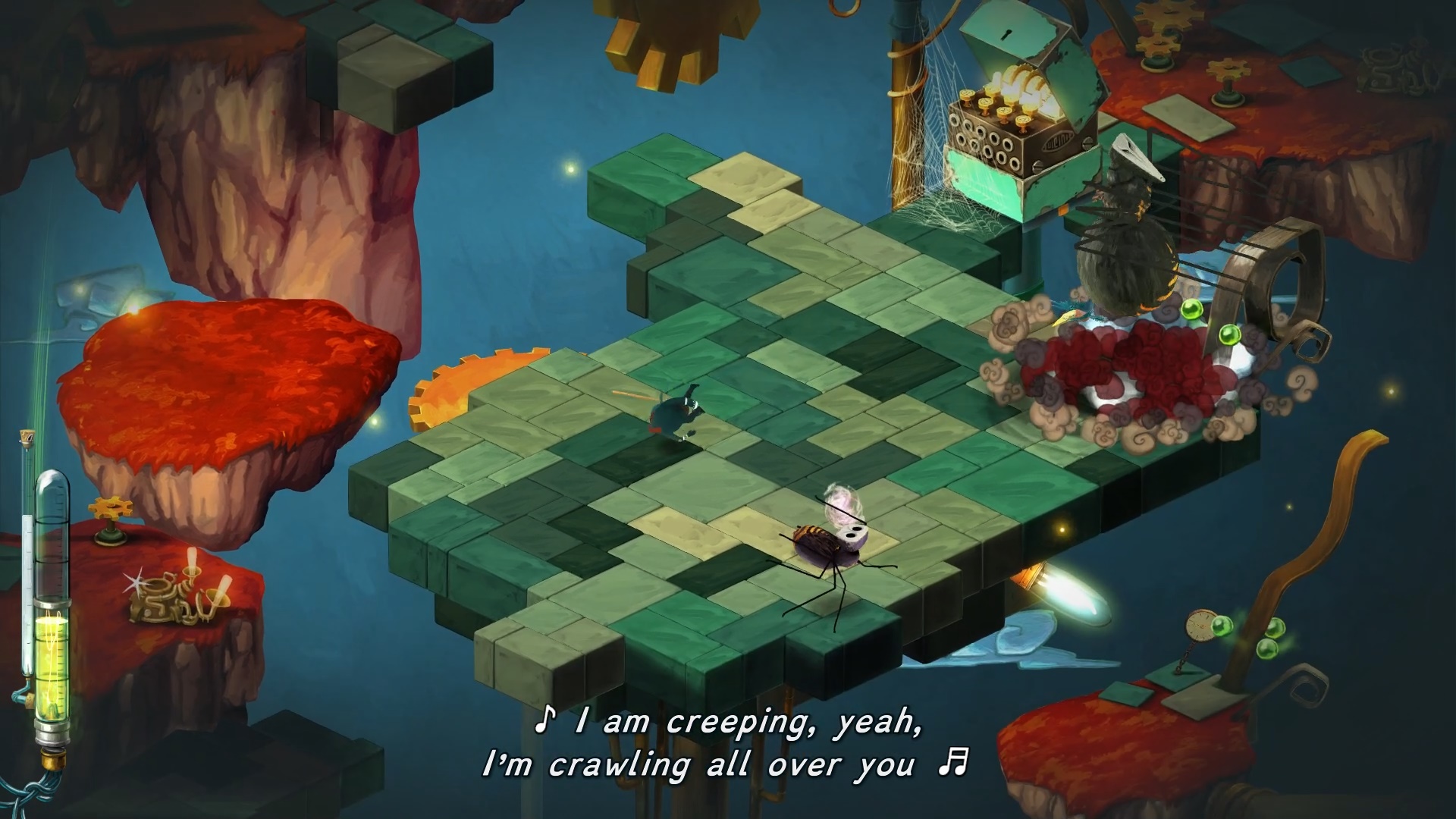 I wanted to see how this tale of musical boss battles, gassy nightmares, bad puns, and acid vomiting misshaped creatures was going to end… and so I did. But there’s so much more to share with you about the game before we get to the end – which wrapped up everything quite nicely, I might add – so let’s back it up a bit.

At the beginning of Figment, I was certain that the aforementioned pencil bridges were about as weird as it would get. I’ve rarely been this glad to be proven wrong about something in a video game before. That is not to say things ever got near Alice in Wonderland levels of strangeness, but there were moments when I felt like I had stumbled through the looking-glass: giant clocks, cogs and the most peculiar train(?) I had ever seen were soon joined by a variety of instrumental contraptions. Truly a game unlike any other, and an undeniably better experience because of it.

If only I had found every aspect as enjoyable as the quirky world and its inhabitants, chances are this review would be without more than a smidge of negativity. That was not the case, however, as late-game areas brought about a new mechanic that I didn’t care much for – one that ended up getting me killed more than even the most fierce boss battles. Had I been the more patient type, this particular hazard would likely have proven far less, well, hazardous (or in other words, your mileage may vary). 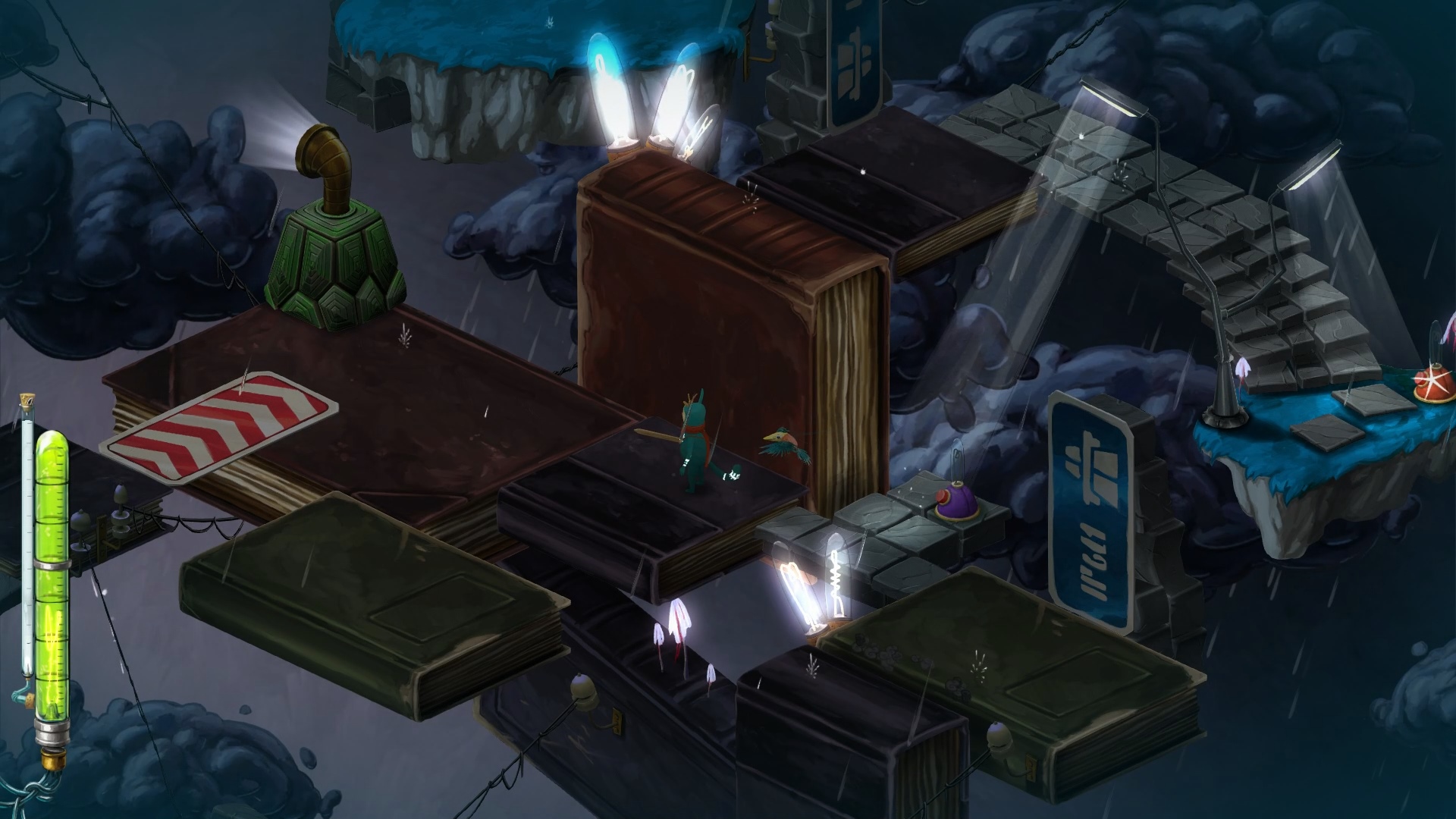 Speaking of which, looking back across the five or so hours it lasted, I don’t recall a situation which could not be described as a puzzle of some sort. Even regular battles could not simply be bested by Dusty slapping them with his sword, after all, certain creatures needin – okay so I’m exaggerating quite a bit here. They’re actually all quick and easy once you know how to deal with them. Not quite the case with the various boss battles, as these required a fair amount of thinking and planning to survive. All while listening to them… sing.

Not that I didn’t enjoy their musical performances, but I did find it a tad distracting as I was busy trying to roll out of harm’s way, reaching whatever object in the area I needed to be able to damage the fiend again. These were very much puzzling obstacles to overcome, which was a nice change of pace from the usual ‘hit until dead’ encounters sprinkled throughout the world/mind. Catchy lyrics though, and solid voice acting across the board, even if expected Figment‘s main villain to sound, well, different. Dusty and Piper, on the other hand, were spot-on, which certainly didn’t hurt the experience, seeing how chatty those two were.

In fact, while playing, I was quite similar in that regard, commenting on most things as I wandered through the mind (some might even say I was being mindful) in which Figment takes place. Were I not playing through it for review, I might even have done the backtracking required to gather every last memory (aka. collectible). But that’s what happens when you – or I, at least – play a game determined to write about it upon completion. 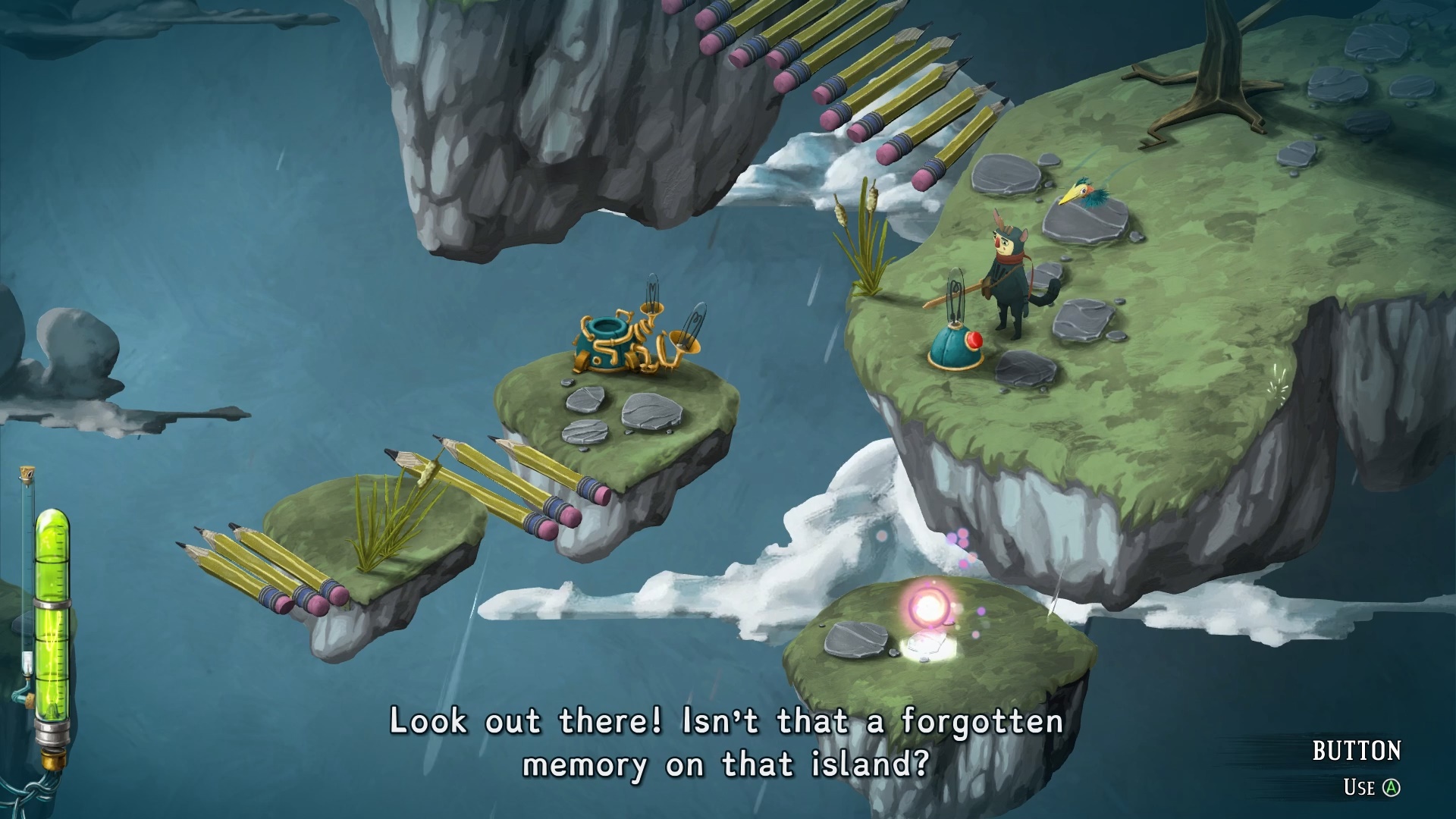 Straying from the path too much is not really ‘allowed’; unless of course, you plan on writing something more in-depth as your average review; a critique, perhaps? This is not one such, however, and so only a few memories were gathered by the time the credits rolled and words started forming on the screen for what you are currently reading. But enough about that. It’s time to wrap this one up before it spirals completely out of control, twisted into something totally unrelated to the game at hand.

So, going back to the beginning… courage! The beginning and end of Dusty and Piper’s groovy adventure, really, and I shall refrain from spoiling exactly what I mean by that. You’ll just have to play the game instead, and honestly, you’d be missing out on something special, were you to pass on Figment. It might have its flaws, some are bound to find both puzzles and combat a tad basic, and the music likely won’t appeal to everyone.

In spite of those potential issues, I’d still strongly recommend experiencing what the game has to offer; or at least giving its demo a go if for some reason you are not convinced of its worth after reading this review.

Figment is available on Steam (reviewed), GOG.com, Switch, and PlayStation 4 with a $19.99 price tag.