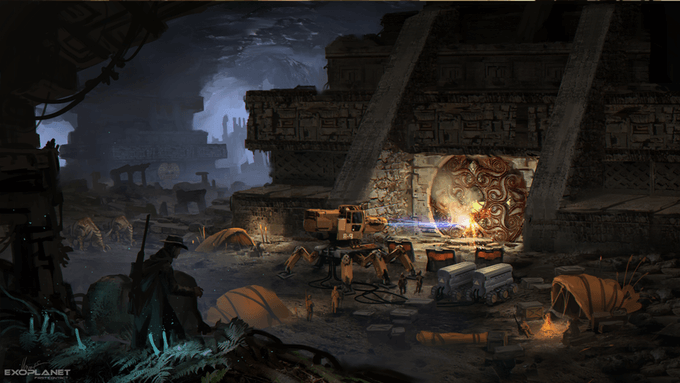 Meet Jack Sharp, anti-hero, adventurer extraordinaire and Exoplanet: First Contact‘s protagonist. Jack has had the bad luck of ending up stranded on K’Tharsis, a former mining outpost turned survival-of-the-fittest, as the Antigravium Crystal rush has come and gone. But his luck could change for the better, with a little careful planning, some gunslinging and the right allies. Never say never, in this sci-fi ARPG with an old-school western twist.

With every decision changing K’Tharsis in some way, you’d best think before you act; unless of course, someone’s already drawn their weapon and is trying to line up a shot, in which case… shoot to kill. Just remember that pretty much everything you do has consequences, for better or worse. Choose to help someone acquire weaponry for instance, and you could very well find yourself at the wrong end of it days later, paying for your kindness. Are you a fighter, a diplomat, or something in-between? Your character, your call.

That said, Exoplanet: First Contact is just the first chapter of an episodic saga, and while I generally prefer getting a complete game instead… in this case, it might be the better option. See, the alternative would be waiting several years for what Alersteam have in mind, and really, no one wants that, so episodic it is. Oh, and once the finale arrives, as will modding tools for the game! Groovy.

Through the Kickstarter platform we are collecting the funds to be able to enter Early Access on Steam in 2016 where it will then receive more attention from passionate RPG games.

While still looking for funding, Exoplanet: First Contact has made it through Greenlight already, so that’s one hurdle overcome. Next up, acquiring the remaining $18,634 to make its Kickstarter campaign a success, prior to September 12, 2015. Should be doable, I’d say, and at least large parts of the game have been completed already, meaning… this is far from another concept crowdfunder. I’m sure you’ve seen at least a few of those. Anyway, what say we get this one kickstarted, eh?