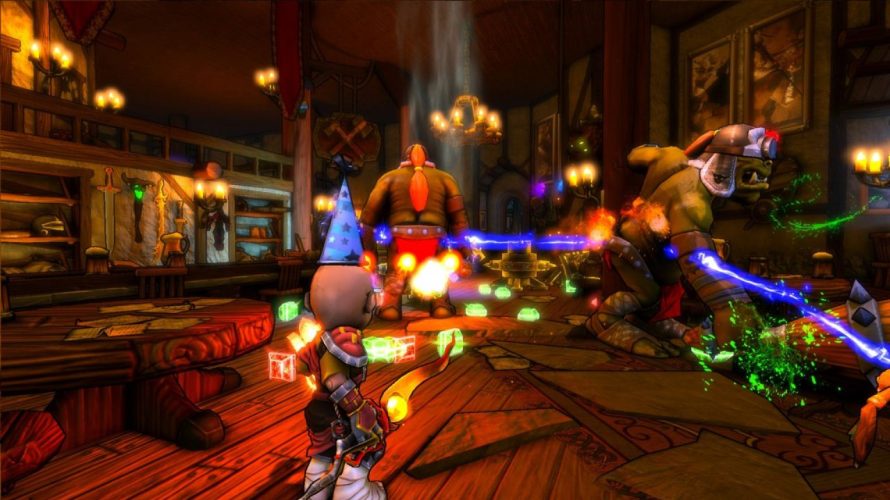 For the few people who have yet to experience Dungeon Defenders, it’s a third person action-oriented tower defense game, with a bunch of RPG elements thrown in for good measure, and it has a completely ridiculous amount of content, even without all its DLC. Plus, there’s both online and split-screen co-op and a story… kinda. I guess. But the action and glorious battles definitely overshadow the plot here, and I say the game is better for it. There are hardly many who pay attention to the story in a tower defense anyway.

Even though I really enjoy Dungeon Defenders, the Anniversary DLC is only free until October 30, so instead of spending more time talking about the game itself, let’s look at what the latest DLC adds:

Alright, so there’s a new mission, party ha.. wait, WHAT?! Tavern Defenders mission? Wow. Well, that certainly makes the DLC worthwhile. No more defending the crystal in some far-away land nonsense, which is how it usually is, but instead.. an actual tavern battle! Who cares about party hats and a new design for the Crystal Core? A kobold on a treadmill does sound hilarious though, but it kinda pales in comparison to defending the actual tavern for once. Kobolds, goblins, orcs, ogres and whatever else might be heading for the tavern, better be at the top of their game, because Etheria’s heroes are more than ready!

So.. don’t forget about the Anniversary DLC, eh? You’re gonna need the game itself to use it, though, but at least it’s still 75% off for about 11 hours, at the time of writing. Why are you still here? Etheria isn’t going to defend itself (though sometimes I wish it would)!