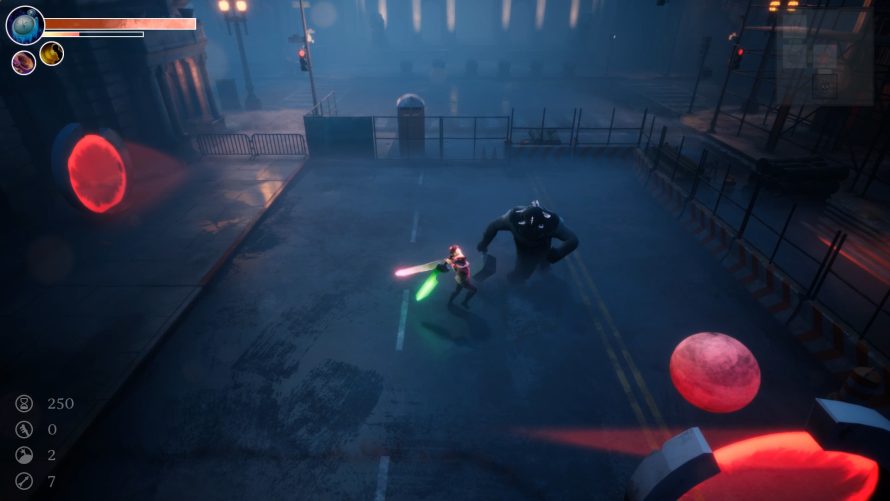 In the real world, the norm is to work during the day and get a good night’s rest, repeating the process as the moon gives way to the sun. Dreamscaper does things a bit differently. Here, daytime is spent forging friendships to grow stronger and assist you when sleep beckons. Because dozing off in this game means duking it out with the most surreal of nightmares! Oh boy.

To further complicate things, permadeath is a thing, although not really in the classic punishing format, so much as… well, simply put, dying wakes you up to another day of chatting, friendship forging, ability unlocking, and all that good stuff. Ain’t just about slugging it out with otherworldly baddies, night after night, either. The reason for Cassidy, Dreamscaper‘s protagonist, going to all this trouble is that delving into her subconscious and dealing with all these nightmarish scenarios is the only way to “save her from a dark fate”, as the developer, Afterburner Studios, puts it.

Adventure through beautiful, haunting dreams to discover untold secrets, vanquish nightmares, and upgrade your gear all while uncovering Cassidy’s story as you plunge through her subconscious.

While seemingly rather weak and not really capable of kicking some serious you-know-what as the game starts, over time, Cassidy will acquire elemental manipulation abilities and other fun superhuman powers, including the ability to control time itself. Groovy. Bet ya that involves a lot of repeated cycles of sleeping, dying, waking, but eh, nothing ventured, nothing gained! Besides, while skillful play should be able to get ya far, the more powerful Cassidy is when going up against the likes of Isolation, Fear, Negativity, Loss in grand ol’ boss battles… the better her odds. Obviously.

All that said, Dreamscaper is an unfinished product, with an estimated exit from Early Access in 6-12 months. A lot of content does seem to be in the current build, however, according to this list from its Steam page, so those picking it up now instead of waiting have a fair bit to sink their teeth in. A nice change of pace from every other Early Access title that looks to be in pre-alpha, barely anything working if the game will even start. So, who’s ready to… dream?