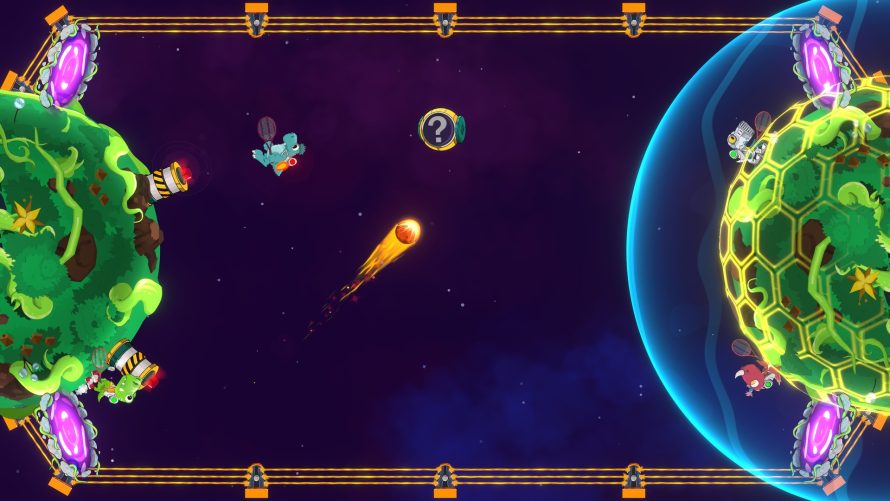 Like a blast from the distant past, dinosaurs have ventured into the depths of space, and are now… playing tennis. Huh. Oh, and matches take place between two planets with crazy power-ups, making this more akin to something like Mario Tennis than your typical simulation take on the classic sport. A feat almost guaranteed to increase the fun factor of Dino Galaxy Tennis.

There are story bits to be found in single-player too, in case you, for some reason, need another reason to play tennis in space as a dinosaur. Yeah. Anyway, winning the Galactic Tennis Tournament is the dream of our young(?) would-be tennis star, but to even qualify for the finals, a total of five badges must be acquired by defeating the leaders of – unsurprisingly – five different planets. In tennis matches. Tennis. Tennis! TENNIS! Ahem.

But while you can bring a friend along for some co-op fun or due it out in 1v1 or 2v2 matches, it’s not all about tennis, strictly speaking. I know, what a twist. A variety of challenges for honing those ball (and brick, as it turns out) smashing skills await those looking for something even more different from the norm than, you know, dinosaurs playing tennis between planets. For a bunch of long-since extinct creatures, they sure know how to have a good time. In space. With tennis. Dino Galaxy Tennis.

Dino Galaxy Tennis will be available on Steam come March 19, 2021.