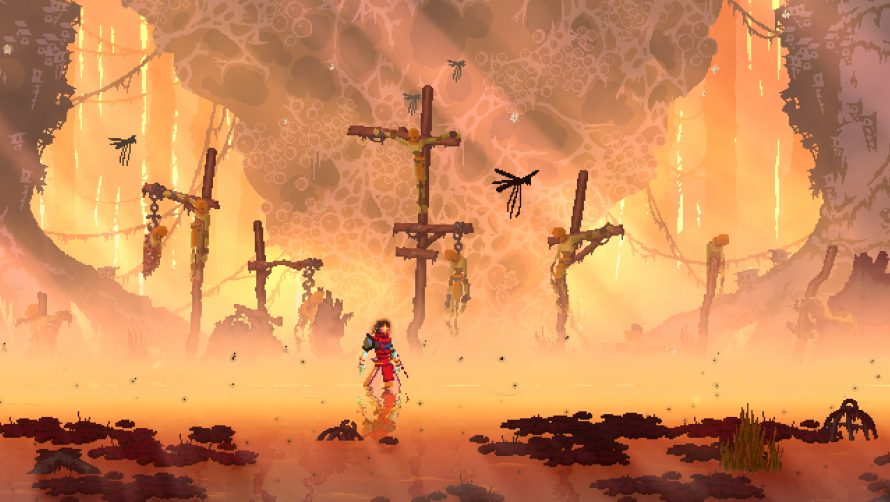 At this point, Dead Cells is undeniably one of those indie games that require no introduction. If you don’t own a copy or have at least heard about this absolutely stellar action platformer, well, you’ve been living under a rock. There’s really no other way to put it, and based on that recent reveal of its first piece of premium DLC, The Bad Seed, it’s only going to get bigger. Bigger and better. Much bigger and much better.

Even though I have only scratched the surface of what the game holds, still struggling with the second ‘tier’ of its multiple difficulty levels, enough has still been laid before me to form an opinion. A very positive opinion. One that will, hopefully, continue to grow in that direction as I traverse The Arboretum (The Courtyard (aka. Promenade of the Condemned?)/Toxic Sewers alternative) and The Swamp (The Ramparts/Ossuary/Ancient Sewers alternative), a trip that will culminate with a boss fight in The Heart of the Swamp, one “designed to be on par with The Concierge”; you know, the bulky armored dude in Black Bridge. I am not entirely certain which of those areas the above screenshot is from, but it just looks so darn groovy, ya know?

Oh, and even better: with new arenas come deadly new enemies, and – based on that “Harvest a few souls with your new scythe.” snippet from the DLC’s Steam page – new equipment! Interestingly enough, a quick search on Google reveals multiple requests for exactly this weapon across Reddit and the Steam forums, which means… here’s a developer that gives a damn about what its fanbase wants (something the staggering amount of free content, hotfixes, balance changes, etc. also proves – but that’s a story for another time). Did I mention… new weapons? New weapons!

Explore a relaxing Arboretum, wade through a noxious Swamp and take on a new boss in this new early game content designed to expand the Dead Cells universe and add variety to runs for people who want to support the development of the game.

Exactly what else we can expect from The Bad Seed remains to be seen. I am already more than a little excited though. For starters, the prospect of even more alternative early-game paths is going to be a really nice improvement, no matter the amount of time one has spent in the world of Dead Cells. It is after all not some grind-heavy unlock or late-game thing, instead, something everyone will be able to experience, no matter their skill level. Well, provided they manage to stay alive long enough to find/reach the proper exit(s). That’s kinda required.

Note: Yoann Laulan’s Bandcamp page is the place to go for all your Dead Cells (digital) soundtrack needs.