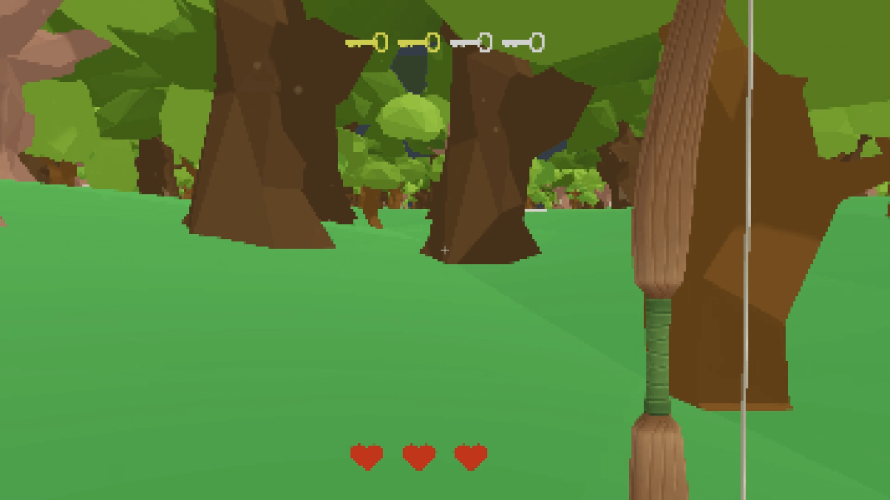 Bow in hand, armed with an unlimited supply of arrows (because why not?), it’s time to stop a pesky spirit in Dark Forest! But before you can even fight it, four keys must be collected, after which a trip through the Dark Realm gate is to be made. Sounds simple enough, right? Well… each key resides in its own realm, none of which are easily accessible.

That said, you already have enough arrows to take down entire armies (in theory, as I’m sure most would simply overwhelm you), so what’s a little key hunting? As it turns out, these realms are only accessed by inching ever so closer to death, one injury at a time. Oh, and not just that… but with each hit, one of four hearts is lost, and the entire world will change, sending you back in time as it were – at least in terms of visual and audible design.

On top of all that, you’ll have to survive a never-ending onslaught of flying skulls while searching for said keys, and this – surviving – is by far the trickiest aspect. Finding the keys isn’t all that difficult, even if it can be quite easy to lose your way amidst all those similar-looking trees. But once you’re down to a single heart, at which point I believe the final key can be acquired, you’ll be wandering a low-res black and white forest. And the skulls, for some reason, have no problem navigating this, making me think the change of scenery doesn’t affect them as much as you. Not fair!

Try as I may, that final key kept eluding me as some random enemy would fly in from behind, sending me on the fast-track to a game over – in spite of my actually hearing it coming from quite a distance. Challenging, to say the least. Ah, did I mention how the entire thing came to be in a single month (or less than 10 days, according to its creator), during Game Off 2017? As such, while it’s hardly the most varied experience ever, there’s still fun to be had. But hey, don’t just take my word for it. Grab a bow, nock an arrow and send it flying towards the nearest skull, in Dark Forest!

Dark Forest is available from itch.io, without a price tag.