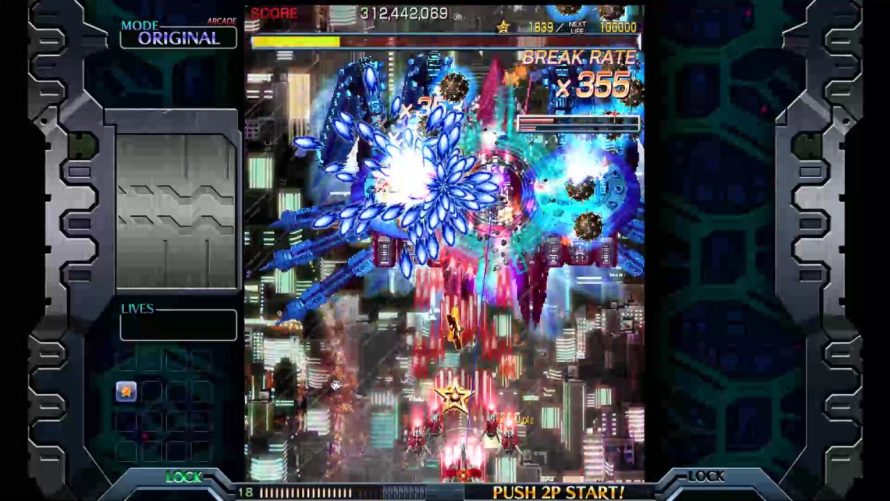 What’s better than numerous enemies filling the screen with bullets in a SHMUP? When you return the favor! And that’s just one of many reasons as to why Crimzon Clover WORLD IGNITION is such a great game. Fill your ‘break’ meter and at the press of a button, you’re able to ensure the untimely demise of just about everything coming at ya. Not enough? Well, with enough skill, you can actually double the ridiculousness, triggering DOUBLE BREAK(!) mode, at which point I’d wager nothing will be alive for long. Save for those pesky bosses, of course. Shoot to kill!

Oh, and you know what else is pretty darn ridiculous? Arcade difficulty. At least compared to normal, in this game. It took me 38 minutes to down the final boss, during which I was asked if I wanted to continue no less than 34 times, averaging almost a game over pr. minute. Ouch. Then again, I’m hardly the best there ever was, or will be, at this particular genre. Quite the opposite in fact, even if my experience with SHMUP games does date all the way back to when Galaga was still in arcades. Yup, I’m that old.

That said, in spite of lacking the skill to finish the game like an absolute badass (without using any continues), I still had a ton of fun. So much in fact, that after the credits were done mocking me for not finishing the finale on a single continue, I went back to try ‘boost mode’. A mode where everything – difficulty, bullet density, bullet speed and probably other factors – varied depending on my skill level. Suffice to say, this one was a lot easier than arcade… at first. But once the game caught wind of how I wasn’t completely terrible, I’d say it pretty much changed to arcade level difficulty again. More or less. Sure was fun to have unlimited ‘break’ though, even if I couldn’t quite figure out how it was triggered in boost mode. 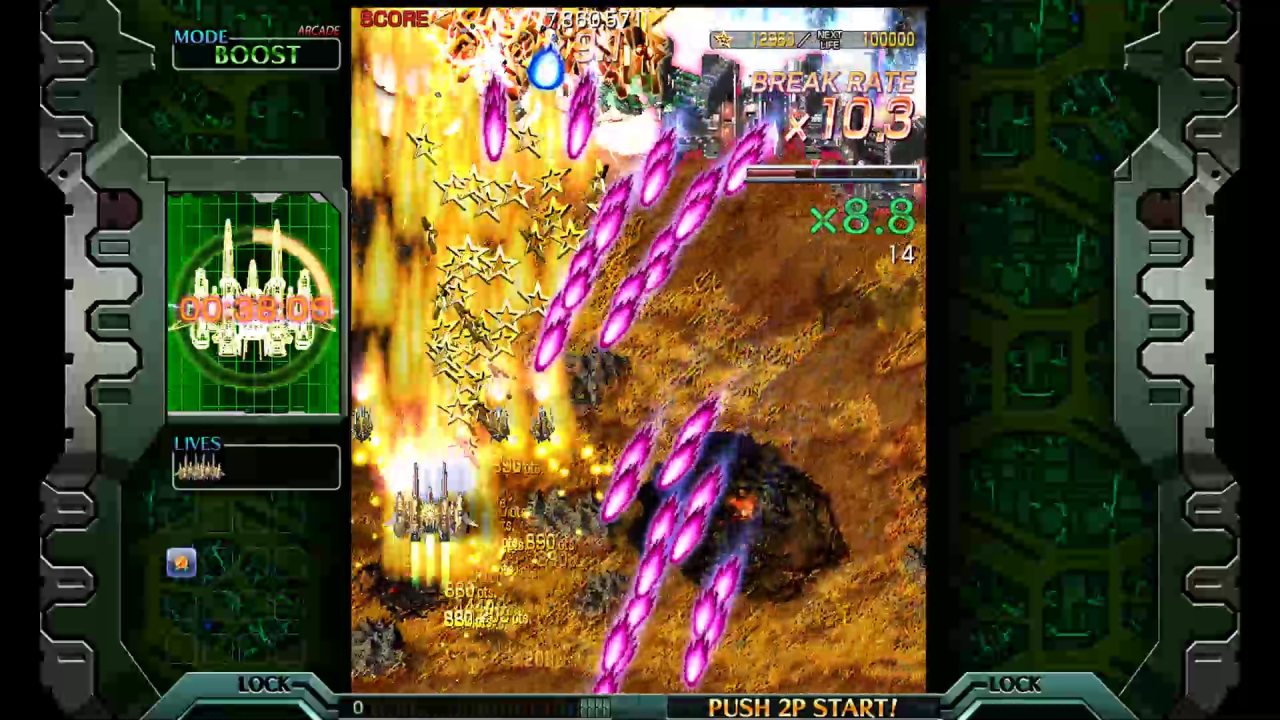 See, elsewhere, it’s triggered by pressing a button once the meter reaches a certain point – past that which simply drains it to throw a screen-clearing explosive, ending after a set amount of time. Unless, as mentioned earlier, you’re skilled enough to trigger ‘double break’, which is quite a sight to say the least. Not that you’ll really need either, provided you’re able to compensate with skill, dodging and weaving among bullet patterns and laser beams, chaining split-second decisions. Did I mention how much I appreciate that Crimzon Clover WORLD IGNITION has unlimited continues?

On a related note, seeing how large a role movement plays in just about every other genre entry – this one included – I’m half-tempted to recommend against piloting the default aircraft. The reason for that is simple: the TYPE-III model is noticeably faster, which, for me at least, made navigating the mazes created from enemy fire much easier to navigate. Like the TYPE-II model, it’s weaponry also differs from the TYPE-I, which is a bit of a shame as I did prefer that aspect of the TYPE-I. But if I had to choose between survivability and firepower, I’d pick the former just about every time, even if that lock-on mechanic of TYPE-I does come in handy for those darn boss battles…

First one of these, no problem. A cannon here, a rocket launcher there, all mere fodder for my blazing guns. But from the second onwards… the craziness just climbed, until I found myself fighting something with more weapons than… well, anything else. Bullets went everywhere. EVERYWHERE! Unfortunately, not many of them were actually mine as I was too busy dying to fight properly. But what’s a SHMUP without a little challenge? Or in this case, a lot! One bomb after another was thrown at it, break triggered again and again, and somehow… I emerged victorious. At the price of more than a handful of continues, but victorious no less. 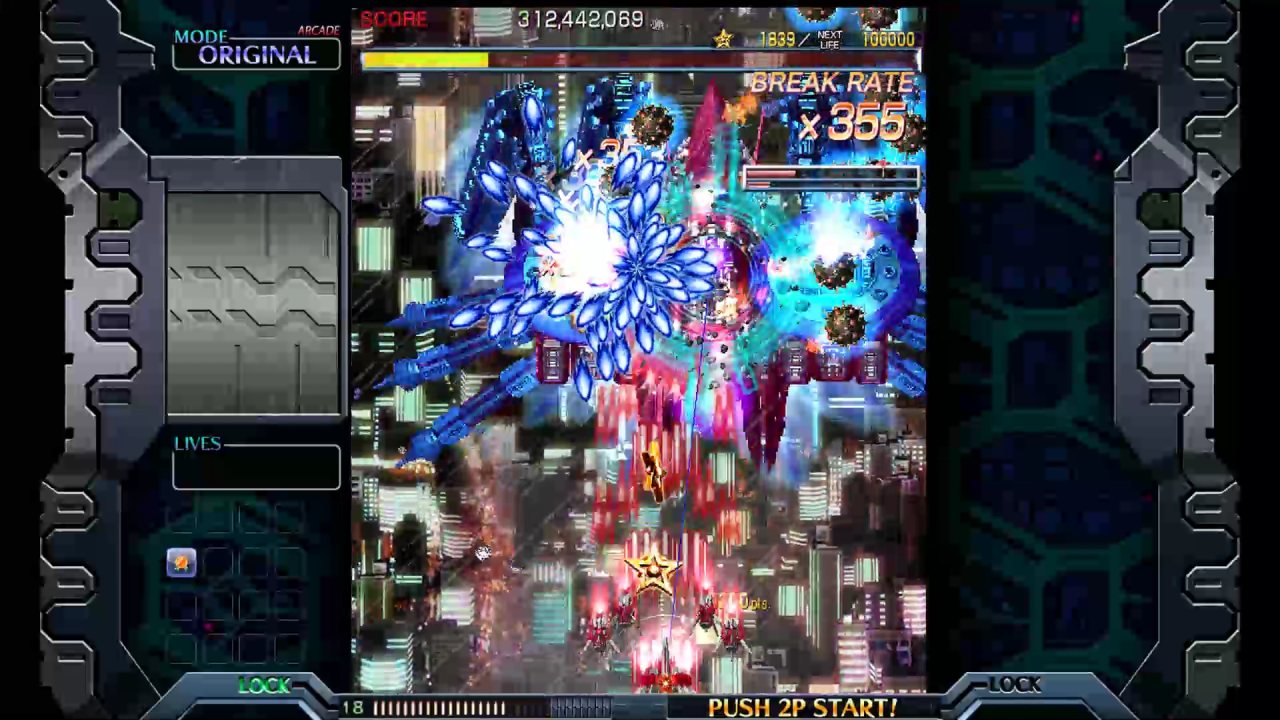 While other boss battles were nowhere near this challenging, ‘walk in the park’ is not exactly an accurate description either, as not a single was vanquished without a loss of at least three lives (and as a result, a continue). From rotating laser beams to an absolute onslaught of bullets and even a transformation or two, they sure knew what they were doing; which is to say, their best to get me killed! Joke’s on them though, because, you know, unlimited continues. I AM IMMORTAL! Or… well, something close to it. Kinda.

Right. Anyway, one thing that still surprised me during my second time through the main mode – this time on normal, a difficulty lower than arcade – was just how easy it was to make sense of it all. I mean, at first glance, chances are you’ll have a hard time adjusting to the visual assault of enemy bullets, your bullets, explosions, more explosions, more bullets, enemies, and then… BREAK MODE! YEAH! Ahem. But give it a few minutes and you should be able to tell what’s what, ready to kick ass and take names, defeating, well, whoever it is we’re up against this time around.

Someday I’m sure aliens will realize that all their invading is for naught, but today is not that day. Good thing too, as without them there would be no Crimzon Clover WORLD IGNITION. And that would be a darn shame, because this is one helluva groovy game, featuring just the right amount of action and explosions. A relatively short experience too, making it perfect for those looking to hone their skills, whether it be to set a high score or somehow pull off that ‘final boss without using a continue’ accomplishment. Best of luck, pilot.

Crimzon Clover WORLD IGNITION is available from Steam and GOG.com, at $9.99.