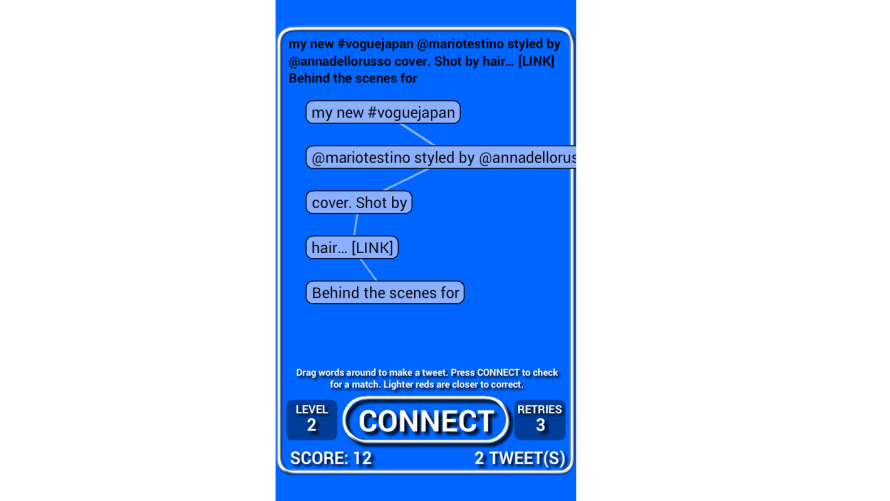 Puzzles involving word manipulation are hardly the most original sort, but they can still be quite enjoyable, and Connected Words is just that. Originally created in 48 hours (or less) during Ludum Dare 30, Teesquared followed that up with some post-compo work, to then release it on mobile devices. Groovy.

If nothing else, it’s a game that anyone can pick up, play and hopefully enjoy, as the goal – like its execution – is simple: rearrange words to form a sentence. I was a bit surprised to find that each ‘puzzle’ is actually pulled from a (seemingly) random tweet though, even if the Ludum Dare page does start with “What is it like to be John Cleese, Emma Watson, or Notch?”. Tweets don’t always contain proper sentences after all, but alas, the alternative is to enter hundreds, if not thousands of words into the game’s vocabulary, which is just crazy.

Anyway, while I had no problems forming sentences from random tweets, for the most part, lengthy ones were slightly troublesome. Grabbing onto words and making them all fit on a 4″ (ie. my Android phone) screen, while ensuring proper connections (as the line is hard to see), can be finicky. A potential solution might be to shrink the font, but that’s less than optimal, seeing how it’d make the game harder for those with reduced eyesight. Better to just deal with it instead.

Now, while the above is unlikely to affect everyone, there’s no denying or ignoring my next beef: given the random nature of sentences pulled from Twitter, the difficulty can be incredibly inconsistent, which makes chasing a high score more of a gamble than something based on skill. Not cool.

Try to get a score over 100 and let me know if you do. That is awesome.

But if you can handle those two (potential) issues, by all means, give Connected Worlds a go. Price ain’t gonna be a deal breaker after all, because… it doesn’t have one. What this mobile port does however have, is a bunch of improvements over the original: like the UI, leveling and scoring have also been tweaked, and high score tracking is now a thing. Translation: get competitive!